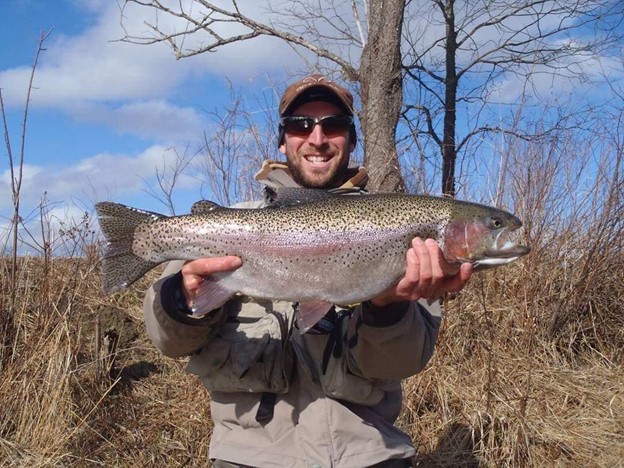 Patrick Ard is holding a trophy Rainbow trout caught in the Connecticut River in Pittsburg, N.H.

It was snowing and I was sitting by the fire planning my annual trip to Pittsburg, N.H.  I had already made my reservation for The Lopstick Lodge and was trying to plan on where to fish. I have been to Pittsburg enough to know that there really are no secret places to fish, but I do like to fish new water every now and then, so I gave my friend and guide, Pat Ard, a call.

The fly fishing community is small enough that if you fly fish on a regular basis, you will bump into just about everyone at one time or another. I usually see Pat on the river during my trips to Pittsburg guiding clients. The first time I really got to know Pat was when he did a presentation for the Great Bay Trout Unlimited meeting on fishing the Trophy Stretch in Pittsburg.

Then, last summer as I was fishing a section of the Trophy Stretch on the Connecticut River, I hear laughing. I look up the river and see Pat coming down the river with two older gentlemen that he was guiding. Then I would hear “I got another one!” followed by laughing. These two fishermen had to both be close to eighty years old. They were having a time.

As they fished through, I caught up with Pat and warned him I would be giving him a call to get some inside info. “Any time,” he replied. So, on this snowy day, I thought that if Pat wasn’t out shoveling, he would be at his bench tying flies, and I wasn’t wrong. Pat was tying flies that he uses for his clients.

Pat was tying up some flies he designed called the “Feedinator.” Pat described it as a Zebra Midge variation in blue, orange and red in sizes 14, 16, and 18. Pat, who has been fly fishing in Pittsburg since 1990, recommends using an indicator with a blue wing olive pattern with a Feedinator dropper. Pat also uses a SanJuan Worm with some wire on to get it on the bottom. Pat mentioned that the indicator helps with depth regulation and allows the fisher to get the current.

Pat mentioned that the difference between a good day on the river and a great day is getting your flies on the bottom. He will sometimes attach a small weight to the line to get the flies down. If the river is really moving, he will use more weight.

I asked Pat what advice he would give a first-timer to Pittsburg. He immediately replied, “Wait until the middle of June.” People don’t realize how cold it gets in Pittsburg, and it can stay cold. Pittsburg had already had two mornings at minus twenty degrees.

“The end of June is a great time to fish with dry flies.” It is about that time the hatches start to come out. As for equipment, Pat suggested using a nine foot, 5 weight rod with a floating line. With this setup you can swing streamers or nymphs. He also mentioned that you should be aware of the flow of the river. 150-200 CFS (cubic feet per second) is ideal for both nymphing and streamer fishing. Below 100 CFS is not ideal for streamers. Over 200 CFS would mean using weighted streamers and adding weight to your nymphing line.

For those that like top water action, July and August are a great time to use terrestrials like your grasshopper and ant patterns.

Then Pat laughed and shared that the most important date is July 1, because that is usually when the black flies are gone! I chuckled and thanked Pat for his time and asked him to send me a picture for the column. He then sent the above picture with the Monster Rainbow. The next day I got back on the phone and asked him about the fish. Fishing for Trophy Trout takes a different mindset. Pat discussed how those fish are always in the river and that there is always a chance to get a lake trout. Catching a Trophy Trout requires many hours covering a lot of water that you know has big fish, and even then you may get skunked.

I have caught some big fish in Pittsburg. The adage that big fish don’t get big because they are stupid is appropriate. They are usually found early in the morning or just before dusk looking for a big meal. Large streamers and even mouse patterns thrown against an undercut bank can get them to bite, but usually there is no rhyme nor reason to when they bite.