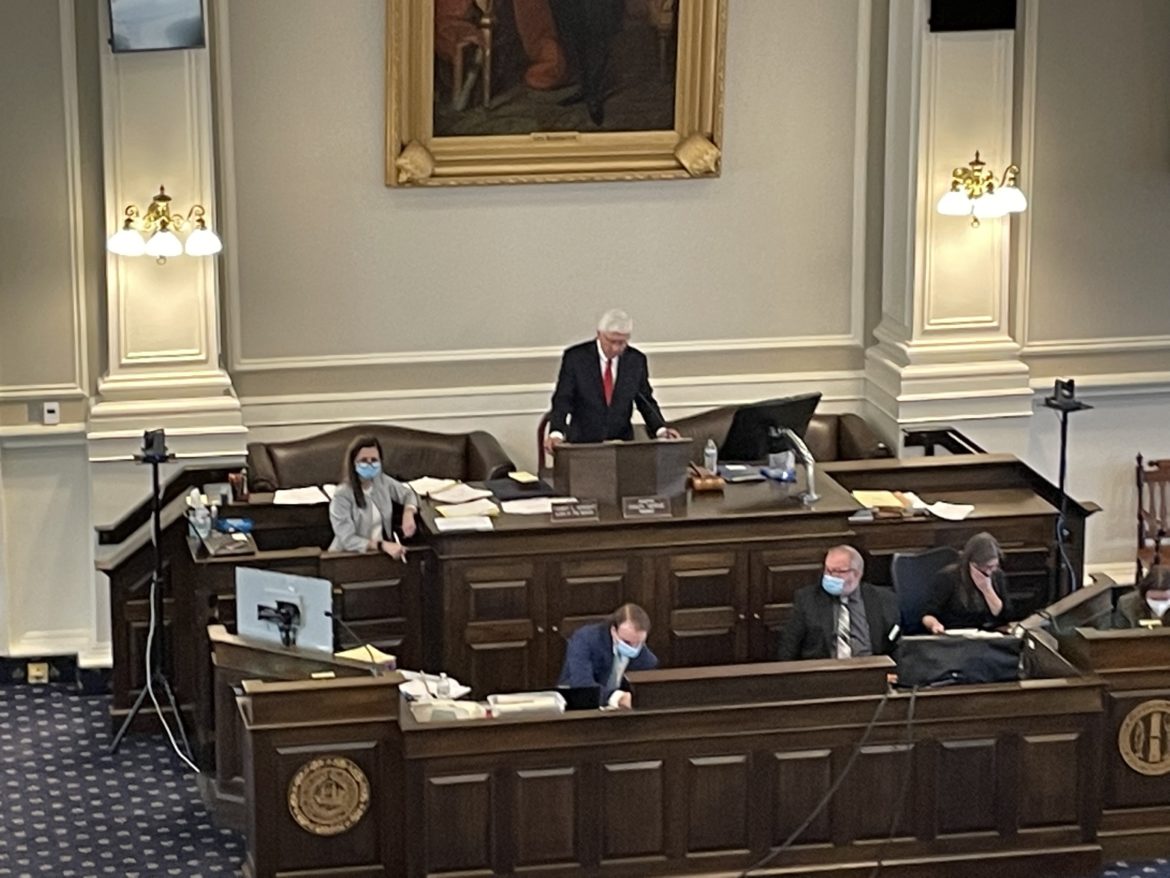 By Nancy West and News releases

CONCORD – The Senate voted on a number of bills related to Education Freedom Accounts, Redistricting, bail reform at a busy session on Wednesday in Representatives Hall in the State House.

Sen. Jay Kahn’s bill SB 432 to repeal the school voucher program inserted into the state budget was voted inexpedient to legislate in a party-line vote.

“The case for repealing Education Freedom Account funding comes from the priority to protect property taxes from going up to fund them,” the Keene Democrat said after the vote.

“School voucher costs were estimated to total $129,000 for FY 2022. However, this year’s costs are estimated to be $8.1 million. This puts the program 5,000 percent over budget in its first year with estimated costs of $16 million by FY23…The money being diverted out of our public schools through the Republican voucher program could be used to help our public schools in property poor districts provide opportunities that wealthier districts are providing their students,” Kahn said.

Sen. Jeb Bradley, R-Wolfeboro, was pleased by the defeat of SB 432 and SB 237, which was sponsored by Sen. Tom Sherman, D-Rye. SB 237 would have required annual determination of eligibility to participate in the Education Freedom Account program.

Sherman said: “We have no other entitlement that uses state taxpayer dollars with so little accountability as Education Freedom Accounts.”

People who receive food stamps and other government programs have to show they are eligible every year, he said. Sherman said his bill didn’t try to end the program, just make it accountable.

Bradley said: “I am pleased Senate Republicans defeated both SB 237 and SB 432 – legislation aimed at undermining and shutting down Education Freedom Accounts (EFA’s).”

He said the program has been incredibly popular in its first year with 1,800 New Hampshire students enrolling.

“EFA’s are making a tremendous difference and they give working families the power to choose the best educational path for their children. Passing this legislation would have kicked them off that chosen path and sent the wrong message when it comes to encouraging our students,” Bradley said.

Senate Bill 351 was also voted inexpedient to legislate. Sen. Denise Ricciardi, R-Bedford, said the bill would require the Department of Education to annually make available on its website performance measures and financial accounting for all private and religious schools receiving public funds through the state Education Freedom Accounts.

“The majority of the committee found that requiring this additional submission of such personal financial records and information from private and religious schools would be too onerous and would force these private institutions to share data publicly that could influence competition within the private school community,” Ricciardi said.

The department would require an additional staff member to handle the reporting, she said.

She said there was also concern that some of the data points might be so small that student privacy couldn’t be guaranteed.

Sen. Kahn said the bill is straight up a transparency and accountability consumer protection bill.

“If that encourages competition great. That ought to be what private sector education is all about,” Kahn said.

After the vote, Kahn said: “When public tax dollars are being diverted away from public schools, local taxpayers deserve to know how that money is being spent. SB 351 simply aimed to provide taxpayers with the same level of financial transparency that we expect from our public schools and our private and religious colleges and universities that receive public funds. Today’s vote by Senate Republicans was a vote against transparency, accountability, and consumer protection for taxpayers.”

The Senate also voted for Republican drawn maps for the House, Senate and County Commissioners as is required every 10 years.

Sherman said relative to the House and Senate maps: “In neither of those do they reflect the testimony of the people of New Hampshire at the hearings.”

A news release from the Senate Democrats said Senate Republicans voted to approve gerrymandered maps for the New Hampshire Senate districts through the passage of SB 240.

The bill will now cross over to the House for consideration.

Soucy said, “The Senate District map my Republican colleagues adopted today ultimately falls short of delivering a plan that the citizens of New Hampshire asked for and deserve.

“The Republican plan adopted today fails to reflect communities of interest and further gerrymanders the Senate Districts for political gain. I am deeply disappointed that we failed to deliver a plan that honors the requests of our constituents.”

A news release from Senate Republicans touted Sen. Bradley’s bill SB 294 making it more difficult for violent offenders to be granted bail. It passed the Senate 20 to 4.

“Everyone charged with a crime should be afforded the opportunity for bail, and that’s true regardless of income. However, not everyone should be granted bail. Violent offenders need to be kept off the streets along with those defendants who have a track record of being a flight risk or have shown they have no respect for their bail conditions,” Bradley said after the vote.

“Under SB 294, there would be 13 serious crimes, including homicide, first/second degree assault, domestic violence, aggravated/felonious sexual assault, kidnapping, stalking, trafficking, robbery, possession of child sexual images, computer pornography and felonious use of a firearm that create a challengeable presumption that a person charged with those crimes is a danger to the community. The issue of whether they get bail must be decided by a judge within 72 hours of their arrest.  Protecting victims from further violent crimes should also be our top priority,” Bradley said.

A news release from the Senate Democrats touted the unanimous vote recommending ought to pass with amendment on SB 258, Sen. David Watters, D-Dover, bill to establish protections and procedures for handling African American graves from the time period of American enslavement. The bill will next be brought before the House for a public committee hearing.

“I am extremely proud that this Black History Month, the New Hampshire Senate was able to come together to recognize the importance of preserving African American grave sites.  Over the past few decades there has been a rediscovery of extraordinary examples of African American individuals and their burial sites in New Hampshire.

“SB 258 works to ensure individuals like Ona Judge and Sampson Battis are given the posthumous respect they deserve and that their descendants and descendant communities are brought into the conversation. This is an important step forward in preserving and honoring Black history. I thank my colleagues for their support and look forward to bringing this bill before the House,” Watters said.