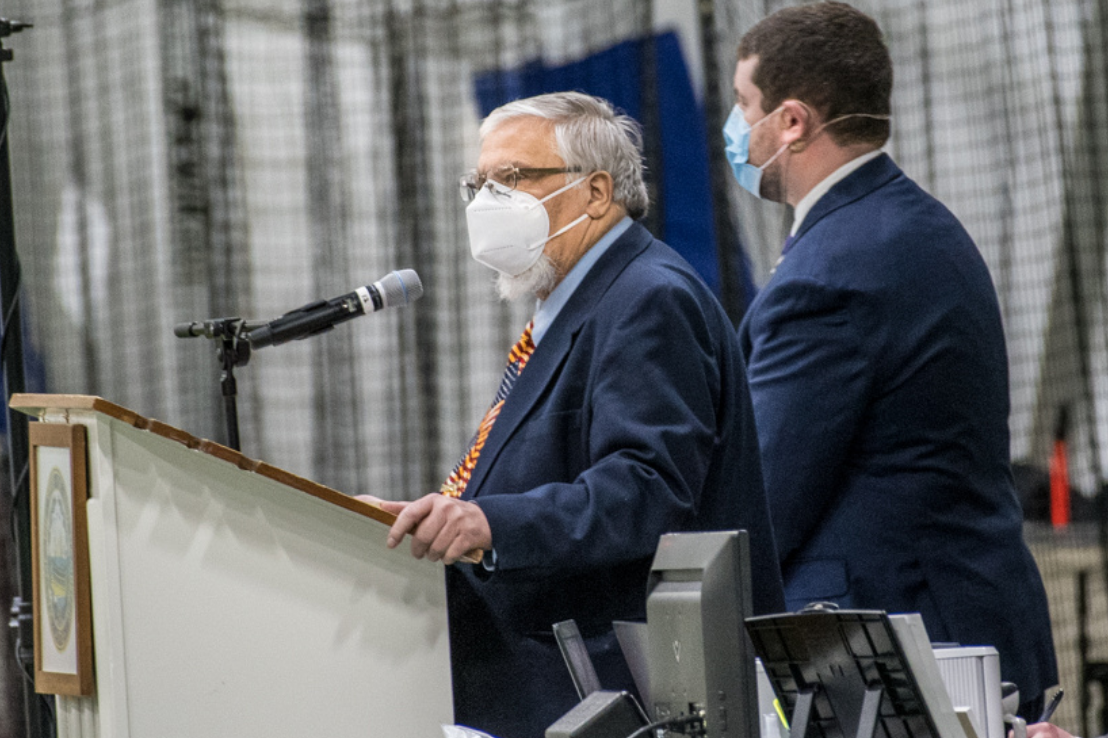 House Speaker Sherman Packard, R-Londonderry, is pictured with House Clerk Paul Smith at the Feb. 25, 2021 House session at the NH Sportsplex in Bedford.

CONCORD – Saying he will “not be blackmailed by the federal government,” nor should the state, House Speaker Sherman Packard introduced his bill to prohibit state enforcement of any federal mandate that requires an individual – as a condition of employment or any other activity – to provide proof of vaccination against COVID-19.

He introduced House Bill 1455 to the Health and Human Affairs Committee on Tuesday.

But officials for the New Hampshire Hospital Association, the Association of Counties, and the Department of Health and Human Services expressed concerns about how it might impact federal payments from Medicare and Medicaid Services if House Bill 1455 passes.

The question is whether the federal government will enforce such a measure or retaliate against New Hampshire if the bill is enacted.

But Packard, who said he has spent the past 45 years fighting federal mandates of one sort or the other, said the state should not be forced to agree to anything and he noted this has nothing to do with not supporting vaccinations.

He said he is fully vaccinated and supports vaccinations.

The Londonderry Republican said he wrote the bill three months ago before Supreme Court action over federal mandates and that he would be amenable to changes in the bill.
Supporters said there were possible ways to create carve-outs to the bill to meet Constitutional law and address concerns.

“Not only does HB 1455 reinforce the Supreme Court’s recent decision to block Biden’s federal vaccine mandate, but it also gives added assurance to our constituents that protecting medical privacy and state sovereignty is a priority here in the legislature,” Packard said in a statement after addressing the bill.

He said this would not impact private businesses that decide they want to mandate vaccines for their employees.

The state’s health-care community expressed concern that this might impact how much money the state gets from the federal government, including county nursing homes, some of which have enacted mandates for their employees to be vaccinated.

Steve Ahnen, president of the New Hampshire  Hospital Association, said while individual hospitals have made their own decisions on vaccinations the organization has concerns about how this might impact federal reimbursements.

James Monahan, representing the Community Behavioral Health Association, opposed the bill.
He noted this could put Medicaid funds at risk and add issues for non-profits.

Ian Hewitt on behalf of Cornerstone Action, a Christian advocacy organization, said the organization takes no position, though it applauded the intent. He brought a proposed amendment structurally in line with “sanctuary state” legislation in states like Vermont.

The Green Mountain state has a statement of policy that it will not enforce federal immigration law and it also directs the Vermont state agencies to not comply with federal mandates, Hewitt said.

John Williams, director of legislative affairs, and Abby Rogers, legislative liaison for the Department of Health and Human Services, recommended it be re-located in statute to a new area, perhaps labor statutes, for further consideration and some legal research on this legislation rather than remaining in DHHS statutes because it relates to employee-employer relationships.

No action was taken and the bill is due out of committee by March 10.