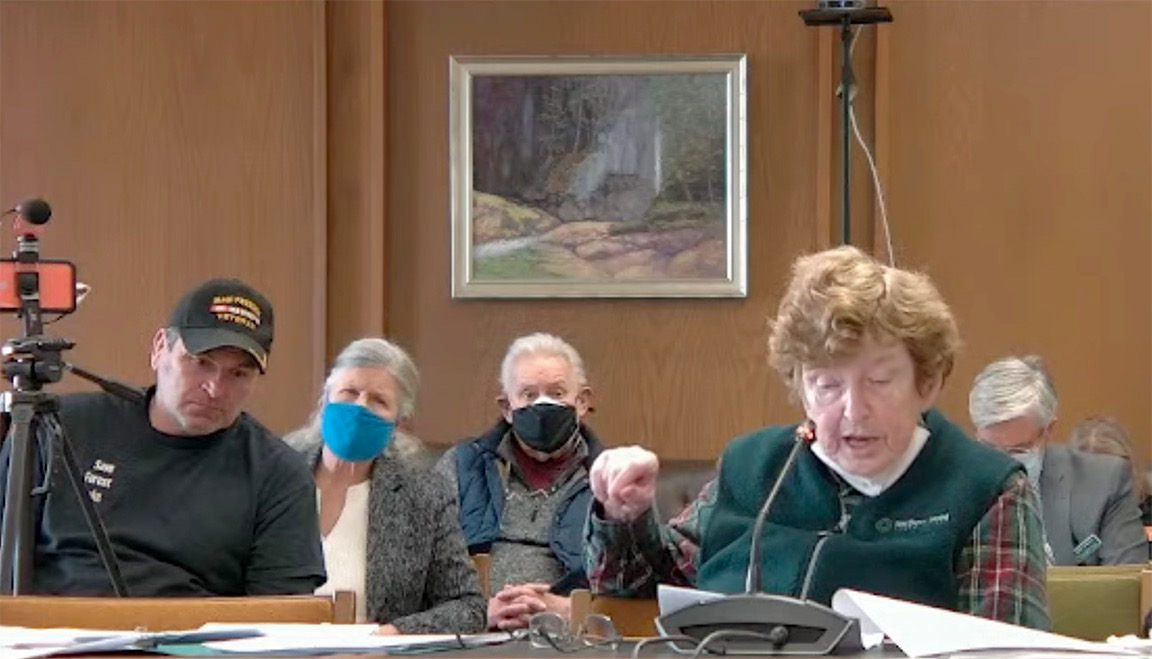 Rep. Edith Tucker, D-Randolph, right and Jon Swan, an activist and founder of Save Forest Lake, are pictured at House committee meeting Tuesday.

CONCORD — The theme during a day-long session of the House Environment and Agriculture Committee on Tuesday was solid waste and ways to reduce the amount of trash heading to New Hampshire’s landfills.

Members heard testimony on bills ranging from prohibiting the issuance of new landfill permits to the recycling of beverage containers. Testimony was overwhelmingly in favor of the proposed bills, with some expected pushback from industry lobbyists and questions about implementation from the state Department of Environmental Services.

Commenting after the live-streamed session, Adam Finkel, a clinical professor of Environmental Health Sciences at the University of Michigan School of Public Health who has a home in Dalton, said Tim White, the industry consultant speaking on House Bill 1454, gave “a short and not very coherent set of vague objections,” while Mike Wimsatt, director of the DES’ Waste Management Division, repeatedly said the DES was not taking a position on bills, but then went on to list “things we don’t like.”

Finkel had assisted Rep. Edith Tucker, D-Randolph, in drafting HB 1454, legislation that sought to address the objections raised last year against HB 177, which was designed to protect Forest Lake State Park from a proposed landfill in Dalton.

The new bill is no longer focused on state parks or even the North Country, Tucker said, but provides a balanced approach to health and the environment statewide.

The two main provisions of HB 1454 are a requirement that, prior to going through the whole permitting process for a new landfill, the developer must first complete a hydrologic study to determine the movement of water beneath the proposed site; and that the flow must take five years to reach the nearest tributary of a water body. Land with soils that allow water to reach a tributary sooner would be deemed inappropriate for a landfill.

Current rules allow a landfill to be situated just 200 feet from a water body. In the case of the proposed Dalton landfill, with a flow rate of 9.5 feet per day, contaminated water could reach a waterway in just 21 days.

Tucker pointed out that, if contamination were immediately discovered, 21 days does not allow enough time to address the problem, and monitoring is not required that frequently.

“We’re here today in part because there is an active application pending in the North Country,” Tucker said. “It’s clearly located in a tract where groundwater flows extremely rapidly, and where a major scenic river and a glacial lake are very nearby.”

Noting that the state has enough landfill capacity to last until at least 2034, she said, “There’s no landfill crisis, but there is a crisis landfill, which is why I urge you to pass this bill.”

She said the bill also would save money for the state and the developer by determining right away if a proposed site was not appropriate for a landfill. The state would not be spending the time and resources on a lengthy permit review, and the developer would not be spending money on engineers and consultants to meet the other permit requirements.

Wimsatt said he was concerned about the bill’s testing requirements that would involve setting up monitors beyond the site itself, which could present problems with access to abutters’ land, and with a provision calling for landfill operations to be shut down if contamination is discovered.

Other bills discussed were HB 1111, which would establish a committee to study extended producer responsibility in order to provide relief to the cost of municipalities in solid waste disposal; HB 1121 that would require developers of new solid waste sites to post a bond to cover remediation and compensation for damages to individual and businesses; HB 1134, which would establish a commission to study the proper labeling and disposal of “disposable” wipes; HB 1049, establishing a committee to study landfill siting criteria and methods of reducing pressure on landfill capacity; and HB 1652 that would establish a 10-cent deposit on beverage containers.

Committee Chair Howard Pearl said he expects that some of the bills could go to executive committee review soon, and that early bills will need to be out of committee by Feb. 10 at noon. The House expects to go into a full session during the week of Feb. 17.