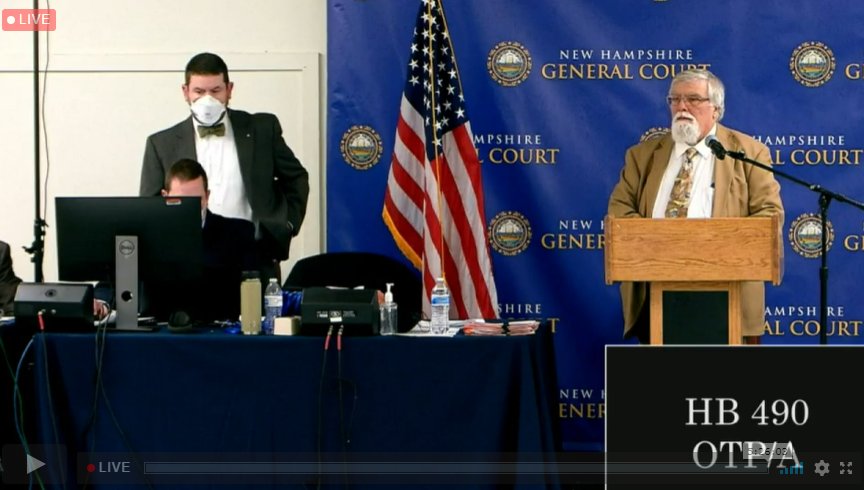 House Speaker Sherman Packard, right, is pictured in Day 2 of the House session at the DoubleTree by Hilton in Manchester on Thursday. At left, is House Clerk Paul Smith.

MANCHESTER — Two of the most controversial bills before the House this week were tabled on the second day of action this session at the Doubletree by Hilton in Manchester. House members have until March 17 to reconsider the bills or they will die on the table.

One of the bills would have prohibited any business organization or school to require an employee to have a COVID-19 vaccination and the other would have expanded the “education freedom account” program that was passed last year.

House Bill 255 would have limited liability for schools and businesses for COVID-19 exposure, but was changed to prohibit all state organizations, including businesses, hospitals, clinics, schools, churches, clubs and societies from requiring any individual to be vaccinated against COVID-19.

According to the amendment’s sponsor, Rep. Rick Ladd, R-Haverhill, the change is intended to reject federal vaccine mandates, and would allow any individual to refuse to be vaccinated for personal conscience, a religious belief, or for medical reasons, including prior recovery from COVID-19.

But Thursday, Ladd asked his House colleagues to table the bill, saying while some of the mandates have been blocked by the federal courts, his bill would create a constitutional conflict between individual rights and the personal right of business owners.

Ladd noted that vaccine mandates are counterproductive to the economy and way of life.

But Rep. David Luneau, D-Hopkinton, said any organization receiving federal funds would be put in the perilous position of either complying with the state prohibition or losing federal funding if the bill were approved.

The House also tabled House Bill 607 which would have expanded the state’s new voucher-like school choice program to allow the use of local property tax money.

Under the bill, communities could vote to join the program that would allow the use of local education property tax money to be used for private, parochial or alternative schools and homeschooling expenses much as the state education trust fund money is used in the new “education freedom account” program.

Rep. Dan Wolf, R-Newbury, said the bill would be “impactful” on local property taxes and students while it has barely been vetted by lawmakers.

“The consequences of moving forward with such a program would be enormous and long-lasting for many communities,” Wolf said, noting the current freedom account program is only four months old and already way over budget.

But Ladd said the proposal would allow school districts to join the program with a 60 percent majority vote and could end the program at any time in the same manner.

He accused the “education establishment” of spreading misinformation that the plan would divert taxpayer money from traditional schools, when it would save districts money.

The proposal would give parents the power to choose the best education for their children, Ladd said, and benefit all schools by bringing more competition to education.

But Luneau said the proposal had less accountability than the one passed last year.

“This bill would accelerate ongoing efforts to dismantle public education and siphon taxpayer dollars off to private schools with little accountability or regulation,” Luneau said, adding the school voucher program passed by Republicans last year is already way over budget.

The House also tabled House Bill 608 that would have aligned the school funding formula more with the recommendations of the Education Funding Commission which met in 2020, and Senate Bill 44 which sought to combine a number of worker education programs the Senate approved last year.