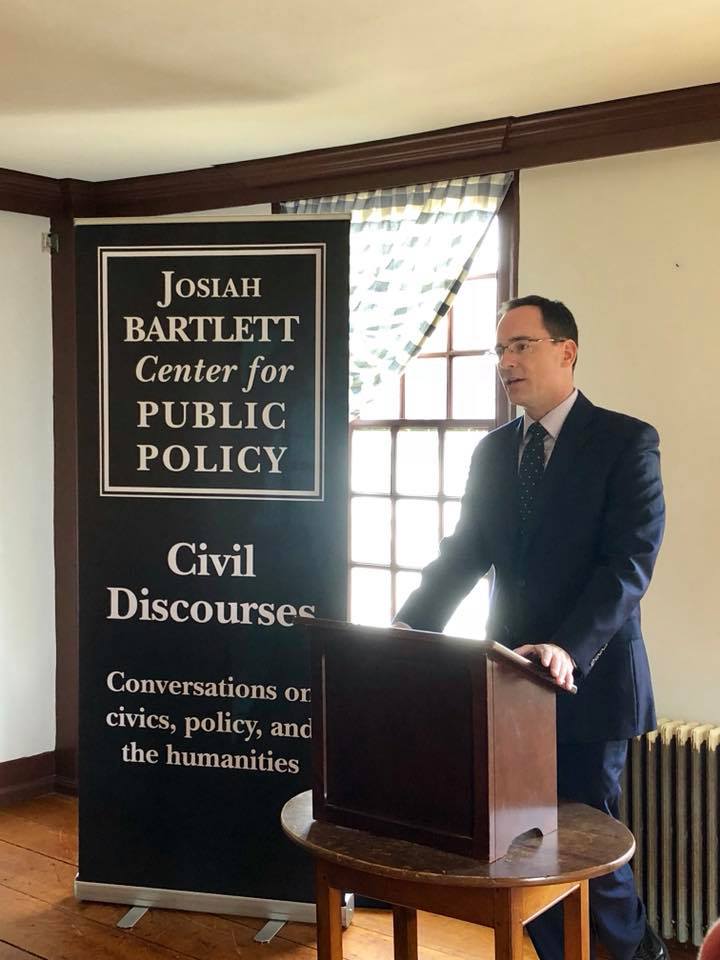 State Board of Education Chairman Drew Cline is also the president of the Josiah Bartlett Center for Public Policy.

CONCORD — Final rules for the new state “education freedom account” program, also known as vouchers, were adopted by the State Board of Education Thursday.

The board approved the rules, which will have to go before the Joint Legislative Administrative Rules Committee, despite concerns raised over qualifying students with disabilities and one section that could require school districts to pay for state mandated costs without funding, which could be unconstitutional.

The rules were amended to address a lengthy list of concerns raised by attorneys in the Office of Legislative Services when the rules were first presented to the legislative committee last summer.

Legislative Services attorneys suggested the department and lawmakers consider changes to the statute to correct ambiguities, possible conflicts with existing statutes and federal law, the improper delegation of authority to the scholarship organization and lack of oversight, as well as provisions clarifying conflicts between the statute and rules.

In a letter to Legislative Services, Amanda Phelps, Administrative Rules Coordinator for the Department of Education, addressed some of the changes the Legislative Services attorneys sought, but that were not made, largely due to conflicts in law or requirements.

The department did address issues raised about confidential information and informing parents with special needs students that joining the program would end a school district’s obligation to provide special education services for their child.

Changes in the rules did address one key issue raised at public hearings but did not resolve the issue.

The concern is allowing physicians anywhere in the country to designate a student with disabilities triggering the need for additional services and providing additional money for the student’s parents to use for his or her education.

But the rules would still allow a physician anywhere in the country to make that determination. Phelps said the section is intended to allow the additional aid for a student who previously has not been qualified as disabled, but would be under the program.

Board chair Drew Cline said the problem is there are two definitions for qualifying as disabled, one approved in statute prior to approval of education freedom accounts, and then the one in that statute.

It said the section is still an issue for legislative services, but boils down to two conflicting statutes, noting it was left to rule making to clarify the process.

The statute was intended to “give us a process with how to deal with quality special education funding for a student not in an assigned public school,” he said.

“Ultimately the legislature will have to come back and add some clarity there,” Cline said.

In a letter to the board, attorney Gerald M. Zelin, representing the New Hampshire Association of Special Education Administrators, said the rules allow families to bypass the state special education qualifying protocols and will receive a higher amount of state aid.

He said the private school would need to include the student in its federal share of Individuals with Disabilities Education Act money, and account for the cost of services.

Zelin suggested the section be removed from the rules, but the board did not do that.

He also suggested the rules include a provision that would prohibit a student with disabilities with a freedom account who attends a private school, from attending its local school district to receive special services.

He said the provision is in the statute, but would be unconstitutional because it would require the local district to pay for special services for the student without any state aid for those services.

“Put a different way, offering the advantages of RSA 193:1-c to EFA students allows them to ‘have their cake and eat it too,’” Zelin said. “As a solution, the NHASEA recommends a rule clarifying that an EFA student is disqualified from taking advantage of RSA 193:1 need to clarify what rights a special education student would lose under a ‘parental placement’ to participate in the program.”

He also raised constitutional questions about a provision that gives the scholarship organization the discretion to determine what are allowable expenses under the program, saying that would need to be determined by the legislature.

“The State Board may be able to save RSA 194-F:2, II(o) by doing what the legislature failed to do – by adopting standards for implementing that provision,” Zelin writes. “For example, one standard might say that the scholarship organization shall not approve any program that teaches hate, bigotry, or divisive concepts.”

Phelps said her office will work with Legislative Services so that the legislative committee will approve the rules as presented and not grant conditional approval.

The Children’s Scholarship Fund New Hampshire manages the program and approved approximately 1,600 applications receiving $8 million in scholarships, with the money coming from the Education Trust Fund, which provides adequacy grants to public schools including charter schools.

Program advocate, Education Commissioner Frank Edelblut had predicted few students would join the program the first year and did not budget the $8 million.

The controversial voucher program has been called the most expansive in the country and was included in the budget package approved mostly down party lines by lawmakers and signed by Gov. Chris Sununu. A school voucher program was a priority this session for Republican lawmakers.

Under the new law, a parent seeking to establish an account, would receive between $4,500 to $8,500 per pupil to spend on tuition to any private, religious or alternative school and on other related educational costs including home schooling, computers, books etc.