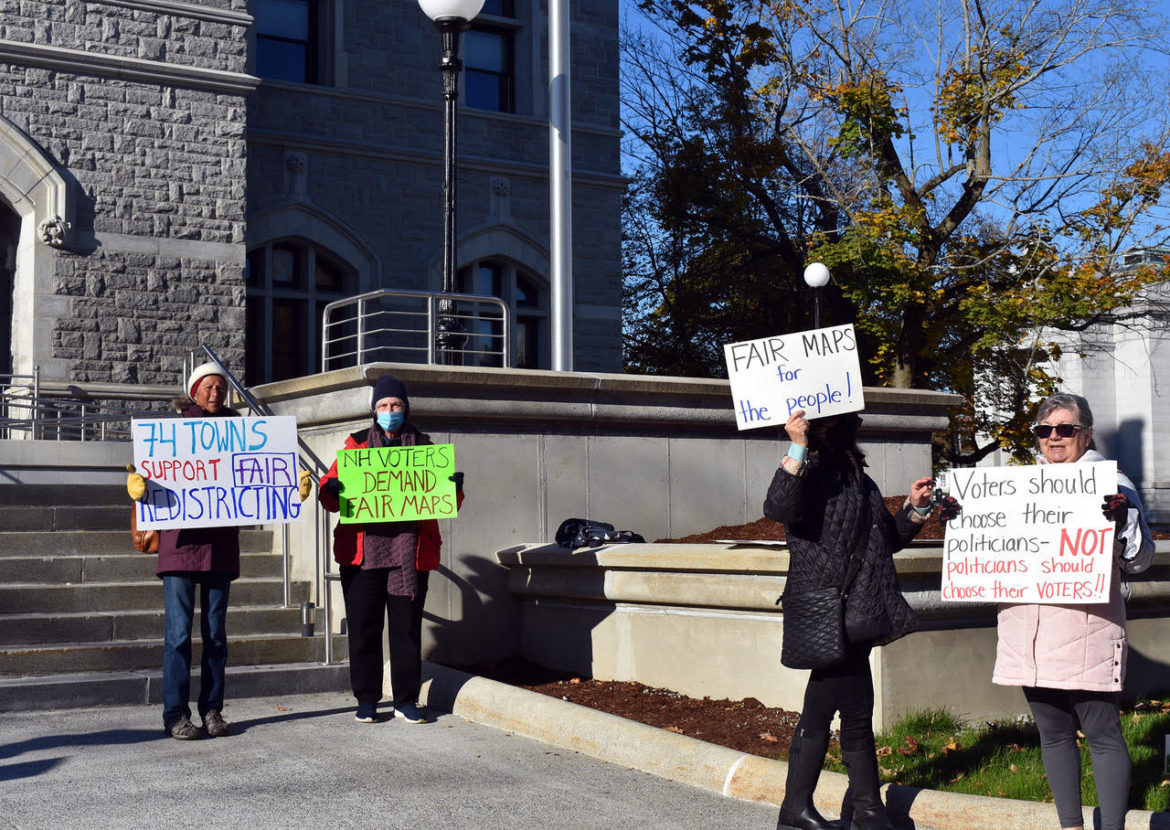 Citizens gather outside the Legislative Office Building on Nov. 4 to voice their support of fair redistricting.

CONCORD — Democrats were quick to seize upon a comment by Windham Republican Rep. Bob Lynn to assert that the GOP’s sole motivation in its redistricting proposals is to gain political advantage.

During the Nov. 4 session of the House Special Committee on Redistricting, Rep. Marjorie Porter, D-Hillsborough, asked whether either side used the party breakdown in the towns to help make their decisions in assigning districts.

Lynn responded that, apart from his own town of Windham, which he knows is Republican-leaning, he isn’t even sure which towns are “blue” or “red.” He said he was not involved in the details of drawing up proposed redistricting maps, “but I guess your question is, ‘Were political considerations something that were in the mix?’ Of course they were.”

Immediately after the session closed, Sen. Rebecca Perkins Kwoka, D-Portsmouth, issued a statement saying, “The House Republicans’ proposed re-drawn Congressional districts map is among the most egregiously gerrymandered proposals we’ve ever seen in this state. And today, Representative Lynn removed any doubt by confirming that, indeed, political influence — and not the simple adjustment of the district for population changes of the state — informed their proposal. The House GOP proposal is so obviously motivated by putting party over country, that even members of their own party can’t deny their own gerrymandering.”

Rep. David Cote, D-Nashua, who is the ranking Democrat on the redistricting committee, said, “Today’s presentation confirmed what we have known all along — that Republicans have no reason outside of partisan politics to justify the drastic re-drawing of Congressional Districts they have proposed. The public has not asked for their Congressional Districts to be upended, which makes the Republican claim that certain towns must be connected for the first time particularly laughable. Republicans clearly do not believe they can win Congressional seats without rigging the districts in their favor, as today’s presentations confirmed.”

Rep. Ross Berry, R-Manchester, saying he had drawn the short straw to present the Republican proposal, explained that his goal was to bring together the southern-tier towns that traditionally have been split between two congressional districts.

“I represent southern Manchester and the town of Litchfield,” Berry said. “Manchester is in CD1 and Litchfield is in CD2. That’s because, over the years, these districts have grown and mutated. The southern tiers continue to be divided in the attempt to balance it out, which ends up with the district as it is today, with its jagged edges …. I look at it and say, OK, why can we not put the majority of the Manchester southern tier back together?”

In order to accommodate that population shift into District 1, the proposal moves Portsmouth, Dover, Durham, and Rochester into District 2.

The Democrats’ proposal focused only on balancing out the 17,945 additional District 1 residents in the latest census, and it involved realigning a single town, Hampstead.

“There have been minimal changes in the population between the existing districts since the last census,” Rep. Matthew Wilhelm, D-Manchester, said, “so the map should also make minimal changes.”

Brian Biehl, deputy director of Open Democracy Action, issued a report on the Map-a-Thon Mapping and Technical Team’s analysis of the competing congressional maps, concluding that “the proposed Republican map has been gerrymandered, with Congressional District 2 ‘packed’ with Democrats in a manner similar to the 2010 NH Executive Council 2. This shift makes District 2 less competitive for Republicans, who are vastly outnumbered, but retains a higher percentage of Republicans in District 1.”

By contrast, the Democrats’ proposed map has an even lower deviation in population between the districts — 51 persons — and has fewer changes from the current map. However, it also increases the number of split SAUs, from eight to nine, and has “some issues with compactness, particularly near Nashua and north of Lake Winnipesaukee.” The report also notes that, like the current congressional map, county and school district boundaries are not well-preserved.

The negative aspect of the Map-a-Thon proposal, the report notes, is that it moves 22 towns and 154,503 people into different districts — less than the Republican plan but more than the Democrats’ plan. “These adjustments were required in order to decrease the number of split communities of interest,” it states.

The debate over congressional districts was the most hotly debated during Thursday’s session, but several objections were raised about floterial districts comprising several towns. Some proposals included as many as 10 or 11 communities in such combined districts. Some floterial districts are necessary to accommodate the leftover population in assigning representatives.

Based on the state census of 1,377,529 residents in the state, in order to achieve a 400-member House of Representatives, the committee determined that the “ideal population” to qualify for a representative is 3,444. If a town exceeds or falls short of that number, the difference must be made up, and that determines the need for floterial districts.

Rep. Marjorie Smith, D-Durham, said she views it as important to give as many towns a representative as they qualify for, which means the distribution will not be perfect, but it can be close.

The special committee will be reconvening on Tuesday, Nov. 9, in Representatives’ Hall to hear from the public on the various redistricting proposals. Copies of the proposed maps are posted online at