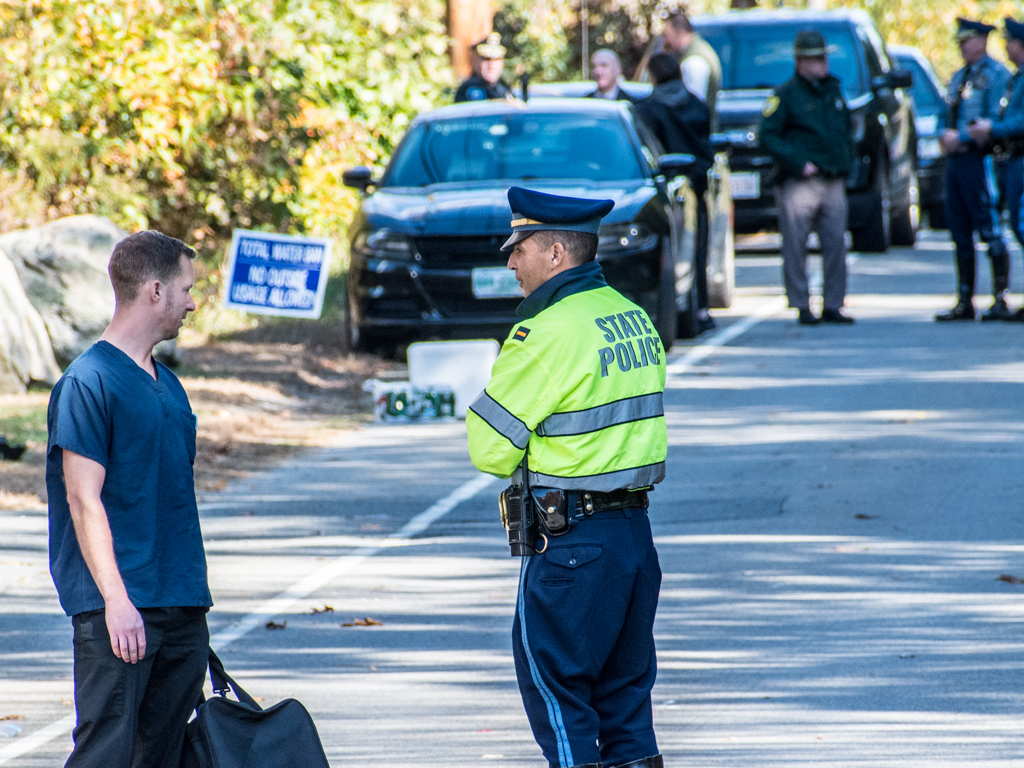 Police on site in Abington, Mass., where the body of Elijah Lewis, 5, of Merrimack was found Saturday morning.

ABINGTON, Mass. – On Saturday morning, law enforcement located a body in Abington, Mass., in a wooded area off Chestnut Street they believe is Elijah Lewis, 5, the missing Merrimack boy.

The sad news was announced at a press conference Saturday, eight days after the search began at 7 Sunset Drive in Merrimack and about a month after any independent people had seen the boy. Nine days ago, the Division for Children, Youth and Families became involved.

“While identification is pending, the appearance and condition of the body lead investigators to believe that the body is that of five year-old Elijah Lewis,” according to a news release from Attorney General John Formella.

Gov. Chris Sununu weighed in on the release.

“Horrific tragedies like this often spur countless hours of dedication by so many,” Sununu said. “On behalf of the people of New Hampshire, I would like to thank New Hampshire and Massachusetts law enforcement and everyone else involved for their tireless focus this past week on bringing closure to this search. May Elijah rest in peace.”

The medical examiner in Massachusetts will conduct an autopsy Sunday to determine the identity of the body, and the exact cause and manner of death.

Both pleaded not guilty on Wednesday. Two of Dauphinais’s brothers spoke to reporters that day asking her to provide information to help find Elijah, who was reportedly one of Dauphinais’s six children.

Throughout this week, lead investigators have also been assisted by the New Hampshire Fish and Game Law Enforcement Division, the Hillsborough County Sheriff’s Office, resources and personnel through the North East State Police and Administration Conference (NESPAC), the Maine State Police, the Manchester Police Department, and the New York City Transit Police.

“We extend our sincere thanks to all those who have assisted thus far. While we are deeply saddened by this tragic situation, we are ready for the work ahead.”

This matter is now considered a suspicious death, and the investigation remains active and ongoing. Anyone who may have information on this crime is asked to contact the Merrimack Police Department’s Crimeline at (603) 424-2424 or New Hampshire State Police Communications at (603) 223-4381 or 603-MCU-TIPS (603-628-8477). Additional information will be released as it becomes available while protecting the integrity of the investigation.