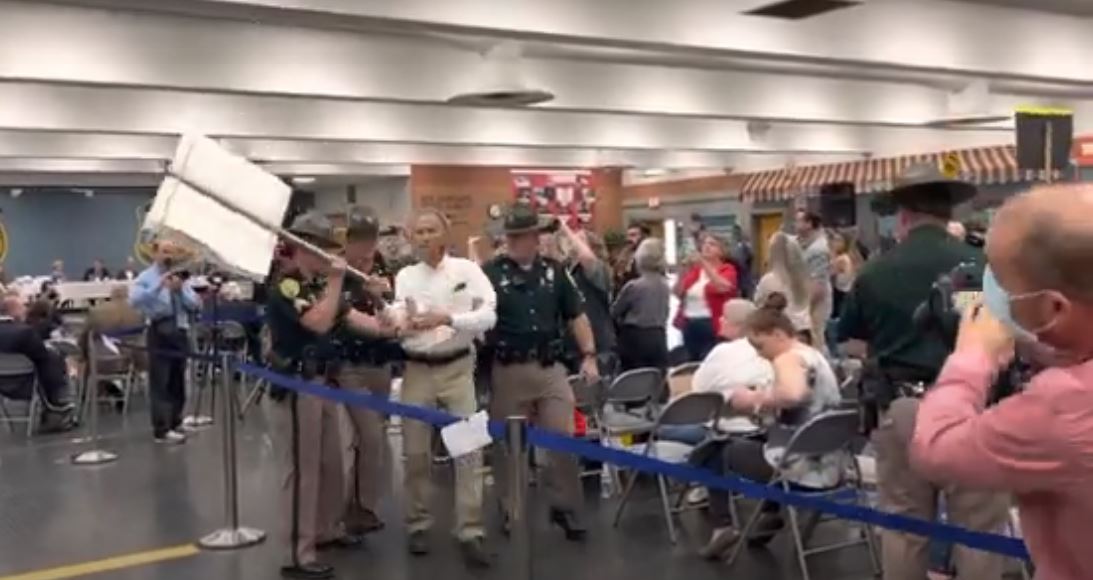 An unidentified man is pictured being escorted out by state police from Wednesday's Executive Council meeting at the Police Standards and Training Council in Concord.

Video of the crowd’s reaction to Wednesday’s no vote: https://youtu.be/YzbqmySNurY

CONCORD – At a heavily attended meeting that saw the arrest of eight anti-vax mandate protesters, the Executive Council voted 4-1 to reject two controversial federal contracts to build out the state’s vaccine program and get more people vaccinated against COVID-19 through regional health networks. It makes New Hampshire the only state in the nation to reject such funding.

The lone vote in support of the contracts, which totaled $27 million, was Executive Councilors Cinde Warmington, D-Concord, who said by not supporting the money, the state would be turning its back on those who want to get the vaccine.

Republicans Janet Stevens of Rye, Ted Gatsas of Manchester, David Wheeler of Milford, and Joe Kenney of Wakefield all voted to oppose the contracts.

The crowd shouted: “We won” and “thank you.”

The matter now goes to the legislative Fiscal Committee for a vote on Friday.Warmington said that turning down the contracts would deny access to people who want to be vaccinated, and would delay the state’s efforts and its businesses to get back to normal from the pandemic. She stressed it would not require anyone to get a vaccine.

Gov. Chris Sununu agreed with her and supported the contracts, which had been tabled a month ago and stayed on the table after protesters disrupted a previous meeting.

Wheeler said accepting the money would allow the federal government to access personal data rather than an opt-in provision. When asked by Wheeler, the governor said he could look to discuss in the future with the legislature an opt-in rather than an opt-out vaccine registry.

Gatsas said earlier in the meeting the council approved $13 million more for a mobile vaccine van for COVID-19 and that this would just be adding another $27 million. He said that new money is not necessary.

Kenney said there is something about this particular vaccine that concerns people and that most want to be able to conduct their lives in the way they want to.

“They look at New Hampshire, one of thirteen original colonies the Live Free or Die state. I still have reservations about the overarching authority of government on New Hampshire,” Kenney said, despite the attorney general’s opinion that the language would not impinge on that sovereignty.

Sununu asked, of the billions in dollars the state has taken from the federal government for COVID-19 has the state ever capitulated?

“Never. We have never done it. We will never do it. To say there is some precedence here is totally false,” Sununu said.

Kenney said he is concerned about restrictions on employees losing their jobs but Sununu said the state government is not doing that.

“Hospital employees are not ‘our’ employees,” referring to state employees who are not being required to be vaccinated as a condition of employment. Private businesses have that right to make that condition, he said but New Hampshire is not doing that.

Warmington said this funding has nothing to do with that.

“You are taking away vaccinations from the people who want it,” she said. “Most have chosen to be vaccinated.”

Warmington said Kenney was “listening to a very small misinformed minority,” and that if he wanted to get back to a booming economy in his district he should support the contracts.

Stevens said language within the terms or conditions is not fully supported by all council members and that she felt the state could do without the money.

Following the vote, Sununu released the following statement: “The people of New Hampshire know I call the balls and strikes as I see them, and today’s vote by members of my own party on the Executive Council was a total disservice to the constituents we serve.

“The Attorney General and Department of Health and Human Services addressed all of the Councilors’ concerns, and still they voted to send $27 million of our taxpayer dollars back to Washington instead of spending it here to help get our state out of this pandemic. The vote showed a reckless disregard for the lives we are losing while they turn away the tools our state needs to fight and win this battle against COVID,” Sununu said.

Senate Democratic Leader Donna Soucy, D-Manchester, said, “There was absolutely no logical reason to reject these funds. Rather than listening to the Attorney General and the Governor, the Republican members of the Executive Council instead chose to listen to the same reckless protestors who shut down their last meeting and threatened the safety of our state employees. I am extremely disappointed that Governor Sununu made no effort prior to today’s meeting to dispel the misinformation that has rooted itself within his party and that New Hampshire’s vaccination and recovery efforts are once again delayed in the name of fantastical extremism.”

PROTESTERS CONVERGE, ARRESTS MADE
At the start of the meeting, state police said there were 173 opponents and protesters in the building and police said more than that were outside but could not get in because of room capacity issues. Nine people were ultimately arrested.

Protesters said they were against mandates for vaccinations and they held signs which read “You can have my job but not my freedom,” “H-C Workers Against Mandates,” and “Vaxx Mandates are Medical Violence.”

Outside the doors, they were chanting and taunting state employees saying they worked for “a tyrant.”

Many said they believe that by accepting the contracts, the state must now cede to federal powers related to COVID-19 vaccines and other future Biden Administration mandates were in attendance.

About 30 uniformed police were inside the meeting while others were outside as the room was at capacity.

Terese Grinnell, a vocal opponent of the contracts went on social media before the meeting to call all “Patriots” to attend and oppose the state accepting “money to digitalize away your freedom.” She said a “yes” vote would make the council’s constituents “absolutely livid” and that a court injunction would be sought before the fiscal committee meets.

Grinnell said she was concerned Sununu influenced Republican House leadership to force the former chairman of the fiscal committee, Republican Kenneth Weyler, to step down.

Grinnell was not seen after the meeting; protesters called for their group to go to Merrimack County Jail to support “Terese.”

CONFIRMATIONS
The council confirmed a number of individuals, mostly to reappointments, including Helen Hanks of Lochmere as commissioner of the Department of Correction.

It confirmed Albert Derosa of New Durham to the Fish and Game Commission, succeeding Frederick Bird, and Jonathan K. Hanson of Bow as director of the Division of Administration at the Department of Correction.

It denied a governor’s nomination of Ryan Kaplan of Rye to the New Hampshire Real Estate Commission after Warmington expressed concern for his lack of real estate experience and the fact that there are already a number of Seacoast representatives on the board.

DOVER, ROCHESTER TOLL BOOTHS TO BE AUTOMATED
On a 3-2 vote, the council approved a Department of Transportation request to enter into a contract to automate the tolls at Rochester and Dover toll plazas.

“Why not stay with choice? Why not accept cash?” Wheeler asked.

Both cast the two dissenting votes.

The contract goes to Kapsch TrafficCom USA and turnpike funds will be used to pay for the conversion.

AFGHAN ARRIVALS
Councilor Wheeler asked if the estimated 175 Afghan refugees that will be received and resettled in New Hampshire will be COVID-19 tested and or vaccinated before coming.

They go through a federal medical screening and they are being tested, Lori Shibinette, Commissioner of the Department of Health and Human Services said, leading the crowd to stir and “hiss.”

Sununu said they go through a vaccine process for measles as well and he said that the implication from the federal government was that it is required.

“We don’t want them here,” one woman shouted.

“Get our jobs, too,” another said.