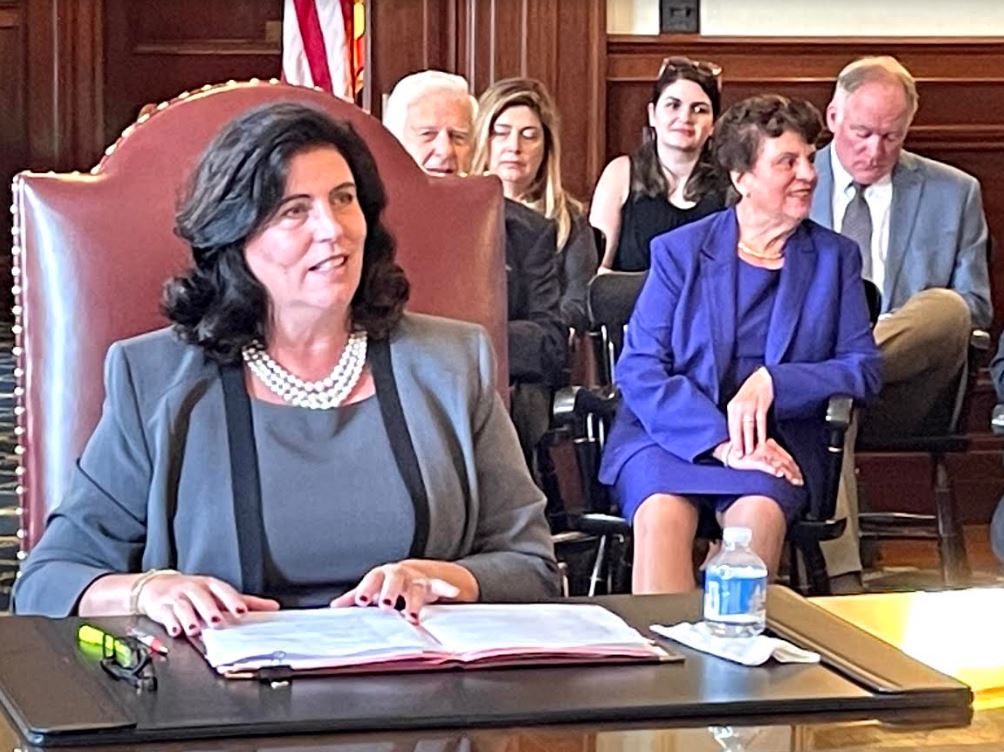 Ellen V. Christo is pictured Wednesday at a public hearing at the Executive Council on her nomination to the Circuit Court.

CONCORD – Two of Gov. Chris Sununu’s nominees for the Circuit Court were highly recommended during public hearings on  Wednesday.

As required by statute, the Executive Council held public hearings on the nominations of attorneys Ellen V. Christo and Todd Prevett.

A third nominee, Michael Zaino, was not able to attend a public hearing his nomination due to health concerns. It will be rescheduled.

Christo, who graduated from what is now UNH School of Law, worked in Boston before coming to Shaheen & Gordon PA in Concord and is currently the legal counsel for the New Hampshire company TCI.

She was elected to Hampton Falls School Board and volunteers on child food security and the Army of Masks.

“This would be the culmination of my 30 years of experience….and frankly I miss being in the courtroom,” Christo told the council.

She applied for the job, knowing from what she learned that it is a hard one but also rewarding.

She said the job requires that she be patient, fair, and respectful and that the public should expect that judges be wise, calm, and well-prepared.

“In general terms, I am constitutionalist. I believe judges should apply the law not make the law,” Christo said.
She was also asked by Kenney how she defines “injustice.”

In the Circuit Court, she said that was having a judge who was not prepared, does not treat people respectfully or listen.
Christo’s LinkedIn account is here https://www.linkedin.com/in/ellen-christo-esq

She said the backlog of the courts needs to be addressed immediately.

In January, there was a nine-month backlog, noted Executive Councilor Janet Stevens, R-Rye.

Christo said she could be most effective in the probate area but she could work in all three areas. She also noted more mediation and quick decision-making from the bench would help alleviate the backlog.

Christo conceded she did not have a criminal law background but she was willing to learn.
“I understand there is a learning curve in every new job,” Christo said.

Stevens asked about remote technology and its use in the courts, going forward.

“I think it can be a really useful tool,” she said, in particular for status conferences. “But in hearings where you are looking at the credibility of the individual in front of you,” she said, she would prefer that it be handled in person.

Prevett, an Amherst attorney, is a hearings examiner for the state office of Professional Licensure and Certification and handles mediation issues in his law practice.

Prevett worked for the Division for Children, Youth and Families prosecuting child abuse and neglect cases, was a municipal prosecutor for the town of Fitzwilliam, Weare, and New Boston, and for the past 14 years has been a general partner with his wife specializing in mediation, arbitration, and neutral case evaluation.

He has been involved in public service in his community, as well as coaching martial arts, as a mock trial coach and as a board member for the New Hampshire Guardian Ad Litem.
Prevett said he speaks Spanish but said he would not act as a translator on the bench.

“The Circuit Court is really all about people,” Prevett said. He said his past as a neutral factfinder has helped him develop a demeanor befitting a judge.
He explained his judicial philosophy as making people feel welcome, listened to, and allow them to leave with their dignity.
“I don’t think I will be dealing with a lot of lofty Constitutional issues,” on the Circuit Court level, Prevett said.

He said he would like to see efficiencies and advances made to deal with the case backlog.
Asked about implicit bias, he said being aware of it and speaking about it is important in a courtroom.

The two judicial nominees may come up for a vote at the next Executive Council meeting scheduled for Sept. 15.

No date has yet been set for Zaino’s public hearing, which is required before a vote can take place.

A LinkedIn account for him is here https://www.linkedin.com/in/zainolaw6039105146
It indicates Zaino is a criminal defense attorney in private practice in Hampton, worked as an assistant county attorney, and was an adjunct professor at Granite State College.