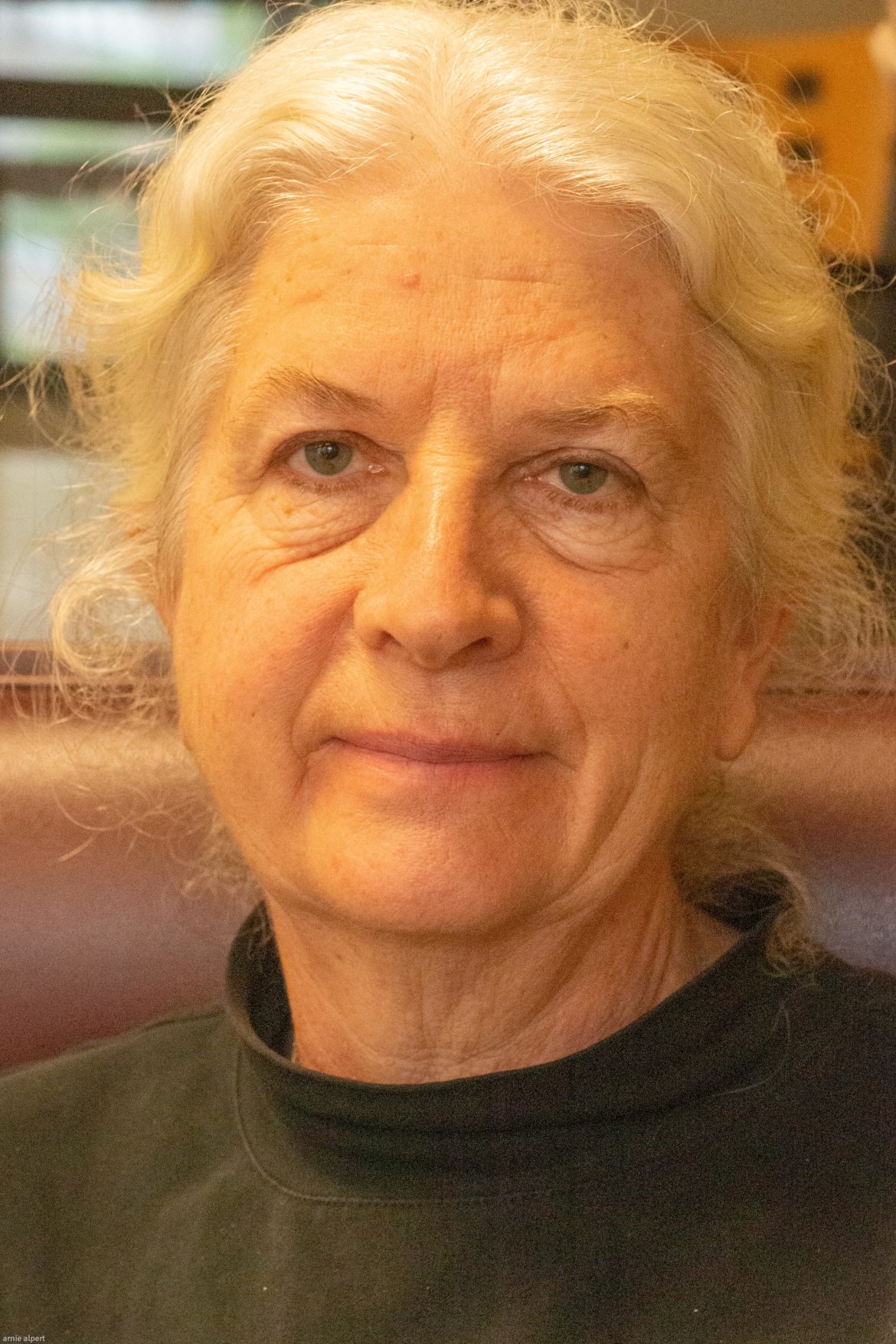 ACTIVE WITH THE ACTIVISTS
By ARNIE ALPERT for InDepthNH

MANCHESTER—When Martha Hennessy was released from a federal prison and transferred to an “adult residential re-entry” program in Manchester, it wasn’t her first trip to the Queen City or her first entanglement with the criminal legal system.  Hennessy says her first arrest came in 1979, when she and a group of apple-pickers were arrested for an anti-nuclear protest at the office of Public Service Company, then the lead builder of the Seabrook nuclear plant.

You could call her a “recidivist,” but to label her a “violent recidivist,” as a federal judge has done, turns the truth upside down.

The truth is that Martha Hennessy was arrested in 2018 with a group of other Catholic pacifists engaged in a thoroughly peaceful protest against nuclear weapons.

Hennessy’s latest arrest came on April 4, 2018, not by coincidence the fiftieth anniversary of the assassination of Martin Luther King, Jr. and the fifty-first anniversary of his most memorable indictment of militarism and the U.S. war in Vietnam.  With six others, Hennessy delivered an indictment of the U.S. government’s most destructive system for delivering nuclear weapons, the Trident submarine.  That they made their statement inside the U.S. Navy’s submarine base at Kings Bay, Georgia, is what triggered federal felony charges.

The group calls itself the “Kings Bay Plowshares,” attempting to take seriously the Biblical injunction to beat swords, or missile-bearing submarines, into plowshares.

Trident is the name of the ballistic missiles carried on Ohio-class submarines.  Each sub carries twenty missiles, called SLBMs, or submarine-launched ballistic missiles.  “Each Trident SLBM can carry up to eight nuclear warheads, but normally carry an average of four or five warheads, for an average load-out of approximately 90 warheads per submarine,” according to the Federation of American Scientists’ 2021 report on the U.S. nuclear arsenal.  The warheads vary in destructive capacity, from 8 kilotons to 455 kilotons of TNT equivalent.  According to facts compiled by the Kings Bay Plowshares, the fleet of 14 Ohio-class subs carries 340 megatons of thermo-nuclear firepower.

For comparison’s sake, the bomb that wiped out Hiroshima in 1945 was about 15 kilotons.  In other words, one submarine carries the equivalent of more than 1600 Hiroshimas.

According to the International Committee of the Red Cross, a “limited nuclear war” involving only 100 Hiroshima-sized weapons would so disrupt the climate to cause the deaths of one billion people.  “The consequences of a large-scale nuclear war would be even more catastrophic,” says the Red Cross.  An all-out exchange between the USA and Russia with the weapons both countries are allowed under the New START Treaty could transport 150 million tons of soot into the upper atmosphere, dropping world temperatures by an average of 8 degrees centigrade for several years, the international agency concluded.  “Agriculture would stop, ecosystems would collapse and most of the human race would starve.”

“The ultimate logic of Trident is omnicide,” says a poster the Plowshares left behind at Kings Bay.

While the United States may not have an intent to initiate nuclear war, neither has it foreclosed the option.  The Trump administration, like those before it, explicitly refused to adopt a “no first use” doctrine.  The Pentagon’s most recent Nuclear Posture Review upholds the first strike option and says,  “It remains the policy of the United States to retain some ambiguity regarding the precise circumstances that might lead to a U.S. nuclear response.”

While campaigning for president in New Hampshire last year, Joe Biden said he would support a No First Use policy, but thus far has made no steps in that direction.

Although most U.S. policy documents state the purpose of nuclear weapons is to deter adversaries by threatening massive retaliation, Hennessy sees the Trident missile, which has sufficient accuracy to destroy hard targets like missile silos, as a first-strike weapon.

“The whole system is a first strike system,” says Hennessy. “The Pentagon has said that.  That’s how the Pentagon plans.”

When Hennessy and six others entered the Naval Submarine Base at Kings Bay, Georgia, they poured blood, spray painted slogans like, “May love disarm us all” on the sidewalk and strung up “crime scene” tape.

Hennessy taped their indictment to an administrative building believed to be where launch instructions would be issued.  She also left a copy of The Doomsday Machine, a book by Daniel Ellsberg on the nation’s nuclear weapons and its plans to use them.  For that, she was charged with three felonies: conspiracy, depredation of government property, and destruction of naval property.  She was also charged with trespassing, a misdemeanor.  Blocked by a federal judge from introducing evidence that nuclear weapons themselves are illegal, the seven defendants, all Catholic pacifists, were found guilty.

It wasn’t an easy step for Hennessy to take, she said.  She had considered joining earlier Plowshares actions, but in 2018, “it was the time in my faith journey,” she said.

She was ashamed of her government for holding the world hostage with nuclear weapons.  “It felt right” to join a Plowshares action on the 50th anniversary of Dr. King’s assassination, she said.  “As Christians, we are called to protect life, to take care of one another,” Hennessy told me.  “The Holy Spirit facilitates these actions.”

The Plowshares movement began on September 9, 1980, when eight activists entered a General Electric factory where nuclear warhead components were being built.  “With hammers and blood they enacted the biblical prophecies of Isaiah and Micah to ‘beat swords into plowshares’ by hammering on two of the nose cones and pouring blood on documents,” says Art Laffin, a longtime Plowshares activist.

Since the first Plowshares action, according to Laffin, “others, acting in community and some individually, have entered military bases and weapons facilities and have symbolically and actually disarmed components of U.S. first-strike nuclear weapons systems: the MX, Pershing II, Cruise, Minuteman ICBMs, Trident II missiles, Trident submarines, B-52 bombers, P-3 Orion anti-submarine aircraft, the Navstar system, the ELF communication system, the Milstar satellite system, a nuclear capable battleship and the Aegis destroyer.  Combat aircraft used for military intervention such as the F-111 fighter bomber, the F-15A fighter, the F-18 bomber, the A-10 Warthog, the Hawk aircraft, as well as combat helicopters and other conventional weapons, including aircraft missile launchers, bazookas, grenade throwers, and AK-5 automatic rifles, have been disarmed.”  Participants have spent weeks, months, and years in prison.

In a sense, nonviolent action is part of Hennessy’s heritage.  Dorothy Day, co-founder of the Catholic Worker movement, was her grandmother.  While the Catholic Worker may be known mostly for its hospitality houses, Day was no stranger to protest.  She was arrested several times, including for picketing the White House in support of women’s suffrage in 1917, refusing to join civil defense drills in the 1950s, and picketing with the United Farm Workers Union in 1973.  Hennessy represented the family in 2002 when Day was inducted into the National Women’s Hall of Fame in Seneca Falls.  Her three-minute speech focused on opposition to plans for a war with Iraq.

Some things have changed since 2018.  For one, the possession of nuclear weapons is now illegal following the entry into force of the Treaty on the Prohibition of Nuclear Weapons last January 22.  With active and vocal support from Pope Francis, the Holy See was among the first United Nations members to sign and ratify it.  The nuclear powers, none of which have ratified the treaty, are all now in violation of its terms.

For another change, Donald Trump, who disdained arms control and ordered the development of nuclear weapons designed for battlefield use, has been replaced by Joe Biden, a veteran arms controller.  But while Biden extended the last major nuclear arms control treaty with Russia, his budget continues plans for a new generation of nuclear weapons based on land, air, and sea.  A major component of the nuclear build-up, euphemistically called “modernization,” is replacement of the Ohio-class submarines with a new fleet of Trident subs called the “Columbia class.”

Biden is the second Catholic president, she observed, but “Biden’s not a JFK.”  To Hennessy, Biden is “part of the machine.”

Like other pacifists who have become tangled in the criminal legal system going back at least to the early Quakers, Hennessy has a lot to say about the prison system as well as nuclear threats.  The facility where she lived in Manchester was taking in $100,000 a month in fees from the Federal Bureau of Prisons, an agency with a budget in excess of $7 billion a year.  “It’s a form of human trafficking,” says Hennessy, with “money to be made on these bodies.”

The agency’s board includes a high-level official of Raytheon, the nation’s second largest military contractor.  The way Hennessy views it, ““It’s all interconnected, the military industry, the prison industry, it’s all part of the same machine.”

Released from custody, Hennessy says she’s looking forward to being back with family and resuming her volunteer activities with Catholic Worker.  She expects to participate over Zoom in commemorations of the atomic bombings of Hiroshima and Nagasaki, August 6 and 9 respectively.

I asked Hennessy how actions like those of the Plowshares actually lead to the elimination of omnicidal weapons.

“The Plowshares movement simply tries to raise a voice, however small that voice is, and however much it’s ignored, it’s still there,” she told me.

“We always have our hope,” says Martha Hennessy. “We always have the hope of actualizing true democracy.  It’s always going to be a struggle.  It’s up to the citizens to open their eyes, to take risks.”