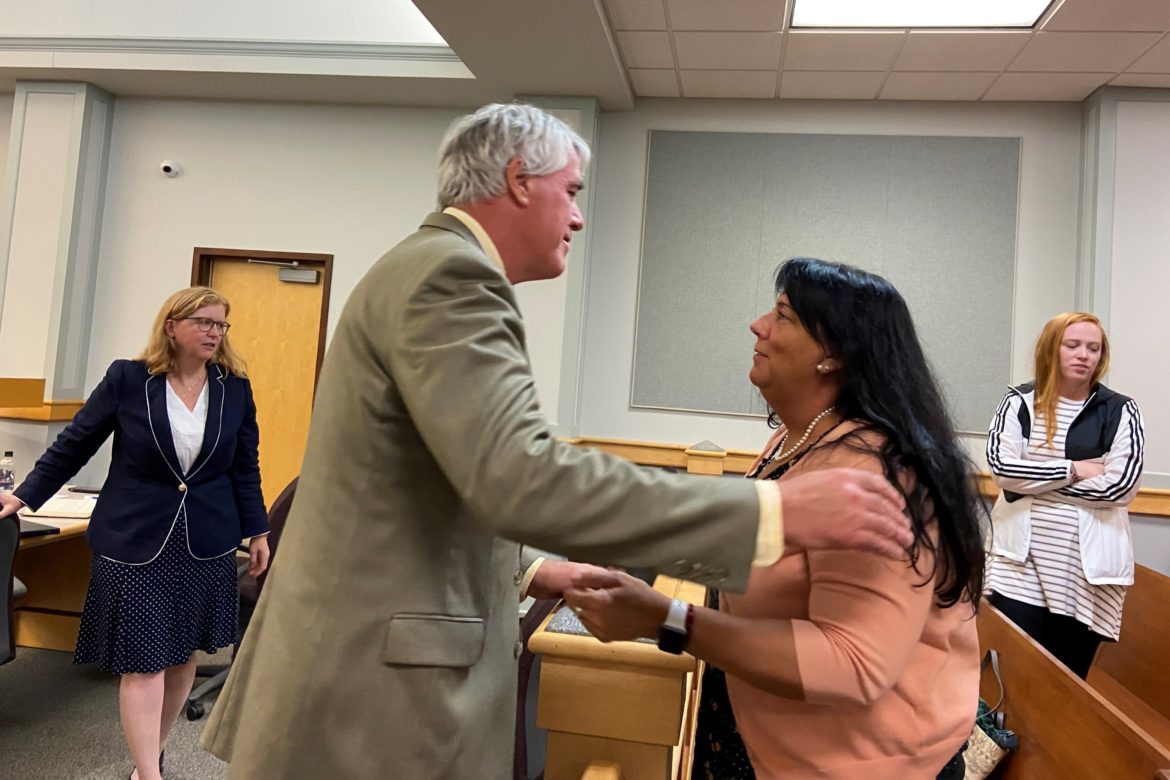 Jeffrey Woodburn is pictured approaching his girlfriend Patty Dwyer in Coos County Superior Court in Lancaster on July 13. His lawyer, Donna Brown is to his left and his daughter, Molly, is on the far right in this file photo.

LANCASTER – Former state Senator Jeffrey Woodburn was sentenced to serve 60 days in jail Tuesday for biting his ex-fiancee’s arm and breaking the door to her home almost three years ago, but it is unlikely he will see the inside of a cell any time soon as he is appealing the convictions to the state Supreme Court.

The maximum sentence Woodburn could have faced was a total of three years in jail on the misdemeanor convictions, but Judge Peter Bornstein suspended all but 60 days at the hearing in Coos County Superior Court. Bornstein suspended 12 months for the conviction involving Woodburn, a Whitefield Democrat, kicking the clothes dryer at the home of his former fiancée, Emily Jacobs.

Woodburn’s attorney Donna Brown had asked the court to suspend all jail time.

Jacobs did not appear in court Tuesday saying in a written statement that she continues to be traumatized from the abuse and has had her privacy violated throughout the process, including being followed around the courthouse by a reporter during the trial. Instead, Jacobs had Lynda Ruel, director of the Attorney General’s Office of the Victim Advocate, read the statement detailing the pain she has endured.

In the statement, Jacobs disagreed with Senior Assistant Attorney General Geoffrey Ward’s recommendation for the 60 days in jail and otherwise suspended sentences, although Bornstein stopped short of Ward’s request that Woodburn be taken directly to jail after the hearing. Bornstein ordered Woodburn to report to jail Aug. 13 unless he files an appeal with the state Supreme Court, which he plans to do.

“So, I ask Your Honor to consider sentencing Jeffrey Robert Woodburn to the maximum allowable under the law,” Ruel said, reading Jacobs’ statement.

“Please send a clear message to him and all those who enabled and supported him after his convictions that those who are convicted of violent offenses against loved ones and their families must be held accountable.”

Bornstein questioned Ward about Jacobs’ disagreement with the state’s sentencing recommendation. Ward said he had discussed the matter with Jacobs.

Woodburn also made a statement before sentencing after the victim statement.

“The truth is:  I did some, not all of things I was accused of and that the narrative was one-sided and that’s why I refuse to consider a plea bargain and resign from the Senate.,” Woodburn said. “And of course, this raised the stakes and the pressure on me … deeper investigation, dangling more charges, costly delays, and greater scrutiny.  Cutting a deal would have solved my legal problems, but buried the truth. An unusual story unfolded.”

Woodburn lost the 2018 election. “After three years — and after losing my senate seat, my paying job, my savings and eventually found work for the chef who hired me 40 years ago as 14-year old kid — I got my day in court.  I knew my admission to some charges would be a hard hurdle to overcome, but that was the only way to be heard.  But I think the jury untangled the truth and put the whole thing in perspective.”

“…I feel shame and remorse for some of the things that happened in the relationship,” he said.

“No matter the outcome here, I will leave this courtroom with my head high. Not because I didn’t make mistakes but that I apologized, took responsibility, and took action. I stood for principle trusting in the ideals of our Judicial system, and I paid a price for that. And while the outcome is not what I had hoped for, I’ve learned from this experience. Through the doors of failure, I have found peace, perspective, love and happiness. I’m richly blessed, deeply changed,” Woodburn told the judge.

Woodburn was a sitting state senator and Jacobs was the chairman of the Coos County Democratic Committee and candidate for county treasurer while they were dating, both with a passion for politics, according to trial testimony.

Jacobs testified at trial that they discussed Woodburn running for governor and how he wanted her to behave if she were to become the first lady.

In his sentencing recommendation, Ward suggested that Woodburn should be jailed immediately after the hearing because of statements he made to InDepthNH.org after the jury returned its verdicts in May suggesting jurors believed him because they found him not guilty on five other charges that stemmed from different incidents, including a separate allegation of biting Jacobs, throwing a cup of water at her face, punching her in the stomach and trespassing.

Bornstein said he wasn’t taking all of Ward’s suggestions into his sentencing decision.

“What I’m not considering in my sentencing determination is what the state called three aggravating factors – the alleged lack of remorse, the alleged contempt of court and the alleged false testimony,” Bornstein said. Ward had brought up Woodburn’s admission before the trial that he had leaked a photo that was under seal.

“What I’m considering in the goals of sentencing and punishing are general deterrence, specific deterrence and rehabilitation,” Bornstein said.

Bornstein mentioned what Ward and Brown both focused on at the hearing as mitigating factors including Woodburn’s lack of criminal record before and after the incidents.

“And what the state describes as his record of meritorious service. Both are mitigating factors and are good things in determining sentencing,” Bornstein said. “What weighs into my calculation is the jury unanimously found him guilty of these three offenses…

“Kicking down an intimate partner’s locked door and biting her on the arm are serious matters that should not be taken lightly or glossed over,” Bornstein said.

Jacobs agreed in her statement.

“Words cannot explain the suffering I endured as a victim of domestic violence. Testifying at trial was the hardest thing I have ever done. It forced me to relive many terrifying incidents of abuse that I did not have to revisit, and I had to see Mr. Woodburn every day in court. There were many times when I was so emotionally and physically exhausted, I was unable to focus on daily task,” Jacobs wrote.

She first addressed the incident in August of 2017 in which Woodburn kicked the dryer door and broke it.

“I took refuge in my room to avoid Mr. Woodburn. I was very scared. Mr. Woodburn became violent. He kicked my dryer door so many times that the hinges came off and the door hit the floor. I remember the fear. I was terrified. Ever since that day I have painful flashbacks when I do my laundry,” Jacobs wrote.

And about the time Woodburn bit her hand:

“The bite caused some of the most intense pain I have ever endured. I struggled to grip objects and lost a significant amount of strength. My hand was so badly bruised,” Jacobs wrote.

Jacobs said Woodburn made false allegations about her.

“Mr. Woodburn’s retaliation caused people in my hometown and our North Country community to question me. Mr. Woodburn put my family and myself in a very vulnerable position,” Jacobs wrote.

At the beginning of the hearing Tuesday, Attorney Brown asked the judge to address comments his wife Linda Upham Bornstein made on the Berlin Daily News Facebook page during the trial about victims’ rights in a thread about complaints mentioned in an InDepthNH.org article that the press was required to sit in an adjacent room while the trial was going on and had difficulty hearing the streamed audio at times.

“It is an abuse trial and the victim has a right to privacy no matter what the “public” feels. Your rights do not trump the victim’s rights. The article is misleading because the press was not denied access but asked to watch it live stream to make accommodations for the jury, lawyers, plaintiff/defendant. Review the NH Court Covid guidelines before passing judgement. Even without covid the victim is entitled to privacy,” Linda Upham Bornstein’s post said.

Brown said she had just heard about the post the day before and wanted to bring it to the judge’s attention. Bornstein said he doesn’t have a Facebook page and isn’t sure how it works.

Attorney Ward told the judge that his wife has her First Amendment right to her opinions.

After the hearing, Brown said she will base the Supreme Court appeal on motions that continue to be sealed that reflect on Jacobs’ credibility that she wasn’t allowed to bring into evidence. And on the fact that the judge wouldn’t allow Woodburn a self-defense claim.

“As you know there are several motions that we litigated that are under seal and I can’t talk about them, but they were motions that were denied and evidence that we wanted to introduce regarding Emily’s credibility,” Brown said.

In her 30-year career, Brown said she didn’t know of another case in which a defendant with no prior criminal record and who was of good behavior after domestic violence, faced jail time on misdemeanor charges.

After the hearing, Woodburn said: “This excessive, unprecedented sentence confirms what I’ve been fighting for the last three years. That process should rigorously, righteously pursue the truth, not people.  I will appeal the conviction mostly to reveal the truth and evidence that was sealed from the public.

“I admitted mistakes, apologized and took responsibility, but not at the cost of truth or fairness. Every frustrating and agonizing twist has opened an unexpected door of insight, wisdom and perspective. And no doubt, if that includes jail time, it will as well,” Woodburn said.