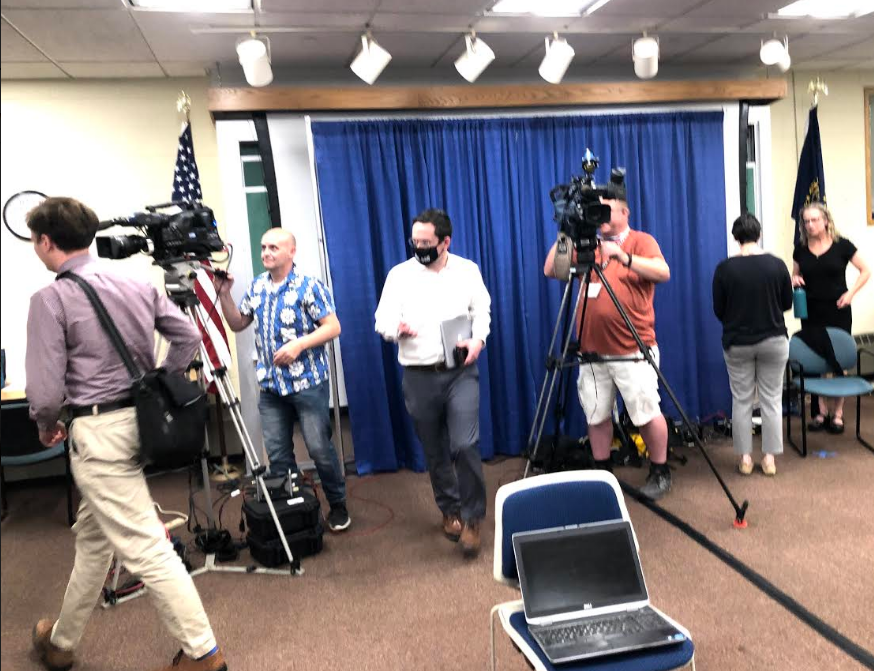 Members of the press attended the last regularly scheduled COVID-19 press conference in Concord on Thursday.

CONCORD – Gov. Chris Sununu held his last regularly scheduled press briefing related to the coronavirus pandemic on Thursday, noting that while the state has crossed the finish line on the crisis, the concerns for COVID-19 remain.

It was the 111th press conference held related to the pandemic and it came 458 days after his declaring a state of emergency on March 16.

In that time, 1,366 residents, mostly elderly people have died from COVID-19. More than one hundred thousand children’s schooling was disrupted, businesses were closed and have reopened with help and almost 100,000 of the state’s 1.4 million citizens – 99,226 have tested positive for COVID-19.

Over the course of those months, Sununu used the metaphor of it being in a marathon.
Have we crossed the finished line? he was asked.

“On the crisis, yes,” Sununu said, “but it does not mean we just ignore COVID.”

He said the biggest regret he had was that he relied on the federal government until the state had its team fix things. One example of that was their rollout of the vaccines and the difficulties people had scheduling a second shot in a timely manner until the state stood up its own VINI registration site.

“I don’t think we have had a big failure,” he said and by comparison, the state has weathered the ravages of the pandemic better than others, he said.

Now, more than half of all residents are fully vaccinated.

His greatest pride, he said was in the team that came together at the state.

The governor said he learned that when times are good, that is when you work the hardest to get your team, infrastructures, and financials done right “so that when the crisis hits you can rely on that team….so yeah, the biggest lesson is work hard in the easiest of times to get your infrastructure right…so hopefully you won’t miss a beat.”

ABORTION RESTRICTIONS
The governor said he is pro-choice but is against abortions later in pregnancy. Sununu maintained he would not veto the $13 billion biennial budget package over a provision of the abortion ban language that would mandate ultrasounds for all women seeking abortion care, at any stage of pregnancy.

The ban has stirred controversy.

“That would be irresponsible,” he said, noting the core provisions are in other states’ laws.

MAIN STREET RELIEF FUNDS CLAWBACKS
On June 24, the state will be standing up a means for businesses to be able to calculate and keep federal CARES Act funds through the clawback from the federal government for businesses that did not realize losses but received COVID-19 relief funds.

He said that with the GOFERR Program within his office and the state Department of Revenue Administration will be reaching out to all the businesses that received funds and is hoping to find ways to allow them to keep the money.

The plan, approved by the feds, will allow any business with less than $10,000 in relief funds to keep it without having to itemize.

Businesses will self-attest for recoupment under $20,000 and those who received over $20,000 without experiencing a loss will still be able to retain some of those funds with some documentation.

Rents, reopening costs, air filtration and PPE purchases, installation of physical safety measures, and crating of outdoor space are a few itemizations that can be calculated to reduce the return of money to the federal government.

RELIEF TO COMMUNITIES, HOTELS, AND PERFORMING ARTS VENUES
Under the new American Rescue Plan, communities across the state will have until Aug. 18 to apply for $112 million which will be doled out over two years in two bundles of about $56 million. Money will also be available through that act to help performing arts venues and hotels which were some of the hardest-hit areas of business during the pandemic, the governor said.

Organizations can apply directly at: goferr.nh.gov/apply.

UNEMPLOYMENT
This Saturday, June 19 federal unemployment benefits end in New Hampshire. The state will continue to offer its own state benefits. In recent weeks, over 10,000 individuals have gotten off unemployment rolls and the state now has an unemployment rate of 2.5 percent, down from a high of about 17 percent during the pandemic.

COVID-19 CASE UPDATE
Dr. Benjamin Chan, the state epidemiologist, said there were 30 new cases of the coronavirus in the state on Thursday, down significantly with the state averaging about 30 to 34 new infections per day a decrease. There are now 265 active cases in the state and the active positivity rate is 1.3 percent, down from last week, Hospitalizations are at 17, down also from last week.

However, there were two new deaths to report for the coronavirus, Chan said, both residents of long-term care facilities.

Chan noted there has been a dramatic drop in community-level transmission over the past few months.
Still, he said the best way to get things back to normal is to get vaccinated and encouraged all age 12 and older to become fully vaccinated.

There are now 13 cases of the Delta variant in the state and there have been a number of breakthrough cases, about 335 of people who had been fully vaccinated but got COVID-19.

LONG-TERM CARE UPDATE
Lori Shibinette, commissioner of the state Health and Human Services Department gave a brief long-term care update, indicating there are no new outbreaks at long-term care facilities to report, and the state and closed one at the Sullivan County nursing home. That leaves only an outbreak at Birch Hill Health Care.

She said the state is vaccinating homebound but will end that at the end of June and there are 53 residents still waiting at home for their shots.

VACCINATION UPDATE
Dr. Beth Daly, who heads up the infectious disease department within HHS said there have been 1,486,000 doses of the vaccine administered in the state to date, including 821,000 receiving their first dose and more than 718,000 fully vaccinated. Over half the state is fully vaccinated she said.

At this point, supply is exceeding demand for vaccines with 450 locations having access, she said, including some outpatient provider offices.

Providers can get access to the vaccines by going to the state’s COVID-19 website, she said.
Quarantine is an effective strategy to contain a virus, she said, noting it places a significant burden. But now that the vaccination rates are so high “we believe it is the right time to reduce quarantine requirements,” and will no longer require it for people exposed outside their home. She also said there was no more contact tracing in community settings through the state will research any suspected outbreaks of three or more cases.

The state will require those in the household to quarantine for COVID-19.

MASK USE
Chan said the updated guidance online for face mask use, from four weeks ago, given that risk is decreasing.

Now, he said, the state is recommending that asymptotic persons can choose to go without face masks in most indoor and outdoor settings. There are some exceptions, including for those who desire maximum protection, those who are immunocompromised, those in health care and public travel settings.

He said businesses will still be able to make the call on whether masks are required inside.

EMERGENCY POWERS
The governor said the chief executive officer will always need to be able to make split-second decisions but there is reason to get legislative input on how dollars can be allocated.

A discussion on limiting gubernatorial powers was being discussed at the statehouse during the press conference and the governor said he would wait to see what was voted on.

He said, however, some relief efforts can wait for legislative oversight.

But if he had to get legislative approval for things like buying testing materials and it might take weeks to go through a process “that would be dangerous for our citizens. I can’t see signing off on such a bill, the governor said.

CHANGING STATE PRIMARY DATE
Legislation may wind to the governor’s desk to move the state primary from September to August. The governor said he would likely veto that.

He said moving it four weeks ahead does not achieve the goal of trying to integrate more voters with candidates.

“I don’t see the benefit. I think it creates confusion in our system we have a great system,” he said.

DIVISIVE CONCEPTS
House Bill 544 which would prohibit public school history and social studies teachers from discussing certain matters of race, gender, and ethnicity didn’t get out of the Senate but there is language in the budget.

The so-called Bradley amendment does a good job of crafting a compromise, Sununu said.
He said the bills across the states may not be sustainable in court, and he said Senator Jeb Bradley’s amendment gets away from that.

He said there will likely be training from the Department of Education to help teachers and there will be an opt-out provision with local control.