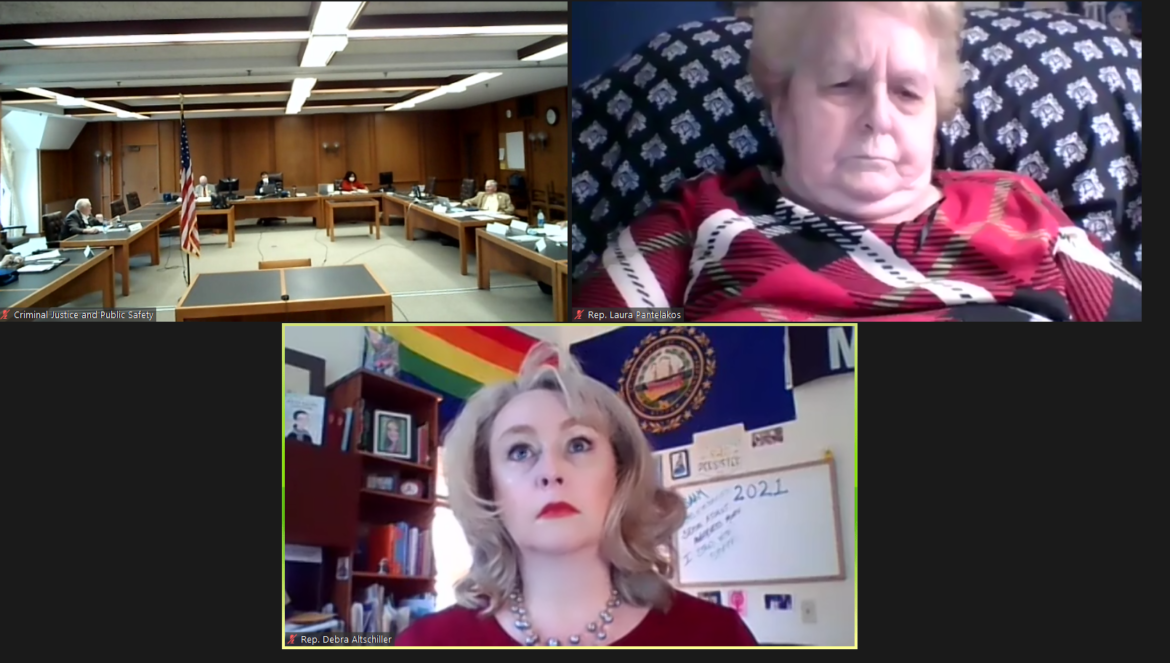 The House Criminal Justice and Public Safety Committee met Wednesday with some members in the Legislative Office Building and others attending remotely. This photo shows the hearing room and Rep. Laura Pantelakos, D-Portsmouth, at right, and Rep. Debra Altschiller, D-Stratham below.

A House committee voted in favor of a bill that Republicans tout as prohibiting the state from enforcing any Presidential executive order that would restrict people’s gun rights, while Democrats call it an unconstitutional threat to public safety that could cost the state federal funds.

The vote on Senate Bill 154, which has passed the Senate, before the House Criminal Justice and Public Safety Committee Wednesday was 11 to 10 along party lines.

Rep. David Meuse, D-Portsmouth, said he opposed an amendment and the bill itself, warning committee members that “ghost guns” are an increasing problem.

“They are untraceable and really put law enforcement over a barrel… These are guns that empower people that we don’t necessarily want to empower in society like militias and white supremacy groups,” Meuse said.

“Anybody who wants to buy a gun legally can buy a gun in New Hampshire. It’s not an issue,” Meuse said.

House Majority Leader Jason Osborne, R-Auburn, said after the vote: “After much discussion in Washington over the last few months about Executive Orders that would severely restrict our Second Amendments rights, it is abundantly clear that something has to be done. These potential Executive Orders, or any laws enacted by Congress, would impede New Hampshire citizens’ basic rights to defend themselves.”

“(I)t would simply say that New Hampshire rejects Washington edicts and we will not be enforcing them,” Osborne said.

Rep. Debra Altschiller, D-Stratham, said: “The New Hampshire Republicans are neither clever nor original in their efforts to nullify efforts the federal government is finally making to curb the bloodshed of gun violence in our country.”

“If SB 154 passes, we cannot get help from the FBI if a mass shooting happens here. The rise of armed white supremacy groups, anti-government extremists in New Hampshire and the virtual free-for-all the gun lobby is having in the Republican-run legislature is alarming and a real threat to our safety,” Altschiller said.

Rep. Daryl Abbas, R-Salem, chairman of the committee, said New Hampshire should not be required to enforce federal laws and executive orders from the President of the United States “that restrict the rights to bear arms that are inconsistent with New Hampshire’s laws and traditions.

“If these out-of-state federal politicians enact policies infringing on our second amendment rights here in New Hampshire, that is their agenda and they should take responsibility for enforcing their agendas especially when the people of New Hampshire have historically rejected these types of infringements,” Abbas said.

The ranking Democrat on the committee, Rep. Linda Harriott-Gathright, D-Nashua, released the following statement after the hearing:

“SB 154 solves no existing problem in this state, but sadly has serious consequences for the people of New Hampshire.

“Banning New Hampshire law enforcement and judges from helping to stop the sale and creation of illegal weapons, crack down on firearm trafficking or enact programs to reduce gun violence in our streets is not only alarming but likely unconstitutional. Even more concerning is that this bill would prohibit state and federal officials from working together in the wake of a tragedy from gun violence should one occur here in New Hampshire,” Harriott-Gathright said.

She said similar pieces of legislation in other states like Arkansas have been vetoed due to their unconstitutionality.

“Efforts by the Biden Administration or any subsequent Presidential administration elected by the American people to reduce deadly gun violence should not be blocked here in New Hampshire,” Harriott-Gathright said.