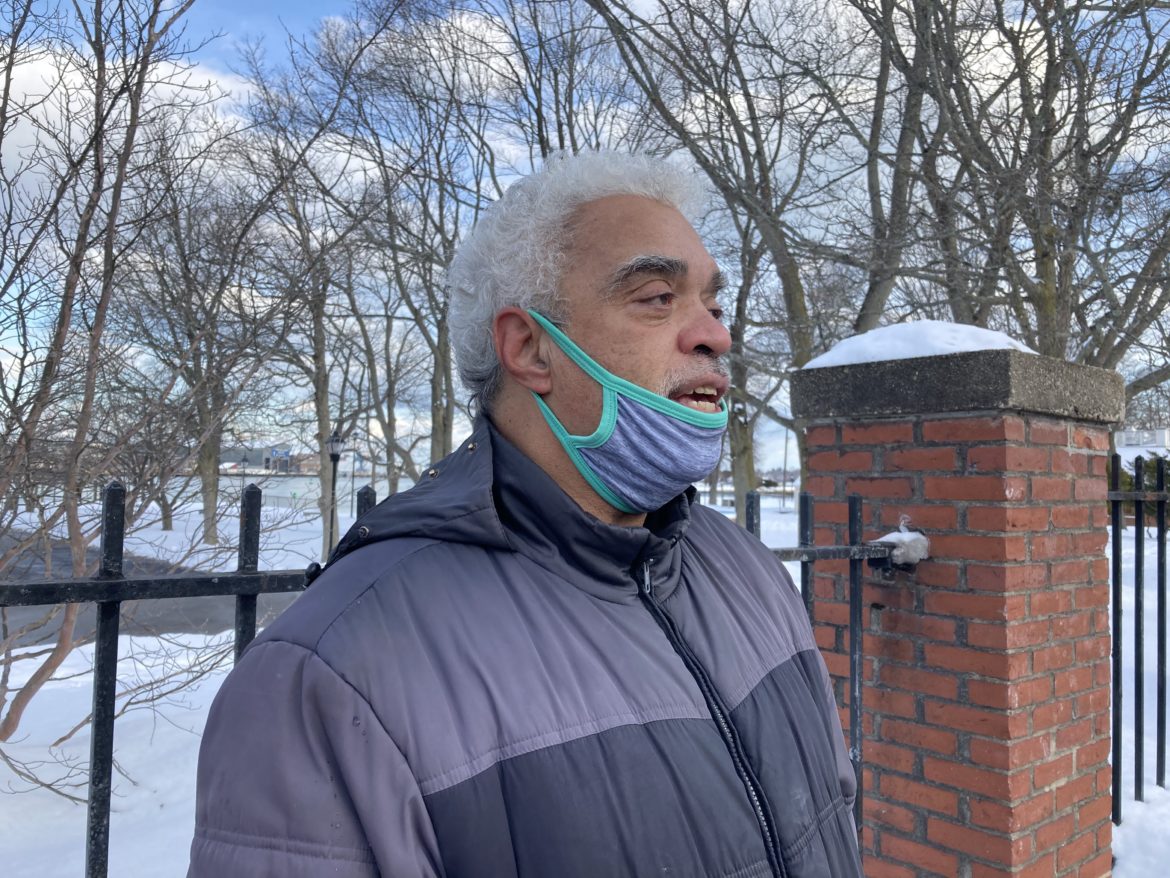 Dense snow all around. Fierce wind.  We’re at Prescott Park at that corner of Marcy St. and lower State St. by the Memorial Bridge.

I’d asked Kevin Wade Mitchell to sing one of the songs he told me about. One he’d sung as a kid when his teacher, Miss Tracey, in Portsmouth’s old Wentworth School, called on him, the entertainer at aged 9, to sing at the end of class.  “Well,” he says. “Can’t remember all the lines.  Got a Sam Cooke.”

He pulls his mask partially down. Lifts his chin. People are passing even in the bitter cold. Mitchell had been speaking in a soft steady rhythm in this interview we’d done outside walking.  But then his resonant voice breaks out.

“I was born by the river in a little tent.

Oh, and just like the river, I’ve been runnin’ ever since.

It’s been a long, a long time comin’ but I know I know a change gonna come.

“And that was unrehearsed,” he says.  And we stand shivering because it takes a while to let the song go. Mitchell is a local actor who’s been doing local theatre gigs for years after studying acting at the Elma Lewis School of Performing Arts founded in Roxbury, Massachusetts, and was for a while in Dorchester where Mitchell studied.

He’s played Martin Luther King Jr. in “All the Way” at the Player’s Ring. After he saw “Eyes on the Prize” as a young man, he worked for years to learn Kings movements and speech.

He’s played Big Julie in “Guys and Dolls” at Prescott Park Arts Festival and Bono in “Fences “at the Firehouse Center for the Arts. Mitchell told me about his acting life during the pandemic, and in the telling he’s also telling his own history of Portsmouth in the 1970s.

“Got a few things during the pandemic,” he says.  He’s played Bill in Seacoast Repertory Theatre’s “The Bus Stop,” a play by Najee Brown about four women taking a bus together to a prison, each going to visit a man who’s incarcerated. He’s appeared as Frederick Douglass at Strawbery Banke Museum and NHPTV.

He was all set to play Shepard in a Player’s Ring production of “Ben Butler” but it was cancelled because the production company couldn’t get the rights.

It’s been tough during the sheltering. He doesn’t have a computer which has slowed things down more.  But he’s working on “trying to keep my name out there.”

One gig continues  – but not for Mitchell on a day as bitter cold as the one in which we do our interview. “I do a lot of characters in history,” he says.  One of them is a gig as a dramatic role player.

Valerie Cunningham is responsible for this.  Cunningham is founder of the Black Heritage Trail and co-author of Black Portsmouth; Three Centuries of African American Heritage.  Cunningham and Mitchell’s mother were school mates, living in Portsmouth’s South End attending the Haven School (now condos) together.

Cunningham had seen several of Mitchell’s performances, notably “A Thirst for Freedom,” a play about the 1796 escape of Ona Judge who was enslaved to Martha Washington and fled to Portsmouth, New Hampshire.  In the play Mitchell had the role of Jack Staines, a free Black sailor who became Ona Judge’s husband.

Cunningham recruited Mitchell to be a scholar and Sankofa Tour guide in Portsmouth.  He was offered the role of Jack Staines.  Cunningham gave him her book, Black Portsmouth, and other documents about Staines.  Mitchell developed a script for the current tour today in which he performs as Jack Staines and tells the history of Jack’s seafaring life and his marriage to Ona.   “He was just a natural,” Cunningham said.

Like Cunningham, Mitchell grew up in Portsmouth.  He mentioned three books that shaped him growing up.  Cunningham’s aunt gave Mitchell a biography of Jack Johnson, the first African American world heavyweight boxing champion. In the library of the Wentworth School, his school in the early 1970s, he found a copy of The Negro in American History. “That’s when I got an inkling of our history.”  The third was Shakespeare’s Othello. He’d always wanted to play Othello.

“I got another story,” he said, there on the street corner. “A time I sang for my supper.” It was at the Woodbury Avenue Grocery where they made pizzas. The clerk said to him, “If you come and sing for me, I’ll make you any kind of pizza. One night I was a little short on food so I went and sang for her. I sang ‘Maybe Tomorrow’ by the Jackson 5.”

Mitchell didn’t know there were enslaved people in Portsmouth until he played Jack Staines in “A Thirst for Freedom.”  He likes doing the dramatic role playing for Sankofa Tours because he can help people see that “this history has been hidden up here.  They want to keep the slavery down south. But slavery was prevalent here.  A lot of people got rich off shipping because they catered to the slave ships.  The Langdons freed their slaves but they had them.  The Whipples have a history of being slave owners. I’m not surprised that people don’t know about it. But they need to know about it.”

“Frederick Douglass is Kevin’s favorite,” Cunningham said.  Mitchell has done an annual reading at a 4th of July event sponsored by Strawbery Banke and the Black Heritage Trail of New Hampshire in which he presents Douglass’ speech, “What, to the American slave, is your Fourth of July?”

After visiting Frederick Douglass’s home, now a National Historic Site in Washington, D.C., Mitchell began writing a play about Douglass. One of Mitchell’s dreams is to take his Frederick Douglass play to the city’s new school that replaced his old Wentworth School in the Acres.

He’d like to give the students that story, in hopes it would give them an inkling of Black history the way historical stories did for him when he was a boy.