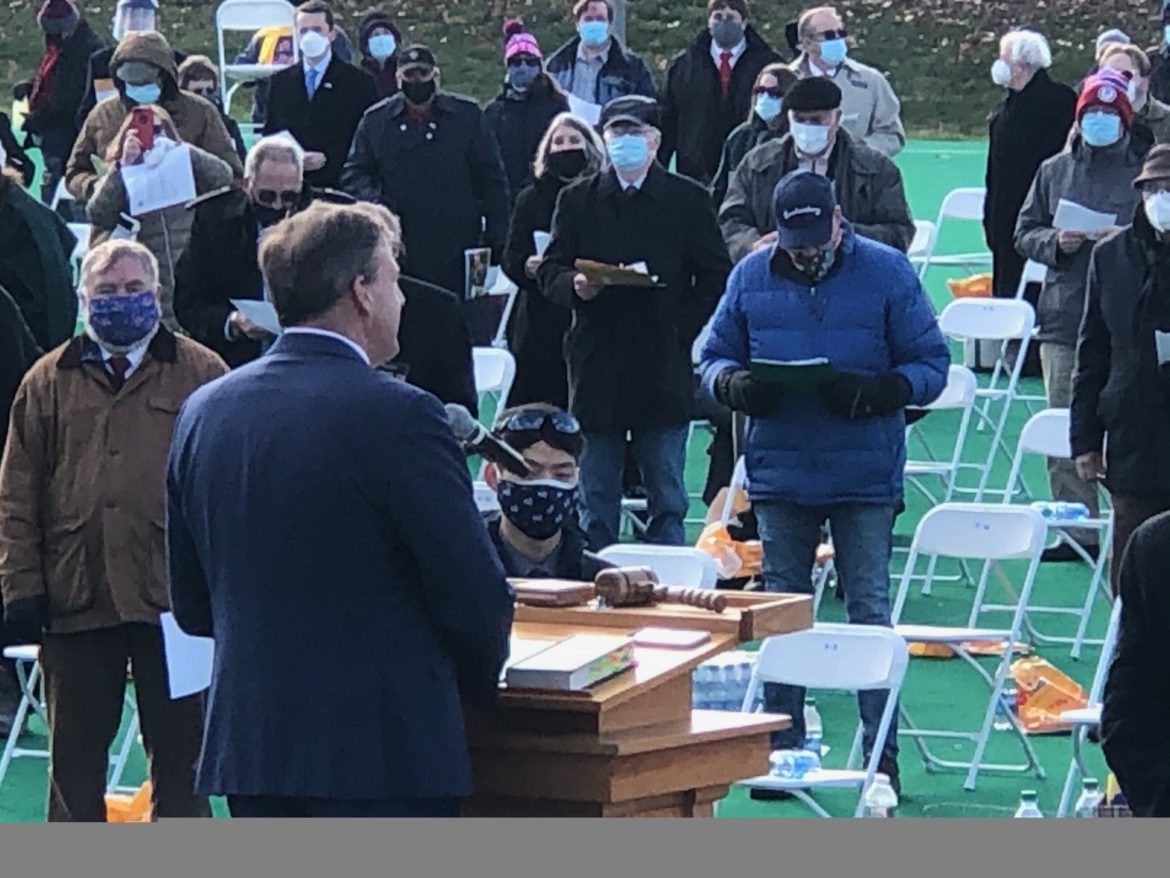 CONCORD – Gov. Chris Sununu provided an update on the rollout of the first COVID-19 vaccines that arrived Monday, on how he is directing the last of the unspent CARES Act relief money, and he took questions from the media at his weekly pandemic briefing on Thursday.

It came as the state reported four new deaths, and 872 new daily cases along with 284 current hospitalizations from the virus, according to Dr. Beth Daly, chief of the Bureau of Infectious Disease Control.

Currently, there are 6,928 active cases of COVID-19 in the state. About 8,000 people are tested each day with about 9 percent testing positive, Daly said.

How Many Legislators Test Positive

Sununu was asked how many individuals connected with the State House have tested positive for COVID-19 in the wake of House Speaker Dick Hinch’s death to the virus last week, Speaker Pro Tem Kimberly Rice contracting the virus, reports of staff and legislators testing positive, some from events and some from being in contact at the State House.

Sununu said that number is not public information.

“I don’t get a running tally,” Sununu said, “I know a couple of staffers because I know them personally,” but he said he had no tally and it is private information.

Some legislators are concerned that the State House may be the location of a super-spreader because some GOP lawmakers do not wear masks, the governor was told, but he insisted that events, not locations are super-spreaders.

About 80 GOP House members didn’t wear a face mask Dec. 2 on Organization Day and four reportedly tested positive after a GOP caucus gathering in Manchester Nov. 20, but the state has refused to provide a total number of positive-testing legislators.

Sununu stressed, as he did last week, however, that public officials need to make provisions to keep people healthy and that includes offering remote access to in-person events, requiring the wearing of masks as is part of the state mask mandate and that meeting locations adhere to social distancing guidelines.

It will take a few months for all residents to get a vaccine but the rollout has begun, although there will not be as many vaccines as initially hoped for, Sununu conceded.

As of Thursday, however, 3,155 doses of the vaccine have been administered and among those, 901 have gone to front-line health-care workers.

“It’s a safe vaccine,” Sununu said, “and we are on a positive path here.”

He congratulated the state’s Public Health staff for keeping up the speed and schedule for vaccinations in spite of a Nor’easter that dropped a foot or more of snow Thursday.

Daly said those who are caring directly for patients of COVID-19 are the first to receive the vaccine. It is up to the hospitals themselves to review who to vaccinate first, with some suggestions coming from the state. For example, she said, the emergency departments often see the cases first.

All of Phase one individuals considered of the highest priority – 100,000 in all – should have their second shot by the end of January, Sununu said.

Both the Pfizer and the Moderna vaccines will require a primary shot and a booster within several weeks. Next week, long-term care facilities are preparing to distribute the vaccine to its residents and staff.

Shibinette said the pharmacy partners who have contracted to administer the vaccines in these settings have three weeks to vaccinate. Many facilities have been scheduled, she said.

“We are very confident they will be able to fulfill their contract,” Shibinette said, but there is a plan B, and the state will pick up the ball and run with it to ensure timely vaccinations.

Some states are announcing who is receiving vaccines in advance but the state is not doing that. However, Sununu said that many hospitals are sharing that information, and “we are going to be as transparent as we possibly can.”

To find out who is in line for the vaccine first under Phase 1a guidance, visit the NH COVID-19 Vaccination Plan website here https://www.dhhs.nh.gov/dphs/cdcs/covid19/documents/phase-1a-technical-assistance.pdf

Hospitals, nonprofits, and the University of New Hampshire will get what funds remain in lapsed accounts under the $1.25 billion the state received in federal CARES Act relief funds. It appears there is about $23 million in the till.

Sununu said the state has to spend all that money by Dec. 31 and he expects it to be spent down to the penny with no money returned to Washington. He said about $4 million will go to UNH, which has helped the state with COVID-19 testing, particularly now that the students have left the campuses.

An additional $7 million will go to hospitals, which have been among the hardest hit. They had to cancel elective procedures and that has impacted their bottom line. Sununu said that will be combined with an additional $70 million that the state is also receiving from the federal government this week to help hospitals.

The final allocation will go to nonprofits, some toward unemployment insurance. This will account for $12 million and will include some hospitals that are nonprofits.

Sununu said he was on a call with all the nation’s governors and President-Elect Joe Biden Wednesday and remains fairly confident that there will be a new wave of federal help.

He said it might come to the Lame Duck Congress this week, but if not there would be a lot of pressure to do so soon.

“I think we are all very hopeful Congress can get something done,” Sununu said, but he is “not holding my breath.”

One thing that is part of the current plan that may be passed in the next 48 hours is help for cities and towns.

Sununu said if Congress does nothing, New Hampshire will still “be OK. Our economy is very strong we have general funds we can tap into,” and there is adequate PPE and testing capability.

Veterans Home
The Veterans Home has lost 35 residents to COVID-19 but some who have survived are showing their appreciation to staff. One recently wrote on Facebook to thank the staff for their dedication to helping him recover.

Leslie Greenleaf, a disabled veteran who was exposed to Agent Orange while deployed in Thailand, thanked the staff for putting him on the road to recovery after contracting COVID-19 at the home.

“It took a lot of care and time to pull me through,” Greenleaf said, noting he is hoping to soon return to his room. Although it will take a lot of time and work to return him to the full stamina he had before COVID-19, he said his progress is “all due to the dedication of the entire staff.”

Storm
As a massive snowstorm that buried most of the state with a foot or more of snow was winding down late Thursday,  the governor asked people to give the more than 700 pieces of state Department of Transportation machinery on the roads a chance to clean up before heading out.

“We want to make sure we give those plows a little while longer,” Sununu said, adding there were a few power outages associated with the storm.

The good news, however, is that it looks like it will be a white Christmas in New Hampshire, Sununu said.