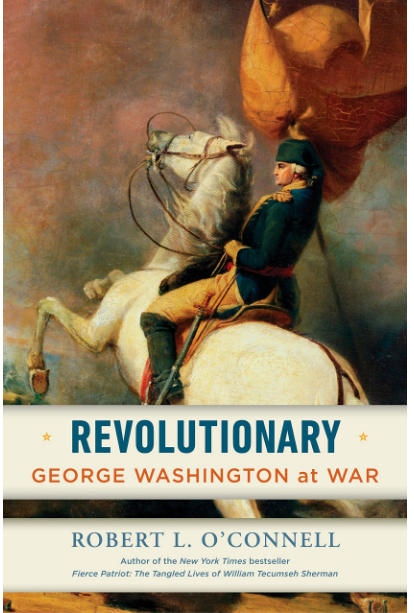 I have had the pleasure of reading Revolutionary, George Washington at War  and want to recommend it to anyone with an interest in our Founding Fathers and how we became a nation called the United States of America.

I couldn’t put it down.  It details who George Washiongton was, how he felt about different things such as life, death and war.  Robert L. O’Connell uses a footnote technique in every chapter to let you know where he got his information.  How to make a revolution work?  There were no soldiers and no guns for anyone who wanted to make the British Government and King George III take notice of one of their colonies whose only job was to supply services, goods and tax money to the King of England.  It is an exciting, detailed look at how it all happened.

Washington was bent on military service from an early age but was stymied by the fact that the British did not like colonials to have high rank in their military.   The following was written by the author and I think is noteworthy regarding what happened in France during their revolution.  “Washington reacted with horror as excess piled upon bloody excess until he came to see the French Revolution as almost a visitation of hell, destined for tyranny and warfare, the exact opposite of what he wanted for America.  Unfortunately, it was that version of revolution, not his own, that would mostly leave its bloody footprints smeared across the next two centuries.  But that wasn’t his fault.  He remains, across all that time, a standard of how to bring about revolutionary change without killing too many people in the process.  It’s hard to say that’s not his proudest legacy.”

After the Bastille had been stormed, Washington admonished Lafayette that “the tumultuous populace of large cities is ever to be dreaded (for their) indiscriminate violence” and warned of the possibility of their being employed by “wicked and designing men…who will not hesitate in destroying public tranquility to gain a favorite point.”

My goodness.  Where are we in this description?  This book is worth a read.  It is so interesting and a trip back in time.