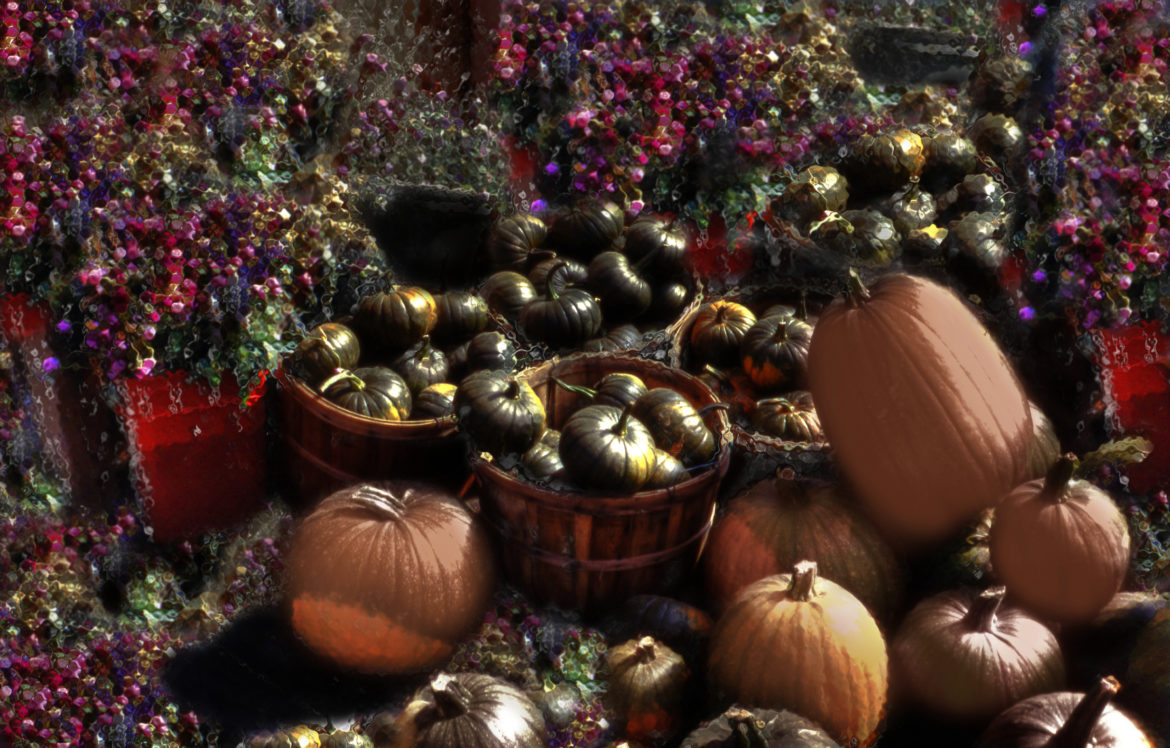 From a forthcoming book: “The Anamake Chronicles: Stories that need Telling” by Alice and Wayne King

By Loba – AKA Alice Vartanian King

This Halloween, I’m going out trick or treating.  Every year since we moved into our new house, my husband took our son and his friends out to trick or treat–or as I call it:  They went “weening.”  I stayed at home eating through the entire basket of peanut butter cups by myself, but no one ever came to our new house on Halloween.

This year, just in case someone does show up after we suit up and hit the treat trail, I‘ll leave a sign on our door that says:  “Went Weening; please help yourself.”  It’ll be self-serve peanut butter cups for any kid who’s gutsy enough to brave the incline of our driveway just for a candy bar.  I refuse to shut the lights out to ward off any potential weeners, like some folks do.

Oh you know the type.  There’s at least one house in every neighborhood that’s pitch black on Halloween.  The place looks dead and it’s not an added decorating effect for the occasion.  364 nights a year, whenever you pass by the house, you can see two people through a big picture window, sitting on the couch in their living room, watching television.

But on October 31st, all their lights are out and there’s a huge blind pulled down in the living room–probably a custom made “window treatment” purchased solely for this annual event.  They finish dinner by 4:30, the television is turned off, maybe they even disconnect the phone…BUT THEY’RE IN THERE…

All the kids in town know they’re inside the house.  They’re hiding somewhere just so they won’t have to deal with the weeners who come to their door.  I’m glad these people have to give up watching TV one night a year, but somehow the punishment doesn’t fit their crime.

Where I grew up, by the time you’re a teenager you’ve got a comprehensive, town-wide list of all these obstructionists.  So the night before Halloween, you and your friends “egg” their houses and “paper” their shrubs–a far more appropriate sanction than losing TV privileges for a night.

Before our son was born, we lived in an old farmhouse on the Town Common, and hundreds of weeners would come trick or treating there.  In fact, the first year, we ran out of candy.  It was a good thing we had a litter of 8-week old kittens–all weaned as it were–and anxious to travel.

Those kittens sure pulled my pumpkin out of the patch that year.  Nevertheless, my choice for auxiliary treats didn’t exactly endear me to a few of the parents in town.  (Gosh, they were only kittens…)  But, our new house is a wasteland on Halloween.   No, not because of the kitty incident, but because of where it’s located.  I just wish that it hadn’t taken me five years and 50 billion grams of extra fat to figure this out.

This information is crucial to homeowners and it would be simple to quantify the correct rating for each listing.  Why should you spend your first Halloween, in a new neighborhood, without knowing in advance if it’s a 5-bar house or a 16-bag mini-treat mecca for the entire county?  Besides, who knows what the previous owners were like.  Maybe they gave out regular-size big bars, not mini’s–and word gets around, you know.  You’ve got to be prepared to fill all those little weeners’ great expectations, not just their bags.
As a consummate Halloween hostess, I also think kids should put a little more effort into the trick-half of this reciprocal holiday responsibility.  I always outdid myself and I didn’t even reach the zenith of ween subterfuge until I was nearly 35 years old.  That was the year when my friend Stephanie was having an affair with–you guessed it–a married man.

She was 28 years old and her idea of a totally committed relationship was every Tuesday and Thursday night from 6 to 10 p.m.  Since I was older and mature, I thought this sounded more like an aerobics schedule than love…but in either case, one thing was certain:  it was rigorous.  So who was I to tell her that she ought to work out at the health club and leave the emotional gymnastics to some other woman…some older, unhappily married woman, who needed the exercise.  Any other person, but not my friend.

Every time Stephie ran down the current list of reasons why he “…really couldn’t mention the ‘D’ word to his wife just now…”, I would recite them aloud along with her.  Usually, she’d end up crying so hard that I was left to finish her monthly mantra by myself, until I cracked too–not out of empathy for her–but from utter boredom.  The Slug, as I called him, came up with excuses totally devoid of any imagination.  So he was not only never going to get that divorce, but he was also creatively challenged.  Now as far as I’m concerned, the only thing worse than a 48 year-old philandering slug, is a boring 48 year-old philandering slug, with a creative deficit and an obsession for slugettes almost half his age.

So when Stephanie called me at work on Halloween, sobbing over the phone that The Slug had canceled their regular night of total commitment because “his wife had invited a few neighbors over”, I knew immediately what must be done.  It was time for my best friend to join a gym or watch TV two nights a week.  Anything would be an improvement over spending slimetime with The Slug.  I made Stephanie promise to meet me at my apartment after work, then I left my office right away.  I had a lot to do.

We were going trick or treating.

I brought home four yards each of yellow and red felt, two small squares of white, and two pairs of everything else:  white gloves, black tights and black leotards.  By the time Stephie arrived at my place, the outfits for our rendezvous with reality were complete.  A huge, round, red M&M’s Plain and a tall, oblong yellow M&M’s Peanut–each with a white “M” on the front and nothing but two small eye holes cutout at the top.

When it was time to choose costumes, I had to confront my own actuality.  I’m 5 foot five and Stephanie is five-ten.  So on Halloween, as in life, I would be the overstuffed, rotund M&M’s Plain; and she the lanky Peanut.  We practiced the old M&M’s jingle and dance, reconstructed from my childhood memory of those great TV commercials.  Then we sped to The Slug’s house in a borrowed truck–as soon as I could wedge my round plainness behind the wheel…and before Stephanie could reconsider what we were actually about to do.

The Slug didn’t live in a house.  He lived in a mansion with two smiling children, who invited us in when we arrived at the door.  There was a woman inside, who gave us a warm welcome (but she couldn’t have been his wife…where was her witch outfit and broom?)  The nice lady was dressed as Juliet and she was giving out designer treats from Bloomingdales this year–instead of poison apples.

The few neighbors turned out to be more than 40 guests–all decked out in expensive costume rentals.  Peering out from my peepholes, my best guess is that the evening theme was “famous lovers,” so the uninvited M&M couple fit right in nicely.  We sang the jingle and did the dance–while everyone in the room gathered ‘round and tried to guess who we really were.  When they couldn’t, the sea of smiling faces demanded two more encores…

Stephanie was totally out of control by now.  Her eye holes were wet and the yellow felt was beginning to stick to her face, as she alternated between hysterical laughter and unbridled sobs.   She was OK when we did the intro of the jingle:  “Hi, I’m M&M’s plain…And I’m peanut.  We’re both dipped in a pool of delicious milk chocolate, then all covered with a crisp candy shell…”  But she gave new meaning to the dance routine when it came to the part about “melting in your mouth…not in your hands.”  Then she adlibbed a few gestures on her own just to make her point.

It was definitely time to go.

I pulled on Peanut’s arm and the M’s appeared to dance out the door.  Then I pushed her into the truck, while she complained about why we had to leave so soon.  I said, “What, are you crazy?  That party was catered and I forgot to cut out openings for our mouths.  There’s nothing more unbecoming, Stephanie, than eating hors d’oeuvres through your eye hole.  Don’t you know anything about etiquette?”

That week, M&M’s Peanut mailed her designer chocolate treat from Bloomingdales back to The Slug with a note that read:  “How ‘bout next year we do the Three Musketeers so you can bring your wife along?  Trick or Treat…”