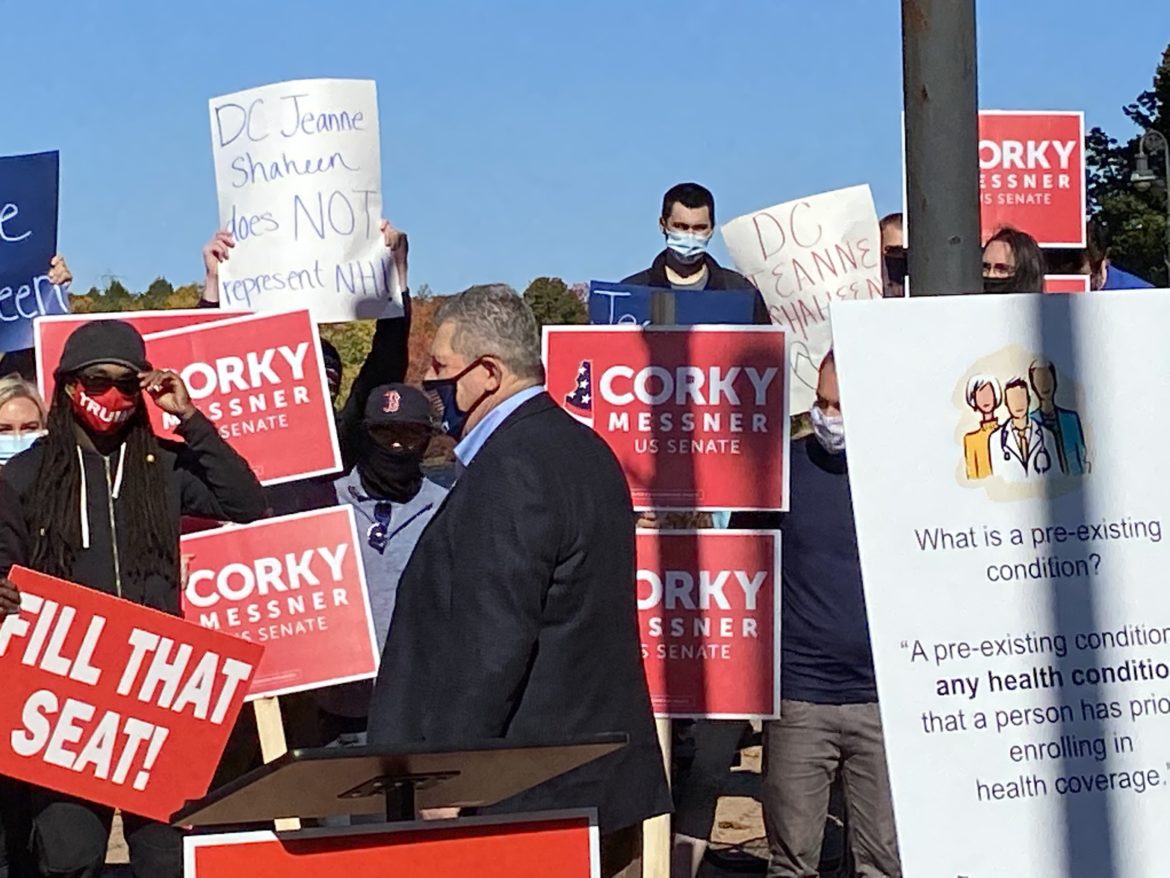 MANCHESTER – The issue of health care took center stage in the U.S. Senate campaign in New Hampshire on Wednesday with Republican challenger Corky Messner taking aim at Democratic incumbent Jeanne Shaheen for her support of the Affordable Care Act.

And Shaheen’s campaign aiming back as they had a press conference at 11 a.m. in Arms Park.

Messner held an in-person event in Arms Park in Manchester at noon to go over his plans to deal with health care needs in the nation. InDepthNH.org did not attend the event in person.

Messner, a successful businessman, lawyer, and resident of Wolfeboro, notes on his campaign website that unlike Shaheen “he does not support socialized medicine” but supports a free-market healthcare system that “has seen our nation lead the world in care…”

“He supports transparency in services which he believes will help drive down costs. Corky supports care for those with pre-existing conditions and permitting young people to remain on their family health insurance plans, but does not think the status quo helps Granite Staters,” referring to the Affordable Care Act or ACA.

According to the Shaheen campaign, Messner tried to shout down and yell over the voices of Granite Staters who either personally have epilepsy, cancer, and tuberous sclerosis or who care for children with such ailments who were at her press event.

They were sharing their health care stories at the event and declaring that “Pre-Existing Conditions Exist.”

The ACA prohibits insurance companies from refusing to insure those with such conditions.

According to a Shaheen campaign press release, “Last week, during the first New Hampshire Senate debate, Messner said that pre-existing conditions are mere ‘health conditions’ and dismissed voters’ concerns about his efforts to repeal the ACA as ‘fear-mongering.’ Rather than apologize today, he and his supporters tried to drown out the stories of Dr. Chelsey Lewis, whose daughter has tuberous sclerosis, Jacqui Silvani, whose son is a cancer survivor, Amy Franklin, who has epilepsy, and state Rep. Pat Long while they called out Messner for threatening the health care of their families and 572,000 Granite Staters with pre-existing conditions.”

“Corky Messner staged a protest against parents whose children have cancer and other serious illnesses today because he can’t justify his support for repealing the Affordable Care Act and kicking them off their health care coverage,” said Shaheen spokesman Josh Marcus-Blank. “Last week Messner denied that Granite Staters have pre-existing conditions at all, and today he shouted down a group of people whose families have cancer and epilepsy…Messner’s willingness to attack families facing serious health care issues is further proof he wouldn’t hesitate to kick them off their care.”

Jacqui Silvani from Newfields came to the event to tell her story.
“In 2015, my youngest son, Joe, was diagnosed with cancer—stage 4 neuroblastoma—right before his third birthday. During his treatment, he developed a life-threatening condition that can result in chronic kidney damage. He had maxed out on what would be our insurance’s lifetime limit,” she said. “The Affordable Care Act is a lifeline for Joe—it ensures that he can’t be denied coverage from insurance companies because of his pediatric cancer and it ensures that he can stay on our insurance until he is 26-years-old. Without the pre-existing conditions protections in the ACA, my son would likely be deemed uninsurable. And now Republicans like Corky Messner are saying that’s not true, all to justify their support for repealing the ACA and its protections for people like my son.”