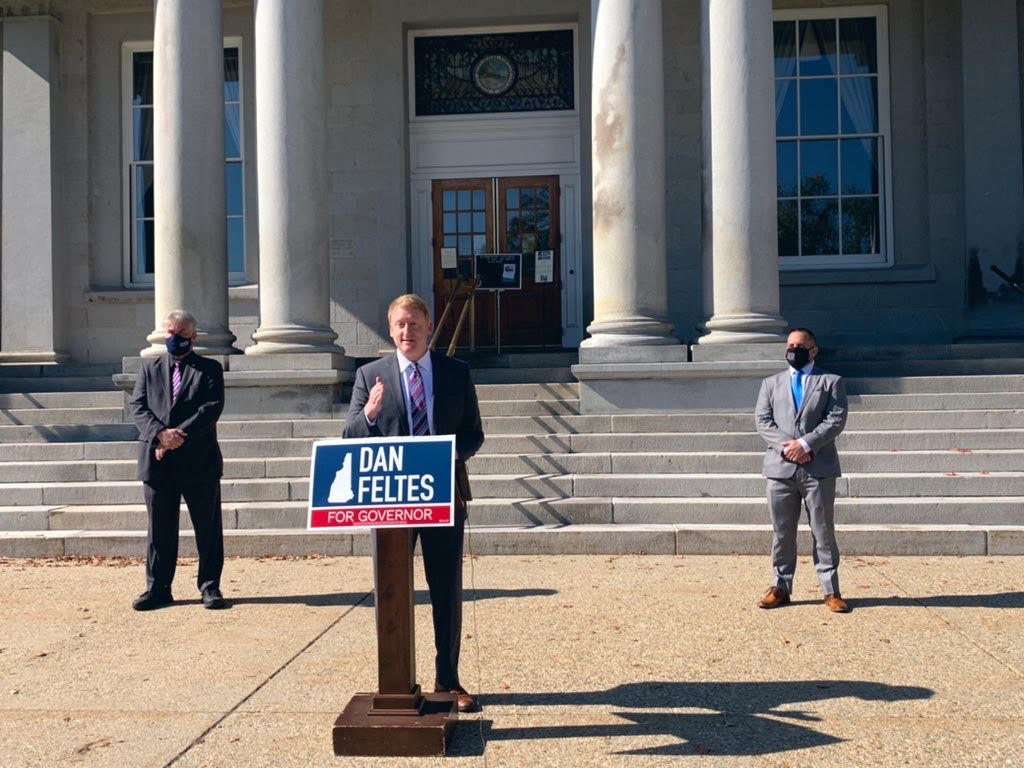 State Senator and gubernatorial candidate Dan Feltes hosted a Monday press conference with labor leaders to announce his plan to reject a pay increase if elected governor until Granite Staters get a raise in the minimum wage.

CONCORD – State Senator and gubernatorial candidate Dan Feltes hosted a Monday press conference with labor leaders to announce his plan to reject a pay increase if elected governor until Granite Staters get a raise in the minimum wage.

Republican Gov. Chris Sununu vetoed a bill to increase the state’s minimum wage from $7.25 while accepting a $31,000 routine pay increase as the state’s chief executive.

Feltes said Sununu has blocked a minimum wage increase for New Hampshire workers – while taking a “massive taxpayer-funded pay raise for himself.”

He noted Larry Kudlow, a senior Trump Administration aide, called raising the minimum wage a “terrible idea,” noting it sounds a lot like Sununu’s response to the bills passed by both House and Senate but failed to sustain the veto for a lack of a two-thirds majority vote.

Ben Vihstadt, spokesman for the Sununu campaign, said under state law, governors do not set their own salary.

“The salary Governor Sununu received on day one was determined by state law,” he said referring to RSA 94:1-a, I(b) “where the labor grade is established and then the salary for the governor’s labor grade is established in RSA 94:1-a, I(a).”
He also referred to the governor’s July 24, 2020 veto message in which Sununu said changing the minimum wage would have many “unintended consequences.”
A copy of the governor’s veto statement is here: https://www.governor.nh.gov/sites/g/files/ehbemt336/files/documents/hb-731-veto-message.pdf

Feltes said raising the $7.25 minimum wage, which is the federal minimum, in the state is a common-sense policy that will help Granite Staters. In fact, more than 100,000 workers in New Hampshire would directly benefit from a $12 minimum wage.

While the cost of living has increased by 18 percent over the past decade, he said the state holds on to the same $7.25 minimum wage.