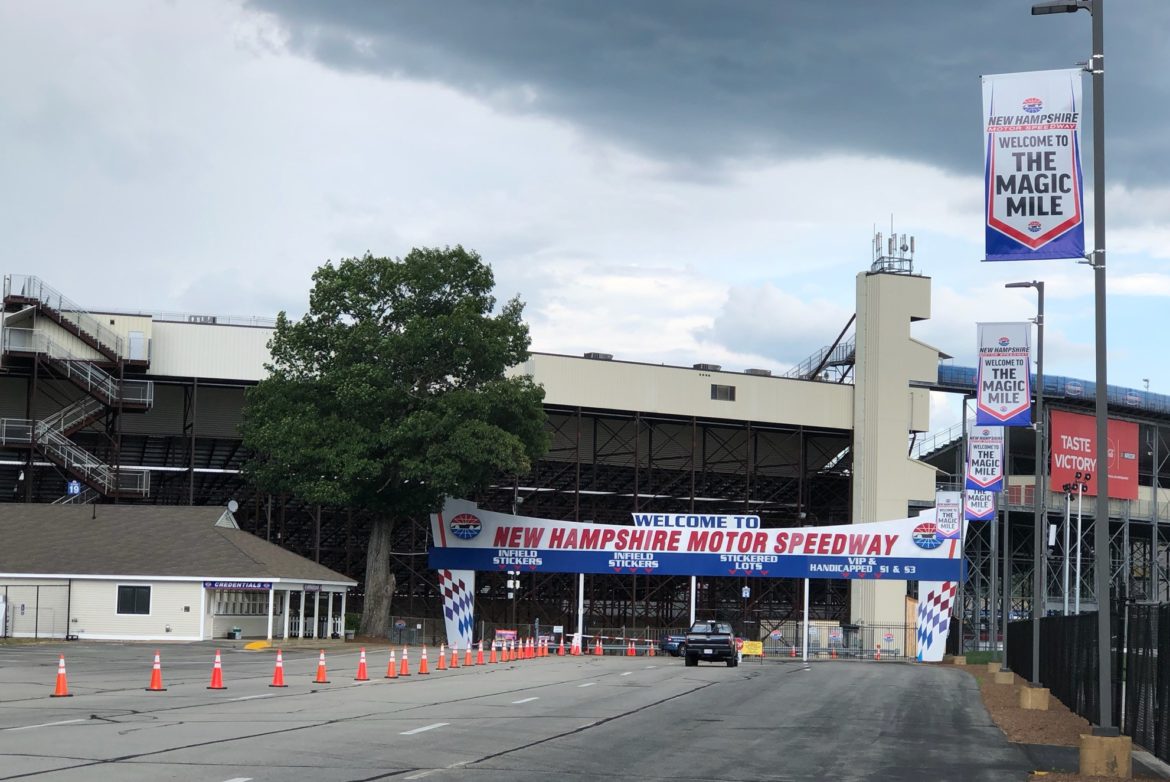 CONCORD – Pit crews and drivers for an upcoming NASCAR race in Loudon and their close to 12,000 ticket-holders for a race are descending on the state, but there are measures in place to help protect the public, Gov. Chris Sununu said at his news conference on Thursday.

Sununu said what is likely to be the largest public event since the pandemic closed many businesses in the state and forced many people to mostly stay at home for months, then to social distance, is a sign that life is getting back to normal with some differences.

Sunday’s Foxwood Resort Casino 301 NASCAR Cup Series Race at New Hampshire Motor Speedway at 3 p.m. will allow about a third of the typical fans to enter the stands and cheer on their driver.

He said last week he wrote a letter to Steve Phelps of NASCAR that he would allow for a “modified quarantine” for race workers. Rather than having to quarantine for 14 days prior to entering the state, as is required for all coming outside of New England, staff, drivers and other NASCAR employees will be restricted to NHMS and their hotel.

Sununu said they can’t even go out for coffee. He said NHMS staff has assured him that 90 percent of the ticketholders are coming in from New England and the rest are to self-testify that they have quarantined for 14 days prior to coming for the one-day race.

About 12,000 tickets are being sold for the event after officials for the event worked with the state Department of Health and Human Services to come to an agreement on how they can hold a race safely here in a pandemic.

“They cannot go out in public,” Sununu stressed.
He said there will also be modifications for open and closing ceremonies for social distancing to be achieved.

“So it will look and feel different,” than the traditional NASCAR which has been held here for years.

Race fans will also need to go through temperature and health screenings before entering the stands.
Sununu said he and Dr. Benjamin Chan, state epidemiologist, felt confident that with an elevated message to wear masks, practice good hygiene with washing hands frequently and staying six feet apart, that the “elevated message” will help New Hampshire avoid an outbreak.

New Hampshire has among the lowest rates of the novel coronavirus in the country though officials are tracking a slight uptick in the number of cases over the past few weeks, Chan said earlier in the week.

Thursday’s Numbers
Health and Human Services Commissioner Lori Shibinette announced 33 new cases of COVID-19 in the state Thursday for an overall total of 6,544. There were two new hospitalizations for a total of 692 cases to date and four new deaths were reported, all at long-term care facilities.

Shibinette also announced the closing of an outbreak at Birch Hill retirement center in Manchester which has suffered from at least three cases of the virus or more since April 27.

“It has been a long run and we are happy we are closing it today,” noting that now, only three other long-term care facilities are facing outbreaks. She also announced progress on the testing front.

Quest labs has increased testing in pools for the virus and expects backlogs to be caught up by Friday with waits for results going down from about seven days to about 3 to 5 day, reducing the wait time by almost half.

She also said the state was in transition of switching its asymptomatic testing in long-term care from a private vendor to in-state hospital systems which will also reduce wait times. The state still has nine temporary COVID-19 testing sites available and that will continue through August.

Good news also came on the state’s unemployment front Thursday.
For the first time since the pandemic, New Hampshire has twice as many people coming off the unemployment rolls than it does enrollments, Sununu announced.

Currently, about 65,000 of the state’s 1.3 million residents are receiving unemployment benefits, down from over 100,000 since March.
The statistics show an unemployment rate of 8.4 percent, far from what they were before COVID-19 shut the state down in March when about 3 percent unemployment was the case.  But it is far better than it has been.
“We have a long way to go,” Sununu said.

There are over 1,000 jobs now advertised on the state’s website and several hundred employers looking to hire.
He said we still don’t know the true impacts of the loss of the federal weekly $600 checks as of this week but there is still state money that will be going out the door for the unemployed.

“It will be interesting to see if this incentivizes people,” to go back to work, Sununu said. “We just don’t know.”

Sununu took the time to summarize the funds out there or left in accounts aimed to help provide financial relief from the pandemic through the federal CARES Act.

There are eight programs currently available with money to give away, Sununu said.

– The empowering youth program by DHHS for programs that help middle and high school aged kids. There is $2 million for non-profit and for-profit institutions that provide summer and recreation opportunities for youths. Applications will be taken till Aug. 16.

– The GAP Fund has $30 million for those businesses and nonprofits which did not qualify for other programs. The deadline for applications closes Aug. 4.

– Traditional Veterans Services Support Program. This helps provide transportation, home services, physical therapy, and other services veterans who have come up short on funding due to the pandemic. Application ends Aug. 10 for those organizations.

– Veterans Services Organization Fund. This is for the VFWs and other institutions that have lost revenue due to the pandemic. That application also closes Aug. 10.

– A re-launch is being announced for the Health Care Provider Program, one of the first funds which were provided to keep health care and hospital providers at work. The state will reopen that fund for a third round. This can help for providers of behavioral health, doctors, and others and the application went live Thursday and runs through Aug. 13.

– A relaunch of the Long-Term Care Provider Program. Today about $11 million has been given out and another $19 million is available, Sununu said. Even if you have already received money, you can re-apply and the application period ends Aug. 13.

– A relaunch of the Safe Scholars Campus Modification Plan. About $10 million was launched to support private nonprofit colleges and universities.

“We put a lot in the public systems but this program goes specifically to private schools,” Sununu said. It launches Friday and institutions must be New Hampshire-based, approved, and accredited and have an endowment of less than $300 million.

“We want to make sure those doors are open as much as possible,” he said.
The application is open for one week for these institutions.

Many are concerned that with the lifting of the moratorium on evictions and the loss of $600 federal weekly stimulus that there will be this perfect storm of evictions.

“That is why I created a $35 million fund,” Sununu said, using federal dollars for coronavirus relief.
He said one “big” area of concern is also commercial evictions for businesses.  He said he hoped the Main Street relief fund would cover a lot of that loss.

Duty to Report
Sununu and Shibinette said there is no duty for businesses to report to the public if they have had an employee test positive for COVID-19. Shibinette said contact tracing allows the state to contact individuals who have had more than 10 minutes or more of prolonged contact with such individuals and Sununu said requiring the reporting on that would be an infringement on privacy.