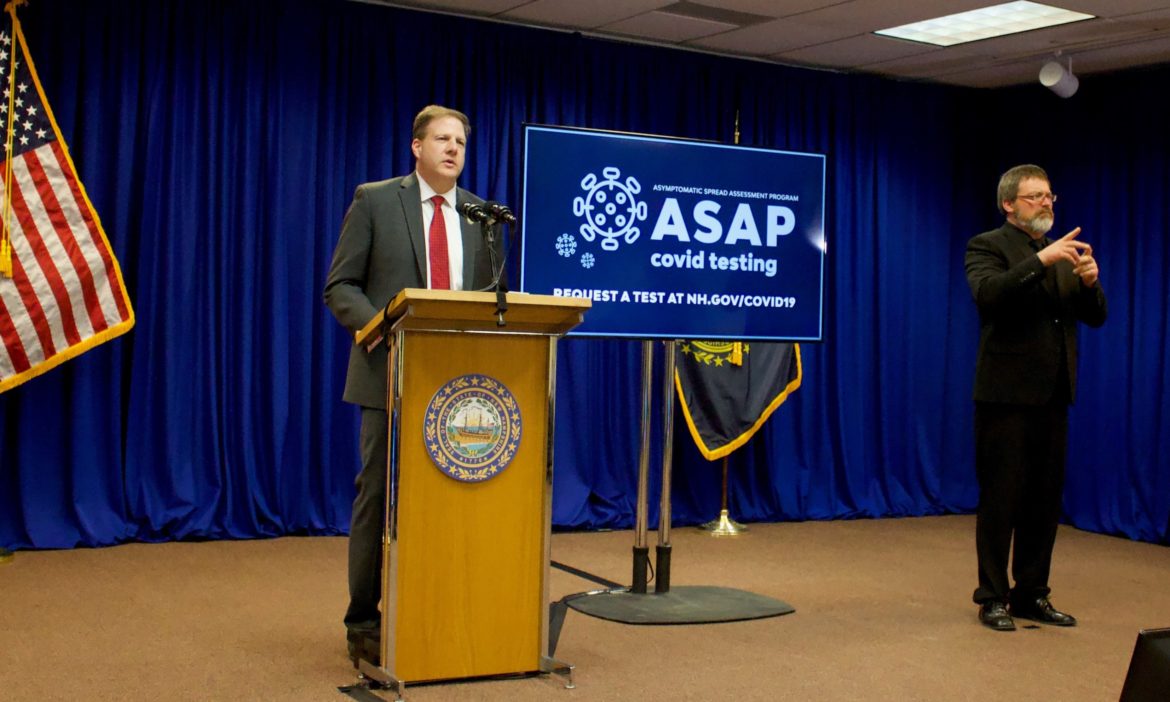 CONCORD – COVID-19 will not deny June brides their day, the state’s ocean beaches are now places to sunbathe, and sit-down dining can go indoors June 15 after Gov. Chris Sununu lifted bans on these and some other activities on Friday.

“Even with these tough times there is something to smile about,” Sununu said. “We appreciate the state doing an outstanding job,” not only with three months of staying at home but in this week, peacefully protesting racial injustice at the hands of police.

The state reported five new deaths Friday and 80 new confirmed cases of the novel coronavirus totaling 4,953, but it is increasing testing to the point where supply is meeting demand and announced it will begin testing those who suspect they are asymptomatic in a program called ASAP.

Go to nh.gov/covid19 and fill out the testing registration forms, he said.

Sununu said he plans to be ASAP tested this weekend and although he has no symptoms and has not experienced any in the past, he is still curious to know whether he may be asymptomatic with the virus.

There were four new hospitalizations reported Friday with a total of 426 people who have gone to the hospital at some time during their illness. And the state has tested 87,000 of its 1.3 million residents for the virus.

Sununu said the state is seeing positive trends over time and enough medical capacity in place now to absorb outbreaks, which allows him to take steps to open up more aspects of life as we once knew it before March.

At his Friday briefing, Sununu announced he had “all good stuff I think, for the most part,” to report out, because “we have the tools in the toolbox,” to better help us deal with the virus and any outbreaks.

The state received 13,000 applications from owners of small businesses interested in getting some of the $400 million federal CARES Act funding to be distributed to help businesses impacted by closures due to COVID-19.

Today, businesses should be receiving emails requesting finalization details which need to be completed by next Friday to receive funding, Sununu said. The process is being handled by the New Hampshire Department of Revenue Administration and it should take only 10 or 15 minutes to fill out.

The formula asks businesses what their revenue was last year, what is their anticipated revenue this year due to COVID-19 and considers any other federal funds they may have received before issuing the grant.

It is for businesses with revenue under $20 million and it is not for those who are self-employed because he said there are other programs for them.

On Friday morning, with the weather expected to reach about 85 degrees across the state and lots of humidity, Sununu announced that ocean beaches could open immediately and allow for people to sit down, lay a blanket and enjoy the beach so long as they remain at least six feet from others.

He said he did not expect to be able to make that announcement so soon but he looked at data from other states across the nation which showed no major outbreak of the virus weeks after opening. Parking will still be limited to 50 percent capacity. There will be no traffic allowed on Ocean Boulevard in Hampton as it has become a pedestrian walkway for the summer and there are other tools the state will take to manage crowd size, he said.

Among the first venues to open in the state were golf courses to in-state residents only. With all surrounding states allowing golf of their own, Sununu said he will allow out-of-state residents to play golf here. The provision will also allow the course to move to phase two which would shorten the breaks between groups and allow the sharing of golf equipment among family members.

Attractions
Tourism type attractions that are outdoors will be allowed to open, including petting zoos, ropes courses, and even the Mount Washington Auto Road.

Not allowed to open yet are some major attractions like Storyland and Canobie Lake Park, Excursion Rail, and some others but efforts are still underway to see if they can salvage their summer season, with possible guidance offered in the next few weeks.

Restaurants
As of June 15, indoor dining will be allowed at 100 percent capacity in the northern part of the state but in the lower four counties of Rockingham, Hillsborough, Strafford, and Merrimack, where much of the COVID-19 cases have been confirmed, restaurants will be allowed to open at 50 percent capacity, Sununu said.
Face masks will still be required for employees.

Nursing homes
The state is not yet ready to open its nursing homes for visitors, but Sununu said he is working on that and looking at what other states are doing. He noted portions of Massachusetts are doing that.

“They have been alone,” Sununu said of the elderly living there in some of the most impacted places in the state.

“Eyes on a loved one is so important,” Sununu said for family members who have been kept away for three months.

The state’s new sentinel testing of the nursing homes will help provide a better look at what is happening in those facilities and added testing capacity will also help.

“Testing is obviously a big part of that, so we can constantly monitor that,” Sununu said but visiting “is something that has to happen sooner than later.”

Community pools
The community pools could open now if they were able to limit them to 10 or fewer people in one location at a time, but as the state moves forward to allow, say 50 people to gather at a time, those pools might be able to open, Sununu said.

He noted most community pools are regulated by the towns and it would be up to them to make the call. Sununu said the hope is that when the “stay-at-home” order is lifted to an advisory, as may happen in the next week, there could be kids jumping into the pools.

Wedding receptions
Following the guidance for opening up indoor dining, Sununu is allowing for wedding venues to open June 15 with capacity capped at 50 percent of capacity and based on square footage.

Dancing will be discouraged, but “we are asking people to be smart about dancing,” though he joked that there would be no “funky chicken, no macarena, no conga lines.”

Seriously, Sununu said, “we do appreciate that these are one-time events for most people.”  The limits on wedding venue capacity are due to the fact that unlike a restaurant setting, people mingle at weddings.

Overnight  camps
Children will be allowed to come into the state and go to summer overnight camps with detailed guidance on the state website, starting June 28.

Those Left Out – Stay Tuned

Sununu estimated that 97 percent of the state’s businesses will be able to be open in some capacity by June 15.
“With these openings, we understand not every business is being allowed,” Sununu said.

Those include indoor gyms, which are problematic because of sweating and breathing, large parks that attract large numbers, and movie theaters. He said it is “very hard to address those final venues,” and said he appreciated everyone’s patience.

The steps he said he is taking are “steps forward which put us in a good position…in terms of safety,” and that we can move a step backward if there are problems. He thanked his “open-up” economic advisory board for their time and efforts working individually on sectors of the economy and said he is proud of the results.

“I will put our guidance documents up against anyone’s around,” he said, noting that it did not look at the economy as a whole but individual types of businesses with stakeholder input.

Finally, he said his intent is to allow the stay-at-home order to sunset and allow for something more advisory in its place in a matter of weeks.
For more details on the governor’s orders visit https://www.covidguidance.nh.gov/welcome