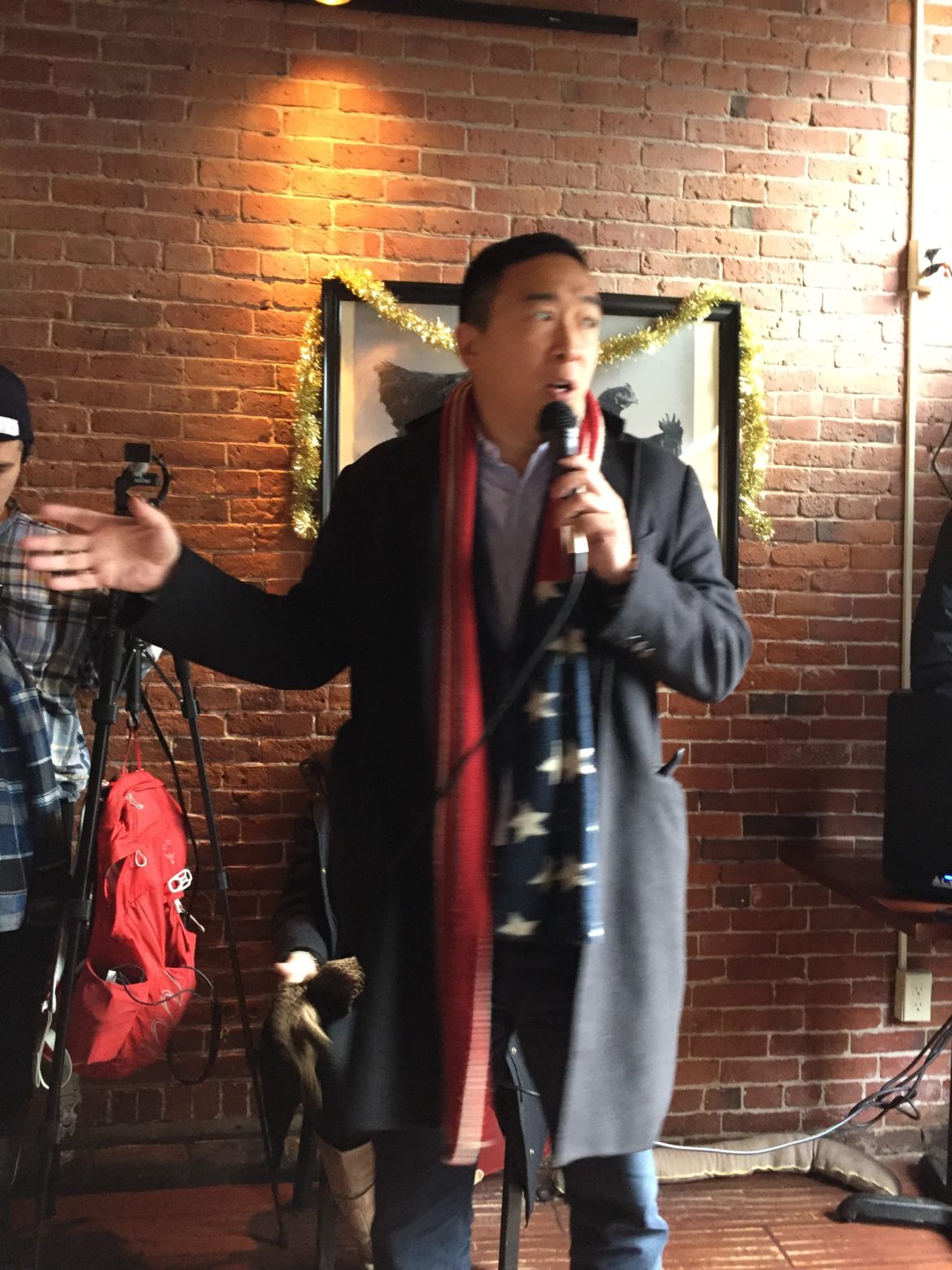 Andrew Yang rallies the crowd at Cure, a trendy restaurant in Portsmouth.

PORTSMOUTH – Last May I met up with presidential candidate Andrew Yang and when our paths crossed again on New Year’s Eve 2019, it did not feel as if time had passed.

Yes, we were in Cure, a trendy Portsmouth restaurant this time, yes Yang was wearing his trademark “MATH” pin and Americana scarf, and yes, I was surrounded by smart, trendy hipsters. It was as if time stood still.

But this time, it’s the eve of election year.  I sat next to Charlotte Fardelmann, 91, of Exeter. Her son, George, 60, brought her to meet Yang.

Charlotte shared with me she’d been a reporter in the 70s, writing about the women’s movement. I felt honored to share a bench and, as with my last visit with Yang, knew I was surrounded by movers and shakers.

Yang spoke to the crowd about the thousands of manufacturing jobs lost in northern New Hampshire and malls and stores closing elsewhere, making a point of how prosperous Portsmouth appeared.

Why are the stores and malls closing? “One word answer,” Yang hinted to the crowd.

They obliged and responded: “Amazon.”

Amazon’s doing $20 billion in business “and paying zero in taxes and I say that’s wrong,” Yang said. “It’s up to you, the people of New Hampshire to change it.”

Because of the power New Hampshire voters have with the first-in-the-nation primary.

“I did the math. Do you know how many Californians each New Hampshire voter is worth? 1,000 each,” Yang said.

Ariela Mann, 29, and Brianna Pearson, 27, both of Brooklyn, drove down from New York to see Yang. They stood in their Make America Think Harder (MATH) gear, next to a young guy who was live streaming, providing a podcast.

Both Mann and Pearson had tickets to spend New Year’s Eve at a house party for Yang. I was a little jealous. The vibe of the Yang Gang are people who not only have plans for New Year’s Eve, they will probably not be getting home until well into 2020.

When I asked Pearson, who’d supported Bernie Sanders in 2016,  about her support of Yang, she responded:

“It was in exploring alternative media through podcasting and things like that that I found Andrew Yang and through listening to him I got really fired up and really excited.

Gavin Vevski, 37, and Rami Benayed-Cherif, 25, referred to themselves as “Political Tourists.” They came to New Hampshire to see as many candidates as possible, were waiting for a selfie with Yang and then onto see Tulsi Gabbard.

As I chatted with them, several young men chanted, “Yang Gang! Yang Gang!” It was as if I were in my fourth block high school class; enthusiastic mayhem with the joy that the bell will ring soon.

And the vibe of the event felt entirely as thrilling as that dismissal bell – a vibe of an afternoon of potential and energy and practice.  And very much like in May, the vibe of the Yang Gang felt knowledgeable, energized, and quick to utilize social media to share their enthusiasm.

It’s interesting to watch – as someone who still remembers rotary phones and the Star Spangled Banner at midnight, it’s pretty inspiring to be around lively, well-informed young people.

But Yang does not talk down or over, does not dismiss those who may not know hashtags from hash. He’s funny and self-deprecating, smart. Oh, so smart.

Yang would be the one you’d want to sit next to at any event; he listens, he’s surrounded by intelligence, he eagerly celebrates the young, the old, the practical, the technologically challenged.

The New Year’s Eve vibe with Andrew Yang?  Just as millions will watch the ball drop on Times Square, so, too, will millions be watching the Yang Gang in 2020.