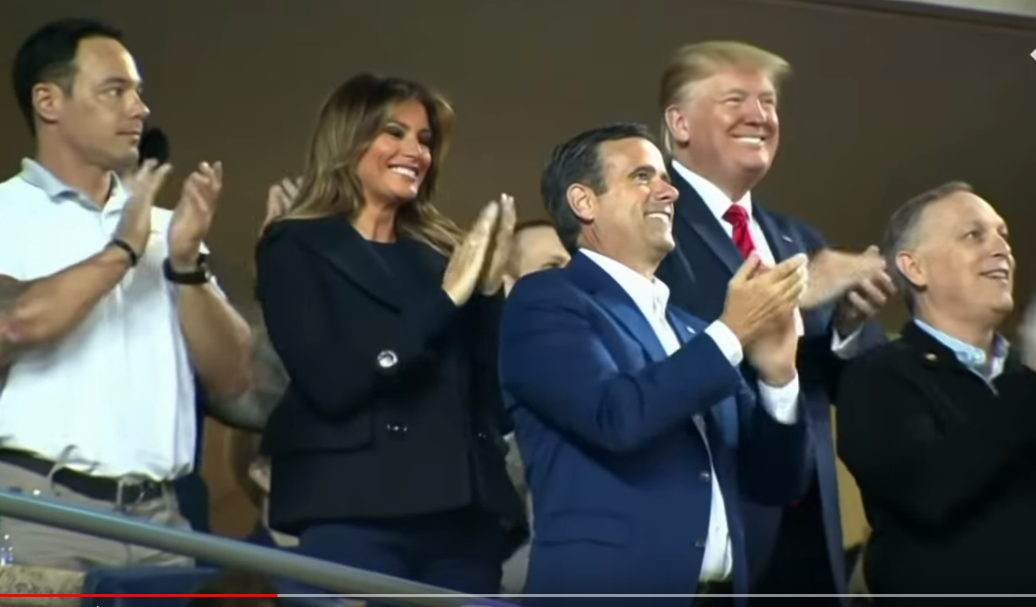 President Trump and his wife, Melania, are pictured at the World Series game Sunday night in Washington, D.C.

By BOB CHAREST, Why You Should Care NH

You can tell a lot about a news source when you see how the same event is reported by different media outlets. In that vein, here is this morning’s coverage on the internet about the same event: President Trump attending the World Series game in Washington, D.C., last evening.

I think it’s especially telling when you read past the headlines and see how an event is reported. For our purposes, the headlines will do. The event was public, not so open to misinterpretation when you consider the venue and the fact that you can evaluate for yourself by watching the video.

My concern, and probably yours, too, is what happens when the event is not so public, when it is based on unnamed sources and on quoting unidentified people? Can we “trust” the source? And what is truth anyway? People have since time began had a way of looking at the same event and coming up with a different take. After all, we live in the time of “spin,”  “reframing” and “controlling the narrative.” Whatever happened to the good, old truth? Does that even exist anymore?

CNN.com: Trump gets cheers, ‘lock him up’ chants at World Series in DC

From what I’ve seen of past coverage by these two news outlets, I would have expected the headlines to come from the opposite sources.

MSNBC.com: Trump showered with boos, chants of ‘lock him up’ at World Series game

WashingtonPost.com: President Trump met with sustained boos when introduced during the game

DrudgeReport.com: Trump Greeted by Boos, Chants of ‘Lock Him Up’ at World Series Game…

And here’s where it starts to get interesting:

TheAtlantic.com: Trump’s Error at the World Series. The president made a rare public appearance before a crowd he hadn’t screened—and was loudly booed.

Newsweek.com: ‘Lock Him Up’: Donald Trump’s Face Drops As He Notices Crowd Are Booing at World Series

Motherjones.com: Enjoy These Deeply Satisfying Clips of Trump Getting Booed at the World Series (In defense of Mother, I will say that this headline was reported under a banner called “Impeachapalooza.”)

Nytimes.com: For Trump, No Joy in Mudville (Is it any wonder Trump refers to them as the “failing” New York Times whenever he tweets about them?

And speaking about tweets, the social media posts on this event went in about a thousand different directions. And in this day and age when a lot of us get our news from social media, I see that as a very dangerous situation.

All of this is to say that you as the reader must be in a special place whenever you read something nowadays. You are a news consumer, and as the consumer, for you it’s the same rule that applies whenever you consume anything: Buyer beware.

I do want to point out that some of the aforementioned pieces are “columns” not breaking news stories. Unfortunately, they were not labeled as such, leading some readers to accept the headlines as news and not opinion. (A few media sources did have the intelligence to clearly label their pieces as “Opinion,” which I suspect is still confusing for some people, who will accept the opinion as fact.)

Why does this matter?

The news matters because right now this country is severely divided (my opinion), but we live in a place where what unites us is still stronger than what divides us. But where does that end? When will that end?

This news website, InDepthNH.org, is presenting a talk on Nov. 12 titled “Why the Future of News Matters.” Full disclosure, I am a member of the board of the presenting organization, the New Hampshire Center for Public Interest Journalism, which also happens to be the publisher of InDepthNH.org.

Nancy West, the founder and executive director of this organization and website, has invited some interesting people to this event, among them the candidates for governor of New Hampshire.

Keynote speaker will be Gloria Norris, a filmmaker and novelist who now lives in a place called California, or “KooKooLand,” if you believe her father. She wrote a book about growing up in Manchester, a book with the title that Gloria’s father gave to the place of Gloria’s current residence. It’s very well done, and Gloria has agreed to come east once again and talk to us. Gloria is still writing. Her essay for Marie Claire in 2016 was an essay on gun violence: “I Pulled a Gun on My Father at Just 9 Years Old.” Gloria’s gritty candor is sobering. You can read that essay here at this link: https://www.marieclaire.com/politics/a18745/i-pulled-a-gun-on-my-alcoholic-father/

Gloria has an amazing resume. She worked in New York as an assistant to film directors Brian De Palma, Martin Scorsese and Woody Allen. Now, she is a screenwriter who has traveled from Paris to the Amazon. Her independent films have been shown at the Sundance, Toronto, and Tribeca Film festivals.

In addition to Gloria’s talk at the Derryfield Restaurant, 625 Mammoth Road, Manchester, on Nov. 12, four other impressive speakers will serve on a panel discussing why the news matters. They are Executive Councilor Andru Volinsky, who recently announced he’s running for the Democratic nomination for governor; Gilles Bissonnette, the legal director for ACLU-NH, who everyday is right at the forefront of issues involving access to government records; Richard Gagliuso, an attorney for Bernstein Shur whose practice takes him into a myriad of First Amendment issues; and Nancy West, the founder of InDepthNH.org.

Sen. Dan Feltes has signed on, too, and Gov. Chris Sununu is considering his invitation as well.

I hope you’ll consider being in the audience if you have a desire to hear about the current state of journalism in New Hampshire. Please see the invitation elsewhere on this website and here.

And in the interest of full, full disclosure. In addition to myself, Rick Gagliuso and Gloria Norris are also board members of the New Hampshire Center for Public Interest Journalism.

Bob Charest writes this occasional column for InDepthNH.org. He has been involved with the website since its inception in 2015 and serves on the board of directors of the parent organization, the New Hampshire Center for Public Interest Journalism. He may be reached at charestepsom@gmail.com.