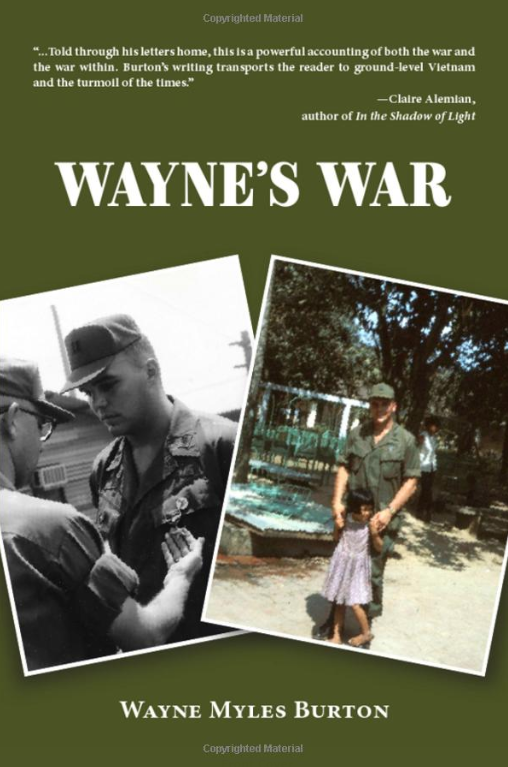 Do you remember the Vietnam War?  I do.  I was a young woman in my twenties and living and working as a secretary (G5) at the Naval Facilities Engineering Command in Washington, D.C.

It felt like war to me and I know how a young Captain Wayne Myles Burton felt from reading Wayne’s War written later on in his life exploring the kind of man he became because of the war.  We can only guess about the emotions that can still be too close to the moment.

Burton relies on the letters he wrote to his wife Betsy during his time “in country” to tell his story. His emotions sometimes do not reflect the trauma he experienced during battle.  Burton’s memories do reflect the times that also involved deep racial division.

The madness of body counts on a daily basis were so calculated.  Burton reminds us of the underlying angst we all felt as we learned more about the political power struggles and what was really at stake in Vietnam.  It was a time of political craziness and we all kept wondering what to believe.

Captain Burton was a young kid signing up to get a $40 stipend by attending ROTC training at Bowdoin College.  He was not a dedicated student at the time but signed on for a tour that would rock his world and change the course of two countries – and his life.  Burton served as a staff officer and company commander in the 9th Infantry Division in 1968-69 in the Mekong Delta.

Reading Wayne’s War made me remember how I was struggling to figure out my own life.  My grandson wrote a paper for an English class about the Vietnam era and I asked to read it after he interviewed me.  I was not ready for his condemnation of America as the boogeyman and rightfully so.

I have also been to the Vietnam Veterans War Memorial showcasing all the names of the 58,000 people killed.

What a waste of time, energy, money and people who should be here enjoying their own grandchildren.

Then examine your own feelings.  And say a prayer.