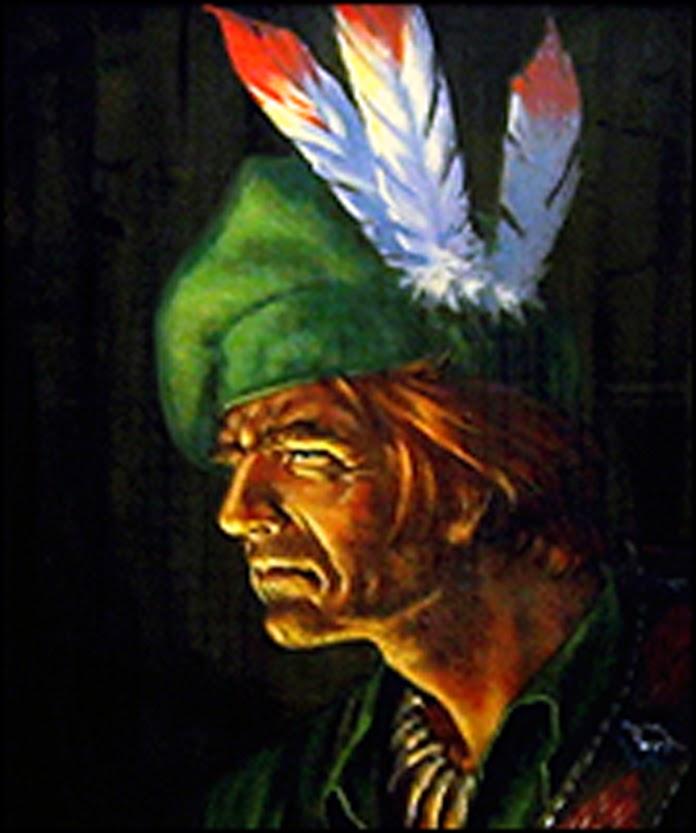 Few New Hampshire citizens played a more unique and controversial role in the pre-revolutionary period of what would come to be the United States of America than Robert Rogers.

Robert Rogers, or Rodgers (7 November 1731 – 18 May 1795), was a New Hampshire resident and colonial frontiersman. Born in November of 1781 in Methuen, Mass., his family soon moved north to what is now New Hampshire settling in a town Rogers refers to in his writings as Mountalona and today encompassing the towns of Dunbarton and Bow.

His service to the people of New England, particularly in the war known in the colonies as the French & Indian War (in Europe the Seven Years War) is well documented and a study in the fame and controversy that surrounded this remarkable man. At only 14 years of age, he became a member of the militia in King George’s War (1744–1748).

Many military historians attribute the seeds of the American Revolution’s success to the ideology, tactics and strategies of the famed Rogers Rangers, started under his leadership. Indeed, one of his favored rangers was John Stark who would later set aside his “Ranger temperament” to become a general in the Colonial Army and utter the famed phrase “Live Free or Die” in the heat of battle.

Legend has it – though no documented evidence exists – that, after a brief stint in England where he was feted as a British hero of the frontier, Rogers returned to America and offered his services to George Washington who turned him down for fear that he was a loyalist spy. Rogers, perhaps in spite, or perhaps simply because he knew no other life than that of frontiersman, joined the British and fought as a loyalist.

We will, likely, never know if Washington was right about Rogers and the legend may, in fact, be nothing more than revisionist history fostered by the likes of the peripatetic historian Francis Parkman who nearly one hundred years after Rogers’ day, set his sights on rehabilitating Rogers in the eyes of a public that remembered only his final betrayal in his service to the army of King George.

Yet, the legend of Washington’s actions – true or not – and certainly the work of Parkman, may contain the seeds of Rogers’ historic rehabilitation. After all, today Rogers is revered as the father of the Rangers and the Green Berets, while his fellow loyalist Benedict Arnold’s name has become synonymous with treachery and betrayal.

Lest we fall into the Parkman trap of romanticizing the frontiersman, it should be pointed out that Native Americans of the time – with the exception of a small number of Mohicans who served as scouts and fought beside him – referred to him as Wobomagonda, translated to “White Devil” because Rogers and his Rangers could be every bit as ruthless as any of their rivals.

The truth about Rogers probably lays somewhere in between. The Rangers may have been pitted by history against the native indigenous people – but they drew much of their strategies, dress and temperament from the very same people and many historic documents evidence their admiration for the bravery, courage and skills of their foes.

In this two-part episode it’s our good fortune to have author and historian Stephen Brumwell speaking with us from his home in Amsterdam.  Stephen Brumwell is the author of numerous books including White Devil: A True Story of War, Savagery, and Vengeance in Colonial America about Robert Rogers and his Rangers.

Stephen Brumwell is a former newspaper reporter – so he knows well the process for digging up a story and appreciating the nuances of that story. Stephen received his Ph.D. at the University of Leeds. In addition to White Devil his works include: Redcoats: The British Soldier and War in the Americas, 1755-1763, a story about ordinary soldiers who fought the French and Indian War. George Washington: Gentleman Warrior; Paths of Glory: The Life and Death of General James Wolfe; The St Francis Raid: Vengeance and Survival in Colonial America; and his most recent book Turncoat: Benedict Arnold and the Crisis of American Liberty – from Yale University Press; a must read for anyone who wants to truly understand the role of Benedict Arnold in the American Revolution in its broadest sweep.   Brumwell also is the author of many journal and magazine articles and a recipient of the Authors’ Foundation Elizabeth Longford Grant. He lectures regularly in the U.S. and the U.K.

After the Revolution, Rogers returned to England where he died unappreciated and impoverished in London – far from his family and the woods and mountains of his native New England that he loved so much.