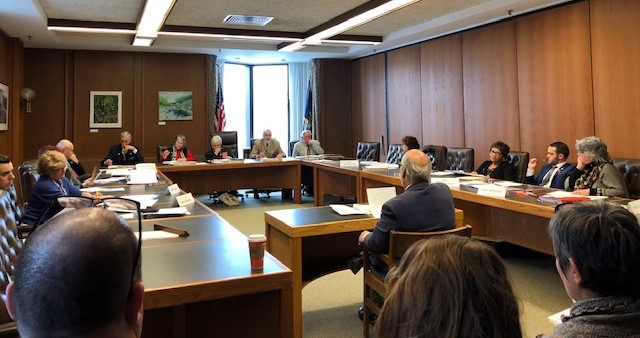 CONCORD – A bill that would make public serious police disciplinary records was opposed as written by the New Hampshire Troopers Association on Wednesday.

House Bill 153 would make the disciplinary records subject to the state’s right-to-know law when a case is adjudicated that involves a police officer’s lethal use of a firearm, an officer is found guilty of sexual assault or “a sustained finding was made of dishonesty,” including perjury.

Det. Sgt. Marc Beaudoin, president of the New Hampshire Troopers Association, said there would be “unintended consequences” of opening an entire personnel file to the public because other officers who witness misconduct are compelled to answer questions or lose their job.

“Bad police officers make us all look bad,” said Beaudoin. “We support transparency,” except information involving other police officers who must answer questions for the report.

The public does get the benefit of public information from police investigations, he said, citing the reports released when a police officer uses a firearm.

If the language was amended to allow for only executive summaries of the discipline to be released, Beaudoin said that would satisfy the public’s interest and protect victims and civilians who may have had to testify during the investigation.

But Republican state Rep. Ned Gordon, a member of the House Judiciary and a retired judge from Bristol, asked who would be writing the executive summaries.

“Either the chief of police or state police commander,” Beaudoin responded. “It could be a brief summary.”

Gilles Bissonnette, legal director for the American Civil Liberties Union of New Hampshire, said making available only a brief summary does not give the public the context to know if authorities are doing their job.

“The public should vet how the government investigates crimes. It’s critical that the public have access…to the underlying documents,” Bissonnette said. “Regardless of whether there are criminal charges filed, the public has a right to know how the police handled the situation.”

Carla Gericke of Manchester said she supported more openness than currently exists, adding she came to Concord to support the bill.

“We need this bill, which is quite narrow in its scope, and I think as our representatives you should ask, ‘Is this the kind of information we should know to keep our officers accountable?'” Gericke told the committee.

“I feel police officers, when conducting themselves, must be held to a higher standard and that should include full accountability, which includes full transparency,” Saad said.

He said the idea of an executive summary leaves the person writing that summary with the power.

“That acts as a filter to the public and I don’t think that person should have that power,” he said.

A full committee work session on House Bill 153 is tentatively set for Feb. 6 at 10 a.m. before the House Judiciary Committee. The bill was co-sponsored by Rep. Paul Berch, D-Westmoreland.