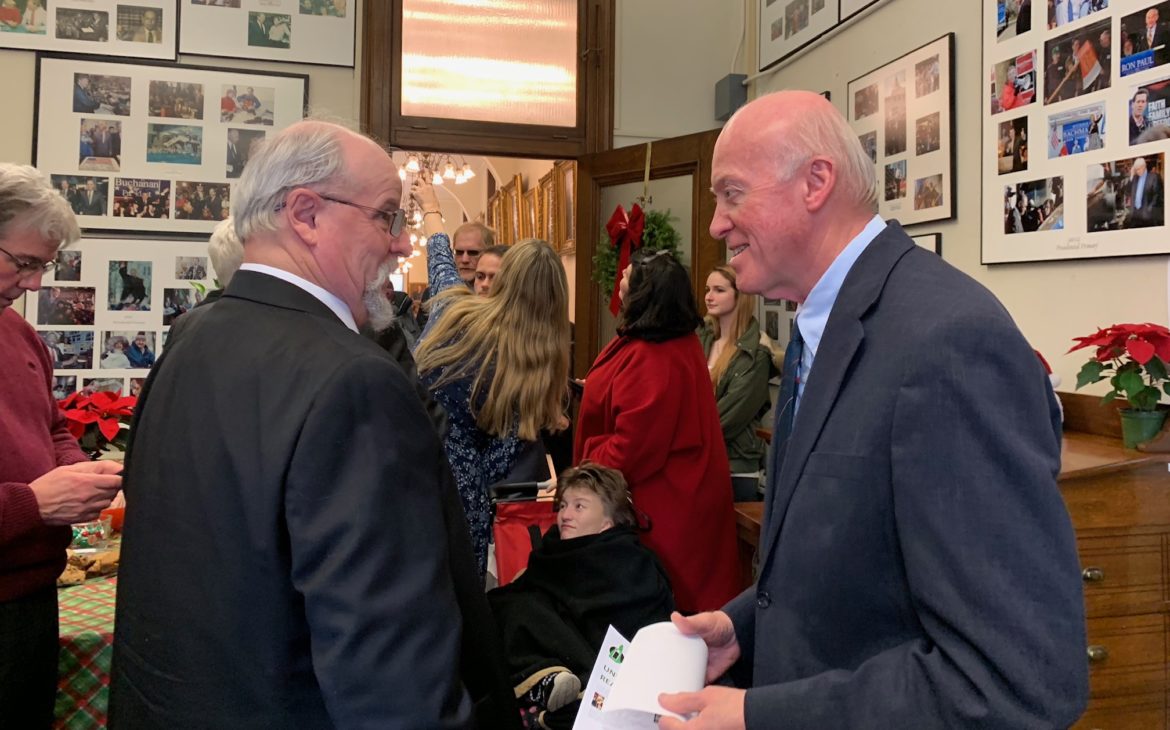 This story will be updated.

CONCORD — The election of Secretary of State was old guard versus new guard, change versus tradition and the two sides battled it out for more than two hours before lawmakers could decide who should hold the post.

In the end, tradition prevailed by four votes although it took two votes before current, long-serving Secretary of State Bill Gardner was re-elected to the post he has held for 42 years, the longest tenure in the country.

For the first time in many years, Gardner faced a serious challenge for the post that oversees state elections and chronicles state government activities.

Fellow Democrat and former Executive Councilor and gubernatorial candidate Colin Van Ostern of Concord waged his campaign for about a year, running on a platform of modernizing the office, protecting the rights of eligible voters and greater financial accountability.

Gardner thanked lawmakers for electing him to another term saying he has done recounts where a vote or two determines who wins, but he had never been in an election like this one before.

“Thank all of you who have given me another term as Secretary of State. I am very grateful you let this happen,” Gardner told lawmakers after the vote. 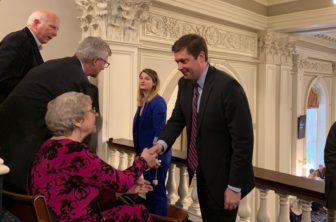 He invited new legislators to come to his office saying he welcomes their ideas.

Recently Gardner ran afoul of members of his own party over his support for recent Republican generated laws restricting voting eligibility and serving on President Trump’s election fraud commission.

Gardner said he agreed to participate on the commission to be able to debunk claims about voter fraud in the state, and his supporters expressed concern the state’s vaulted position in the presidential selection process could be at risk if he were replaced.

Van Ostern raised nearly a quarter of a million dollars for the race, something that had never been done before.

He claimed the office was outdated and needs to use 21st century technology to make elections more efficient and to provide greater transparency.

Gardner and his supporters tout his honesty, integrity and his fairness in conducting elections, and stressed the need for a bipartisan hand to guide the office and not politicize it to favor one party over the other.

During the nominations at the Joint Session of the House and Senate, Gardner had the backing of longtime legislative leaders such as the Dean of the Senate Lou D’Allesandro, D-Manchester, Senate Majority Leader Jeb Bradley, R-Wolfeboro, and House and Senate veteran and retired district court judge Ned Gordon, R-Bristol.

But his opponents said a change is needed, as local election officials wrestle with outdated voting equipment, a sometimes uncooperative Secretary of State, and noted he angered municipal officials the last two years when he refused to acquiesce to postponing town meeting elections during blizzards.

The two sides pulled out all the stops for a race, which in most years has seen no one challenge Gardner.

Democrats backed Van Ostern by an eight-to-one margin at a recent House caucus, as many young, first-time House and Senate members joined long-time Democrats backing Van Ostern. They believe Gardner is too close to Republicans.

Gardner was nominated by his former Bishop Bradley teacher D’Allesandro, who praised his work over the years and his fairness, integrity and honesty.

“Life is all about one thing: relationships,” D’Allesandro said. “There are no term limits on relationships.”

He noted no one is perfect, but Gardner’s office has an open-door policy that serves everyone.

But Rep. Paul Bergeron, D-Nashua, a city clerk cited problems with voting equipment, arbitrary decisions from Gardner and failure to carry out some of his duties.

“This is about standing up for our communities and local officials, accountability, efficiency and checks and balances, not one man’s judgment,” he said. “Local officials need a partner in the Secretary of State, but we’ve seen arbitrary decisions that have hurt our voters, endangered public safety and threatened local control.”

He noted he had been Gardner’s friend for 35 years, but his time has come and gone.

“I know what we need,” Bergeron said. “We need to elect Colin Van Ostern.”

Other Van Ostern supporters praised Gardner for his work over the years, but agreed a change is needed.

“I deeply respect Bill Gardner and he will always hold a place in New Hampshire history,” said Rep. Mary Heath, D-Manchester. “But I also know it is time for new leadership.”

“We are fortunate we live in New Hampshire,” Bradley said.

The 400 members of the House and 24 members of the Senate vote for the Secretary of State and the state Treasurer every two years on Organization Day when they are sworn into office.

On the first vote for Secretary of State, neither candidate had enough votes to win.

On the second vote, Gardner received 209 and Van Ostern 205. On that tally, 208 were required for victory.

Gardner’s staff laid out punch and kept refilling the cookie platter as confusion reigned when Gardner was told he had won on the first vote and jubilantly headed for the House floor, only to be turned back and told the first vote wasn’t a victory.

Speaking to reporters after the final vote, Van Ostern said, “I regret not winning but I am really proud of what we did. I am proud that no one has done this in my lifetime.”

Gardner has said he wants to be the Secretary of State when the New Hampshire Presidential Primary celebrates its 100th anniversary in 2020 and the State House’s Bicentennial Celebration in 2019.

Democrats took control of the House, Senate and Executive Council for the first time since the 2009-2010 term, when Lynch was governor.

He told lawmakers Wednesday when he swore them in with the Executive Council, it will be an interesting two years.

But for those two years, Gardner will continue his tenure in the office he has held for 42 years. No change there.