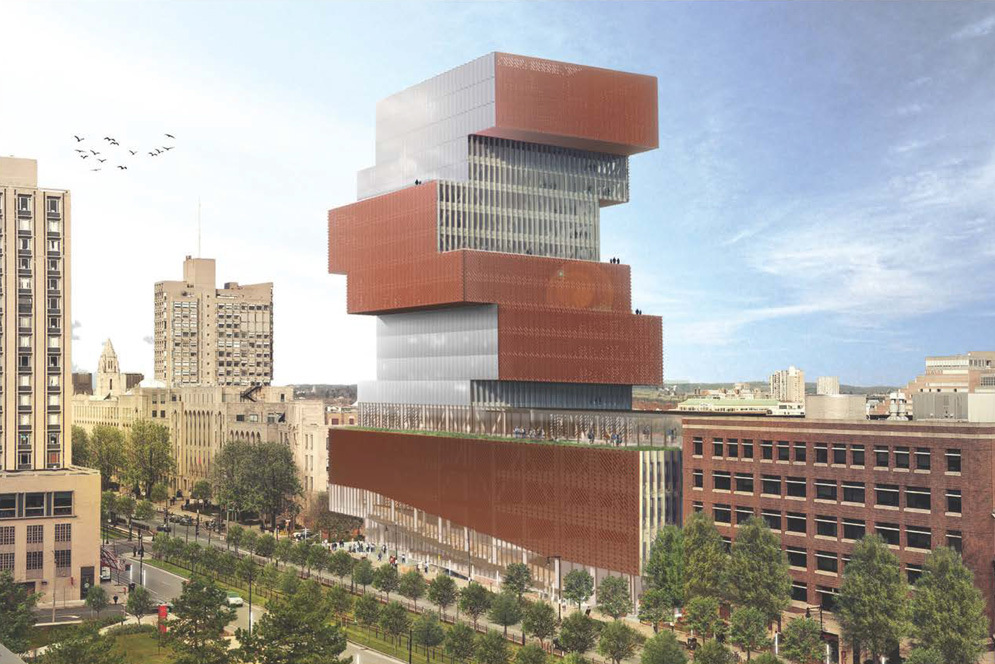 If you think data sciences isn’t the future, look at this artist’s rendering of a 17-story building Boston University is planning on its Commonwealth Avenue campus. It will be the focal point and the tallest structure on campus.

Why Should You Care NH,
By Bob Charest

This I know because my electricity supplier tells me so.

They’ve put this news rather gently into a “Home Energy Report” they’ve sent me today, and I’m not sure how I should take this news.

Do I care that I am using 15 percent more electricity than my “average” neighbors who live within approximately two miles of me? That in the past six months, I used an extra $110 of kilowatt hours than my neighbors?

I suppose this should bother me. I do consider myself thrifty (Some might say a tightwad, but that’s just my brother-in-law speaking.) I consider myself environmentally aware. I don’t want to use more of our natural resources than I have to. I get my furnace tuned up each fall. My thermostat is usually set at 65 during the day. I try to limit my gasoline usage by condensing my stops into one trip out. I don’t leave lights on in a room when I’m not in it.  I don’t jackrabbit away from stoplights, and I carry out what I carry in.

But, dog gone it, it was hot in August and September, which is the time period that is the basis for this report.  I had that AC cranked up so high that I’d walk in my house after weeding the garden or mowing the lawn, and it was pure bliss. I thanked the air conditioning gods profusely. Which I now see was not a deity at all, but Unitil. I was thanking the wrong omnipotent being.

What really bothers me about their report: Why are they telling me this? Why do they know this? More specifically, why are they comparing me to my neighbors? Are they appealing to my competitive side?

I wonder about the motivation behind sending its customers such a letter. After all, I haven’t received anything from my water district telling me I use more water than anybody else in my neighborhood. They have a profit motive in keeping that liquid gold flowing to my home.

Would the cable television company send me a letter telling me I’m watching more TV than my neighbors? I doubt it. Would the internet service provider tell me to cool it on my time online?

I suspect Unitil is monitoring my electricity usage for some purpose. According to their letter, there is even a question that says, “Why does Unitil send these reports?”

Answer: “We want to help you make smart energy decisions and reduce your bills.”

Gee, thanks, Unitil! I do appreciate it anytime someone tries to save me money, but offering me only two tips seems pretty paltry. “Turn off lights when you leave the room” and “Make sure your refrigerator seal is tight” seem like piddling advice. But there on the back side of your notice is, I suspect, your real reason for sending me this note: “Use a virtual home assistant to manage energy.”

So there you have it. The utility company didn’t make any specific recommendations for products in their letter, but obviously they are pushing the new era of smart home products on me, from thermostats that learn my ways to switches that turn on and shut off when I enter and leave the room. Trying to get me to buy something, I see. The old profit motive again.

That sounds innocent enough until you think: If I do install these devices, who has access to this information? I know that if it is connected to the internet, someone can end up getting it. And who would want it? Who will Alexa tell?

Can I expect another letter from Unitil further on down the road after I install these devices? “We see here, Bob, that you spent 6.8 minutes in the bathroom on Oct. 8. Your neighbor across the way spent an average of 4.5 minutes.”

Lest you think paranoia is rearing its ugly head here, think about this tidbit I found online:

“It is predicted that the connected home and building industry will reach $152.5 billion by 2022, with smart buildings topping the list in terms of revenue. This increase in popularity also enables exciting new opportunities for businesses as they shift to a more user-centric and personalized model, expand their revenue streams and develop strategic partnerships.”

How will all this information be processed, and more importantly, monetized?

This is big business, this “data mining.” The point was driven home by my recent alumni magazine from Boston University. The university has announced a 17-story data science center that they will be building smack-dab in the center of the campus on Commonwealth Avenue, standing above everything else. The proposed building has been called everything from “fantastic” to “Jenga-inspired” to “ugly.”

Data science, according to Wikipedia, is “an interdisciplinary field that uses scientific methods, processes, algorithms and systems to extract knowledge and insights from data in various forms, both structured and unstructured, similar to data mining.”

The BU president, in announcing the new building, said, “This is the science that’s going to change the way we behave, driving our behavior for the next 50 or 100 years.”

It will be the first major teaching center on campus in a half century. The demand for these courses is called “explosive,” and the university says that not only is there an increase in students seeking computer science degrees, but people in other majors are recognizing that they need data science training to do many of the jobs of the future.

For a major university to devote that kind of attention to a field of study should make us all sit up and take notice, especially when they expect this field will be driving behavior through much of the next century. What from the year 1918 is still driving our behavior?

That letter I received from Unitil is probably the beginning of many similar “helpful” letters coming our way in the future. I’m tempted to say, God help us all. It will certainly be a brave new world. I suspect we will all be monitored in ways we cannot imagine.