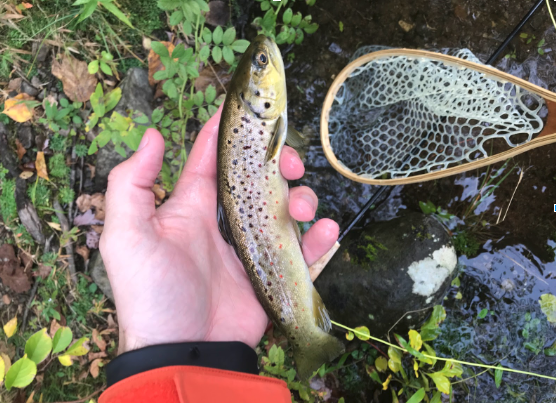 Fishing is said to be not so much about the fishing, as it is about the people that you meet. So, it was a beautiful fall day and there was a little crispness in the air. The trees were the color of Van Gogh’s palette, the sky was blue with the occasional cloud that somehow reminded you that colder weather was on its way. The nice weather prompted more people to be out and about on the trails and the river.

I usually have them all to myself, but today I had to share. I am usually pretty good about sharing, but don’t do so well when it comes to my favorite fishing spots. Being alone on the river gives me the solitude I enjoy to daydream and escape to some other amazing fishing spots. I parked the truck and finished putting my fly rod together and headed down the trail when another fly fisher came up the trail from out of the woods.

We greeted each other and then I asked how he did. He said that he had a good day and had caught a couple of rainbow trout. I then asked what he used for a fly and he said he had been having luck with an Olive Bead Head Wooly Bugger. He wished me luck and off I went. I headed down the trail aways and then into the woods to my favorite spot. As I approached the river, I heard some voices. Two fishermen greeted me as they saw me approach. The customary greetings of  “How did you do and what did you use for a fly” were asked. They both had success, and again using the Olive Bead Head Wooly Bugger.

So I dug into my fly box and found, you guessed it, an Olive Bead Head Wooly Bugger. The only one I had. So I tied it on and began plying the river for takers. I had been fishing for about thirty minutes when I heard a voice call out ”How is the fishing?” I turned around to see two New Hampshire Fish and  Game Wardens standing on the bank. One had the iconic red jacket on, the other officer didn’t. I figured he hadn’t earned his yet.

I told them I hadn’t had any luck. So I waded in to continue our conversation. When I got to shore I said, “You probably want to see my license, I know this since I watch Northwoods Law.” They laughed and asked, “How are we doing?”

The show Northwoods Law has given me even more respect for all that Fish and Game does, plus it is educational and entertaining. Apparently they were looking for some fishermen. They left to continue their search and I headed down the river to try another spot.

As I was fishing,  another voice called out asking how the fishing was. I told him I wasn’t having any luck as of yet. He told me that he had fished this spot a while ago, and that if I went down another ten yards there was a pool that he had some luck with. I thanked him and waded down.

Two casts later I caught a nice twelve inch Rainbow Trout. Two casts later I was into another one. When he saw the net he took off with my last Olive Bead Head Wooly Bugger hanging out of his mouth and not attached to my line. In my haste to catch another fish I forgot to check my knot.

It was getting dark as I headed back to the truck and thought about the people I had met, and I had met some really nice people.