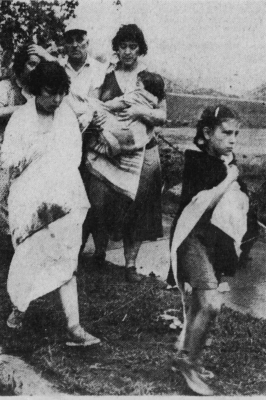 Rep. Marjorie Porter -- My grandfather, Dino Ricardi, is in the back. He must have been around 60. My grandmother, Mary Ricardi, is in front of him, holding her head. I think she must have been 55. Then it's my mother, Marion Dagostino (37) holding me. I was three. My sister Anita (11) is next to my mother, and my sister Barbara (8) is walking in front. It was taken on June 9, 1953, probably around 6 pm. We were walking away from our home, which had been on Pasadena Parkway in Worcester, MA. before the tornado hit. This picture was in newspapers all over the country and the world.

An important family anniversary hit me particularly hard this year, and I am beginning to understand why.

June 9 marked the 65th anniversary of the Worcester tornado. It struck around 4:30 in the afternoon, and for ninety minutes this powerful storm traveled 48 miles, ripping through Worcester and surrounding towns.  It left a swath of death and devastation behind.  Ninety-four people lost their lives, more than a thousand were injured, and four thousand homes and buildings were destroyed.

Our neighborhood took a direct hit. My father’s parents lost their home, and their lives, that day. So did many, many of our neighbors.

The two-family home we shared with my mother’s parents was destroyed—actually turned upside-down.  But somehow we managed to make it out alive–my grandmother, my mother, my two sisters, and me.

My grandfather had gone to the store, and came back to find our home was gone. My father was at work.  He finally found us hours later, after searching all the area hospitals.

There are many family stories about what happened, told over and over as I was growing up.  How my oldest sister—she was 11—somehow knew to take us to the safest spot in the house, while my mother futilely tried to close the garage door.  How a cast iron bathtub missed landing on my middle sister by mere inches. How they couldn’t find me until I opened my eyes, my face was so dirty. How while searching for us for hours, all my father could think of was that he had not kissed my mother goodbye before he went to work that day.

The processing took decades, and we all were marked forever by the trauma we endured, even with a strong and loving family around us. Strong storms frighten us still, and we are always sure to kiss our loved-one goodbye when we leave.

There’s an iconic picture of us walking out of the wreckage which made the front page of newspapers world-wide, and won the photographer a Pulitzer.  It shows my two sisters, ages 8 and 11, bedraggled and wrapped in blankets, walking a bit ahead of my mother, who was clutching me in her arms. I was three. My grandmother is behind us, holding her head, and my grandfather protected us from behind. We are stepping over electrical wires, which, yes, were live.

If you research the tornado of ‘53, as I have, you will most likely see us as we were that day. Several show a close-up of my mother and me, and it’s my mother’s face that has struck me so powerfully this year. She is so young—younger than my daughter is now. Her eyes are looking down, her mouth is set. She has just lost her home, but she has her children with her, and her look tells me she is determined to get them to safety at all cost.

I usually try to avoid talking about national issues when I write for you.  I have no more knowledge of what goes on in Washington than you do.  But it’s that look on my mother’s face that tells me I can’t avoid it this time.

I just keep thinking, what if it weren’t a natural disaster that destroyed our home and our life? What if, instead, it was gang violence, or civil war, or a brutal governmental regime that had made us flee? What if my mother, with her three young daughters, knew what fate awaited us if we got into the hands of violent, hostile armies?

I know by the look in her eyes she would be determined to get us someplace safe. She would have walked miles—hundreds of miles even—to seek asylum for us.

And what if, when she finally reached a place she understood to be safe, suddenly her three daughters were taken from her? Removed to a place unknown, not heard from again for weeks and months, if ever?

And what would have happened to my sisters and me, left to deal with the trauma alone, no loving family to comfort us? How would we have dealt with not knowing when we would see our mother again? Who would rock us when we cried?

The anniversary of the tornado hit me hard this year, and the news from the southern border haunts me. All those mothers, and all those children, who have lost everything and now have lost each other.  Who is there for them? What are their nightmares made of?

I don’t claim to know much about what goes on in Washington, but I do know right from wrong. Separating children from their families is wrong.

Marjorie Porter is serving her fourth term in the NH House, representing the citizens of Antrim, Hillsborough, and Windsor. She sits on the election Law Committee. She has two grown children of whom she is extremely proud. A retired teacher, Marjorie lives in Hillsborough with her husband and three cats.