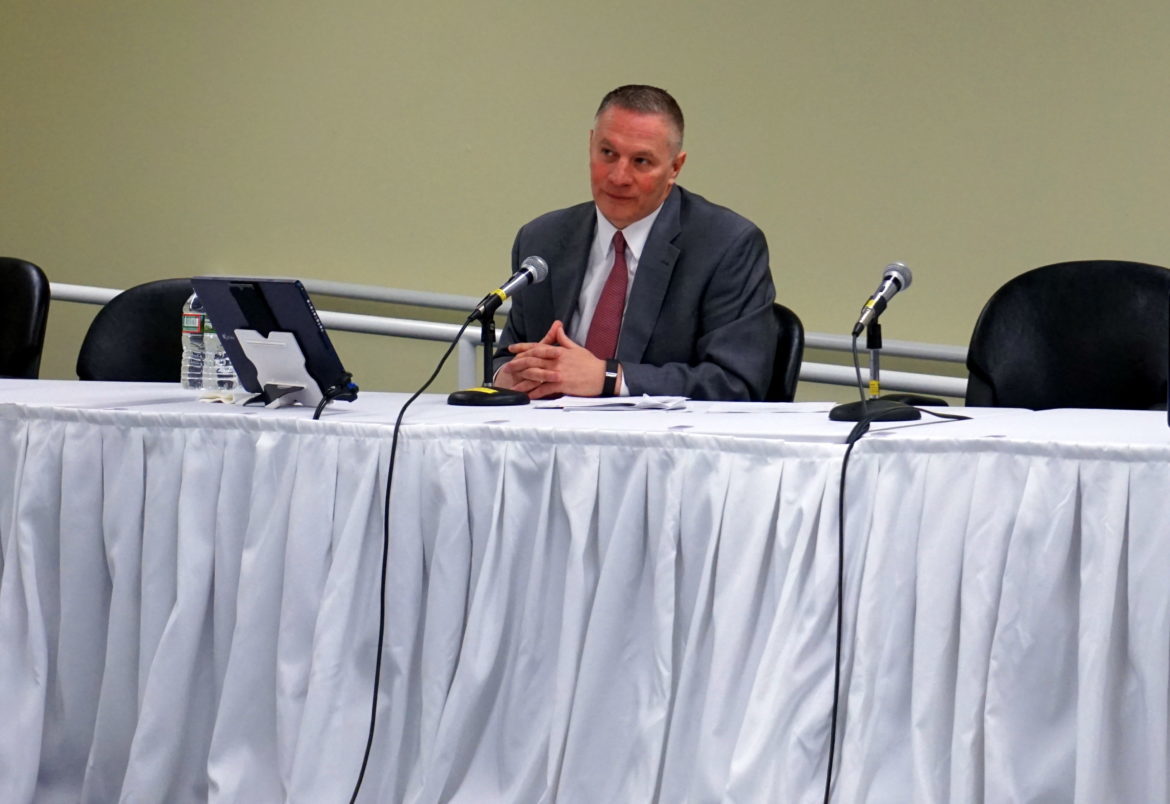 Eversource NH's president William Quinlan testifies at the first hearing before the Site Evaluation Committee in Concord on the Northern Pass project April 13, 2017.

CONCORD — State utility regulators will decide Thursday if they made a mistake denying Northern Pass’s application for a 192-mile, $1.6 billion, high-voltage transmission line from Pittsburg to Deerfield.

In February the Site Evaluation Committee determined Northern Pass failed to meet its burden of proof that it would not unduly interfere with the orderly development of the region, one of four criteria needed to issue a certificate for construction.

The SEC made its determination after 70 adjudicative hearings, hearing from 154 witnesses and receiving and considering 2,176 exhibits. It deliberated on two of the four criteria, but stopped after determining the project failed to meet the standards for orderly development.

However, Northern Pass claims the committee failed to follow the law and its rules to deliberate on all four criteria and to consider conditions that would mitigate its concerns and other crucial evidence.

“The Subcommittee’s vote that theApplicants failed to prove by a preponderance of the evidence that the Project will not unduly interfere with the orderly development of the region is not supported by the record,” wrote Northern Pass attorney Barry Needleman in its motion for reconsideration.

“Accordingly, the Applicants request that the Subcommittee vacate its decision to deny the application and resume its deliberations on all the required statutory and regulatory considerations, including such conditions of approval that may address issues identified in the course of those deliberations and vacate the decision to deny the Application.”

In an earlier motion, Northern Pass offered alternatives in order to meet its burden of proof and mitigate concerns, but in its written ruling the committee rejected the suggestions saying they were made after the adjudicative hearing record was closed.

In its written decision issued March 30, the SEC said several of the expert witnesses were either not credible or assumed the best case scenario which for economic issues made the project appear more beneficial than other testimony indicated.

“The impact on the economy and employment during operations of the project is largely dependent on savings from the wholesale electricity market,” the committee wrote. “The Applicant has not demonstrated that savings from the Capacity Market will occur or if they do occur, that they will be as large as the Applicant’s expert says they would be.”

The committee found Northern Pass’s experts on tourism, property values and land use to not be credible.

But Northern Pass officials argue they presented enough evidence to prove the project would not harm the orderly development of the region.

Project attorneys say one of the reconsideration motion’s purposes is “to sharpen the focus on how certain mitigation elements, based on evidence already in the record, would materially address concerns the Subcommittee expressed during deliberations regarding the Project’s potential impacts on tourism, property values and land use, as well as other issues that may arise pertaining to the other siting criteria.”

Northern Pass says it would meet all the conditions proposed by the Counsel for the Public. The conditions range from construction and environmental parameters to special situations that need to be resolved and upgrading the Coos Loop transmission line.

Project intervenors largely sided with the SEC in its decision to deny the project by opposing reconsideration, but union members and business groups filed motions in support of reconsideration.

In opposing reconsideration, Counsel for the Public said Northern Pass fails to prove the SEC made legal or factual errors in denying the utility’s transmission line application.

“Many of the Applicants’ arguments are based on a continued misapprehension that the Subcommittee made an affirmative finding that the Project would unduly interfere with the orderly development of the region, when the Subcommittee’s actual finding was that Applicants failed to present sufficient credible and reliable evidence to allow the Subcommittee to make the required statutory findings for issuance of a Certificate,” Aslin wrote.

He notes the applicants expect the SEC to propose conditions to mitigate the inadequacies in its presentation, which is not the committee’s responsibility, but rather the applicants’ or other parties to the case.

“The Subcommittee cannot be faulted for failing to consider conditions that were not part of the record and that were not adequately supported by factual evidence in the record,” Aslin writes.

And he said the applicant now proposes the SEC impose conditions that exceed its authority under the law.

Several intervenors supporting reconsideration say if the SEC had continued to deliberate all four criteria, it would have determined project benefits outweigh the concerns.

The SEC issued a 7-0 oral order Feb. 1 and Eversource asked the SEC to reconsider its decision on Feb. 28. The SEC then decided March 13 to suspend its oral order saying it would entertain motions for reconsideration after the written order is issued, which it was March 30.

Deliberations are scheduled to begin at 9 a.m. Thursday at 49 Donovan St. in Concord.

If the SEC is unable to finish deliberating Thursday the members will meet again June 4.

If the SEC denies the reconsideration motion, Eversource has said it would appeal the decision to the state Supreme Court, a process that would take about a year.