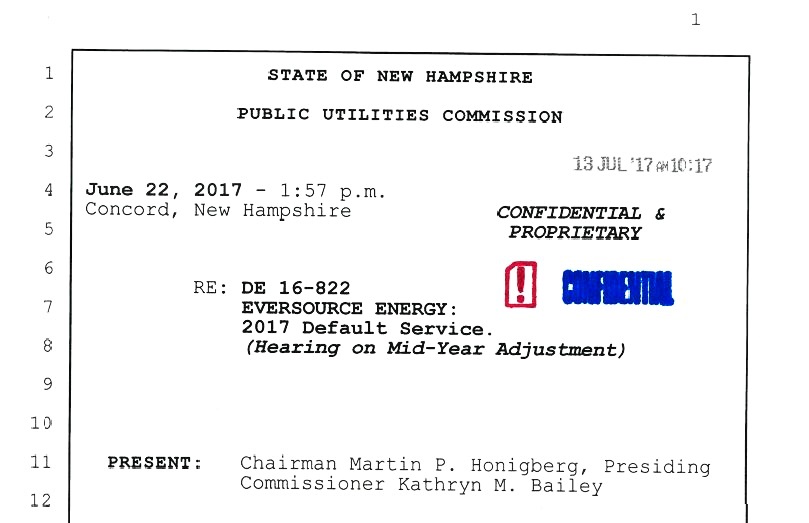 Eversource customers paid $52.3 million more than necessary between November of 2013 and last April due to a controversial contract between the utility and the biomass-burning Burgess BioPower plant in Berlin.

That additional cost, which is being passed along to customers, is projected to grow to $100 million by April of 2020, if not sooner.

The affected customers buy their electricity directly from Eversource. Customers who buy from other suppliers, but are billed through Eversource, are not impacted.
The figures come from Frederick B. White, an Eversource official.

He is quoted in a transcript of a June public hearing that Eversource asked the state’s Public Utilities Commission to keep secret.

The PUC commissioners, Martin Honigberg, Kathryn Bailey and Michael Giaimo, rejected that request, saying the public had the right to that information.
The information was made public late Friday.

That extra-cost payments are allowed under a contract approved in 2011 by three different PUC commissioners.

That 20-year contract means Eversource will buy some electricity from the Berlin biomass plant regardless of how much cheaper it is on the open market, where the utility also gets electricity.

That plant is now owned by Cate Street Capital Holdings Group, according to court records.

Sarah Boone, an official with Cate Street Capital, did not respond to a request for comment on the $100 million limit. However, in an email she said the plant is “by far the cleanest, most efficient biomass generating facility in New Hampshire and its economic and community benefits are very significant.”

In an email Martin Murray, a spokesman for Eversource, wrote: “The testimony is straightforward – our forecast was based on then-current information. We projected that the Fund limit could be met in April, 2020 but noted that it could be earlier or later than that date.”

The $100-million mark is important because it could affect the future of the plant and to some degree the profitability of forestry in the North Country.

Under the contract any payments over $100 million are deducted from the subsequent payments that the plant receives from Eversource. That has the potential to steadily erode its profitability.

In May, Cate Street Capital’s Boone told InDepthNH.org that “should the need arise we will look at all options available to us. Continuing to keep Burgess BioPower successfully operating is of vital importance to Coos County.”

The public’s right to know about a controversial deal

Kreis said the information provided a valuable look at how government functioned when the PUC approved the “contentious” contract.

The plant burns wood chips and advocates, including some state officials and the logging industry, urged approval of the contract, saying it would provide a boost to the economy of the North Country.

Indeed, in May Cate Street Capital’s Boone said since the plant went into full operation in 2014 it has purchased about $40 million in biomass in New Hampshire. That’s about half of the biomass used by the plant.

Those advocates also argued that the plant would provide green energy, although some environmentalists argue burning wood for energy is a poor choice because it is inefficient.

Officials from PSNH argued that the fixed rate could be good for consumers if there was a spike in energy prices.

But the PUC staff – and then Consumer Advocate Meredith Hatfield – said it could also cost consumers millions of dollars, a prediction that is coming true.

The contract was approved by then-PUC commissioners Thomas Getz, Amy Ignatius and Clifton Below. Getz is now employed by a law firm that does work for Eversource; Ignatius is a Superior Court judge and Below works in property management.