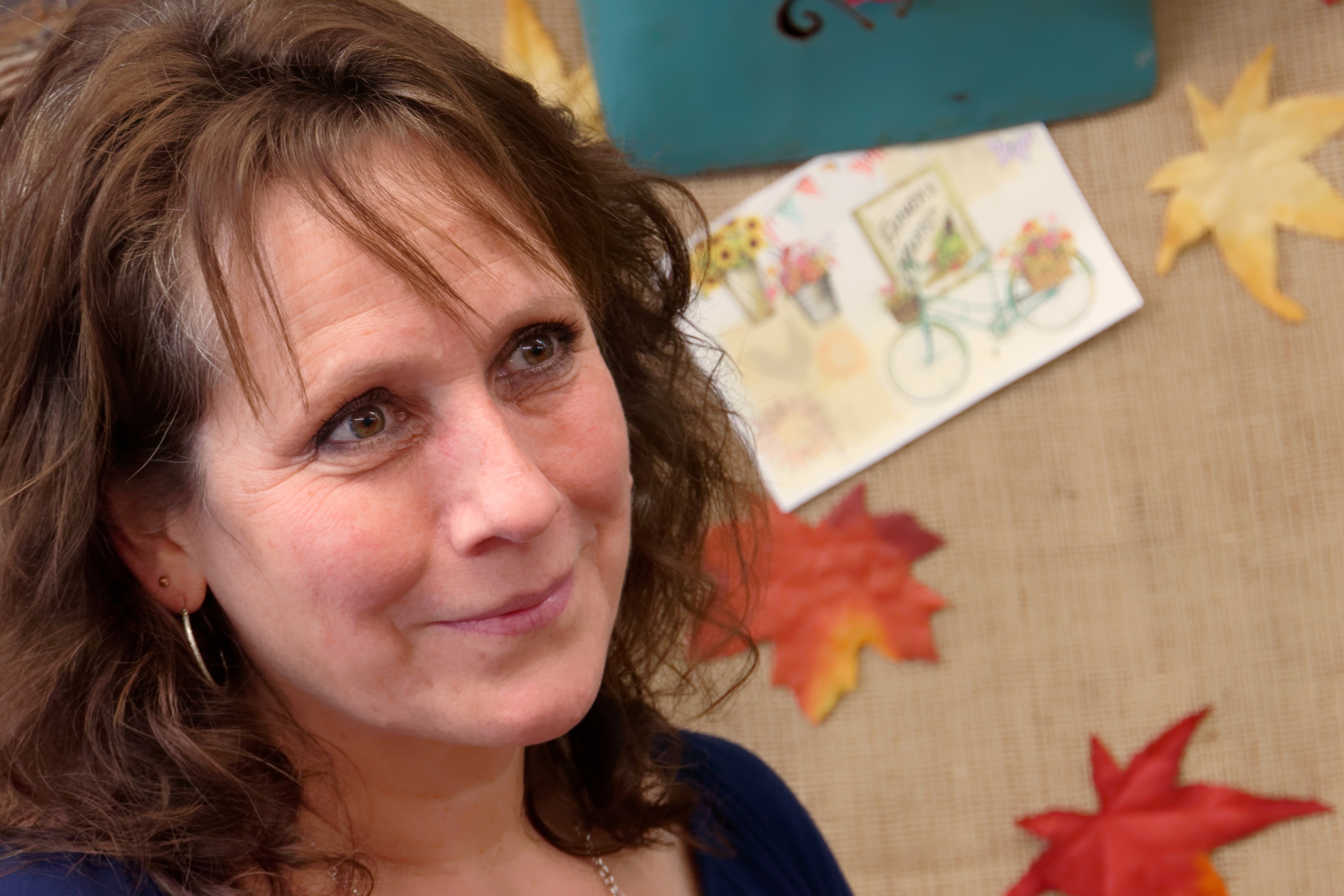 Bring Your Own Business (BYOB): Entrepreneurial Tales From The North Country

This is the fourth in an occasional series on entrepreneurs and innovation in the North Country. If you have a suggestion contact: nancywestnews@gmail.com

COLEBROOK – In 2011, after a lot of thought, Beverly White concluded that the traditional farmers market – much as she loved it – wasn’t helping farmers or locavore consumers as well as it could.

And somewhat daringly she thought she could fix that.

She decided to open a shop where farmers and artisans could drop off their goods. She would sell them, taking a percentage for her efforts. And ideally that would increase the number of locavores, people whose diet consists principally of locally grown or produced food. 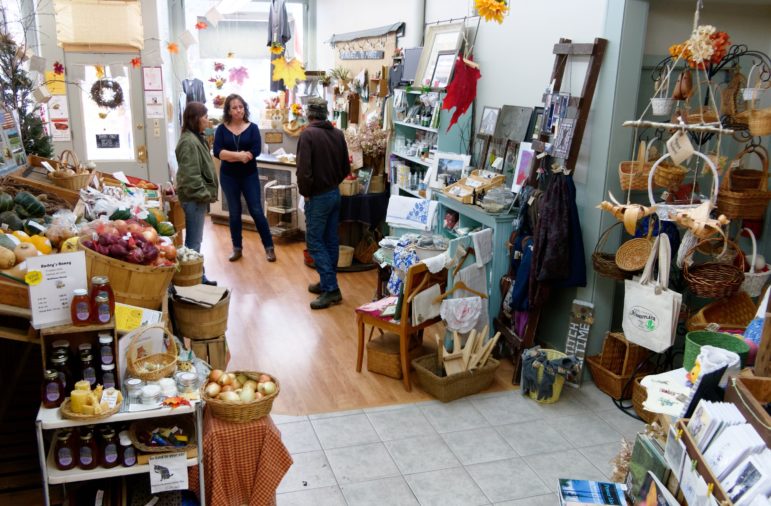 Beverly White thought there had to be a way to help farmers and consumers eager for local food. She is pictured with Robin and Scott Lambert who are among the farmers who regularly bring their goods to White’s store. Chris Jensen photo

The store would be open all week, allowing the farmers to sell more and making it easier for consumers on a tight schedule to buy local goods.

And the store would educate people about the desirability and availability of good, local food.

In 2012 she rented space on a side street and opened the North Country Marketplace. But only a couple of farms signed up and that was worrisome. However, White didn’t dwell on the risk of investing her money and time and failing. 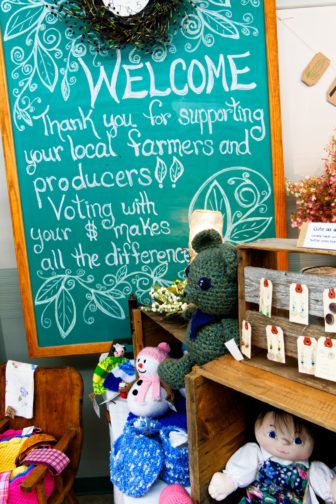 “I’m a rainbows and puppies kind of person,” she said. “I’m very positive or I try to be about anything like that. Just like I tell my older kids if you have something you want to do, go for it because you don’t know unless you try.”

Five years later she’s operating a larger store on Colebrook’s Main Street. About 50 farmers and artisans are selling their goods there. 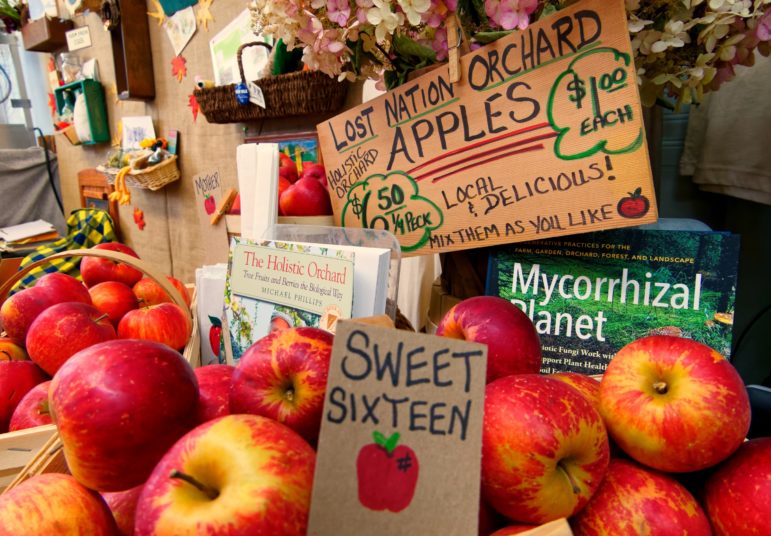 “Her business is extremely important for that whole region to support the growers as well as some of the craft makers,” said Charlene Andersen, the manager of business education at the New Hampshire Community Loan Fund, which helped her hire a consultant to review her business model.

White’s motto is “Locally Grown And Made By Local People” and the store sells items ranging from handmade hats to produce, meat and bakery items. Eggs are the biggest seller.

Robin and Scott Lambert are two of White’s vendors. They own the Wee Little Bits Homestead and provide eggs, jams, jelly, relishes, pickles, chicken, turkey and pork.
And they say the North Country Marketplace has made their lives easier and more profitable.

“It is amazing. It is amazing,” said Robin Lambert. “It means we can focus on all the things that we need to focus on at our home. Bev does all the great leg work for us. We can stay at home and provide the produce.” 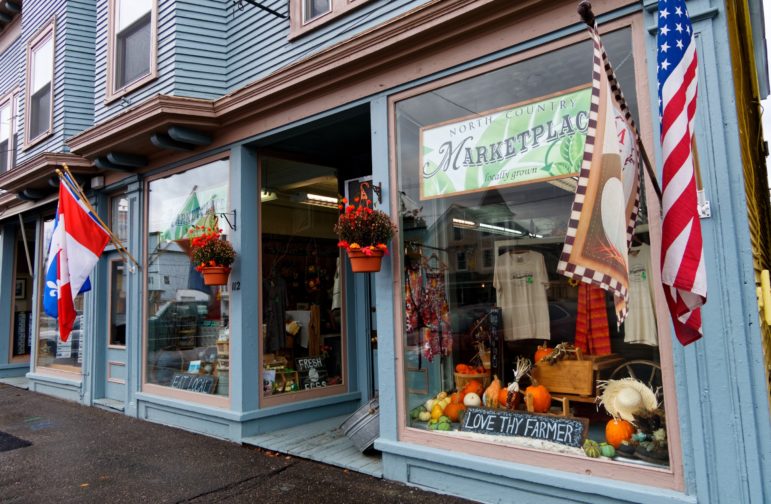 Vendors set their prices and White takes a percentage. She says she’s often surprised to see some prices are lower than commercial operations.

“They don’t get paid for the work they do, really. It is like a labor of love,” White said. During the summer months two- thirds of her customers are summer people or folks traveling through. The others are local.

She said some have suggested that during the winter months she might bolster her inventory by selling produce brought up from Boston. She won’t even consider that. It would, she said, undermine the idea of locally produced.

It’s not clear if White’s store is the first of its kind in the state. But it is certainly in the forefront of locavore retail.

And her concept is lauded by the New Hampshire Farmers Market Association.

“It’s really great and we support that model,” said Wendy Stevens, the president of the association. “If she can increase the income for farmers that’s great for Colebrook.”

BYOB: Rek-Lis: Brewing A New Life In The North Country

BYOB: The Polish Princess of Lancaster

BYOB: In The North Country, An Owner’s Manual For Running A Business

Veteran journalist Chris Jensen covers the North Country for InDepthNH.org and can be reached at christopherjensennh@gmail.com