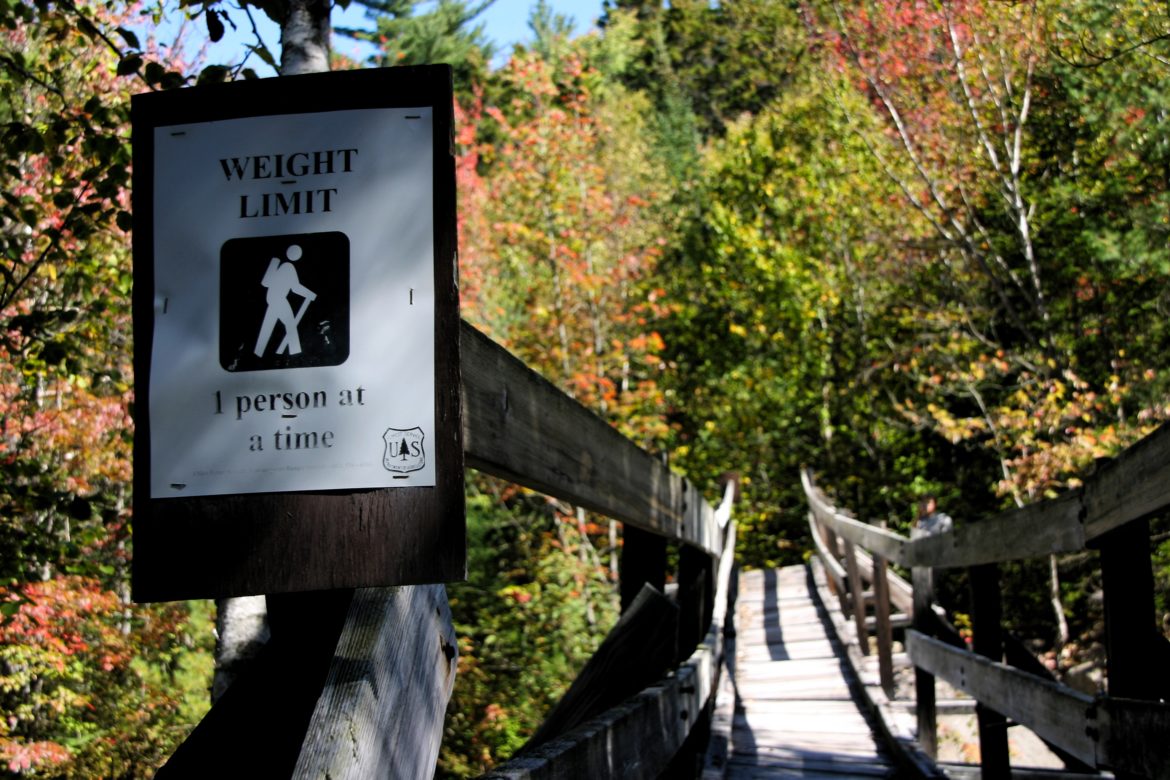 A decision on whether to replace the bridge is scheduled for November. Photo by Chris Jensen

BETHLEHEM – Removing the decrepit Thoreau Falls Bridge in The White Mountain National Forest means “increased risk” to hikers during “during moderate to high flows” and winter travel would be “complicated” by snow and ice.

Those are two of the conclusions of an 18-month study by the U.S. Forest Service, which estimates fewer than 1,000 people travel over the bridge each year, with most during the summer and fall.

For much of the hiking season, the flow of the East Branch of the Pemigewasset wouldn’t be a serious problem and there would be benefits, says the study, released earlier this month.

“Overall this alternative would enhance the wilderness character of the area by removing an unnecessary structure and increasing the opportunities for solitude and primitive forms of recreation,” says the study.

The bridge is located in the Pemigewasset Wilderness Area. It is a six-mile hike from the Lincoln Woods Ranger Station, which is off the Kancamagus Highway. Coming from the other direction, the bridge is almost 10 miles from U.S. Route 302.

The study notes aside from a sudden storm, the water flow is predictably seasonal, with snow melt having a significant impact.

That means summer or fall would be best for crossing and that period coincides with the heaviest traffic.

The forest service has been considering what to do about the bridge since at least 2011. That’s when an engineer said it was too old and had been so weakened by Tropical Storm Irene that it wasn’t safe.

But it has been periodically checked and remained open, posted with a recommendation that only one hiker cross at a time.

In 2015, the Forest Service began considering whether to replace the bridge. It found that it was a controversial subject. Some hikers urged the bridge be removed and not replaced.

They argued that would be the classic wilderness experience intended by Congress. Others noted the risk of crossing in high water.

The agency has not made a final decision, however, and is taking public comments. The deadline is for comments to be received or postmarked is midnight Sept. 5th.

The agency said E-mailed comments should go to comments-eastern-white-mountain-pemigewasset@fs.fed.us. But there are provisions for letters or phone calls.

The decision will be made by Brooke Brown, the Pemigewasset District Ranger. It is expected in November.

The bridge was built in 1962, 22 years before Congress declared the 45,000 acre in which it is located to be a wilderness area.

And, that’s been the problem. Under the federal definition a wilderness area shouldn’t have man-made structure. But the Thoreau Falls Bridge was grandfathered.

It became such a significant issue that in December 2015 the Forest Service took the unusual step of adopting a procedure that requires an in-depth study and allows for more public input.

That now-completed study includes the bridge’s origin, linked to a 1958 Forest Service memo that stated the East Branch was “quite a river to cross.”

But the study also says the memo didn’t mention any incidents, nor could it find other records of crossing-related injuries.