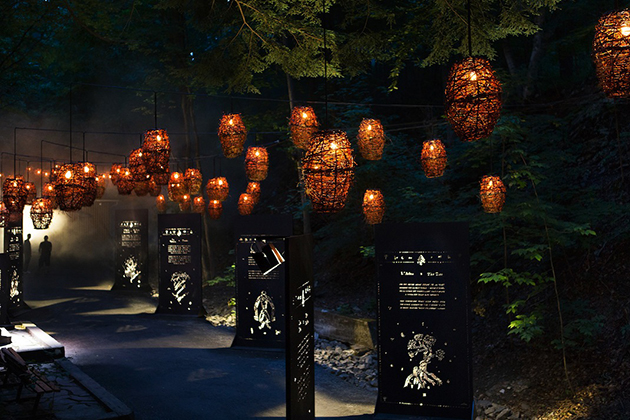 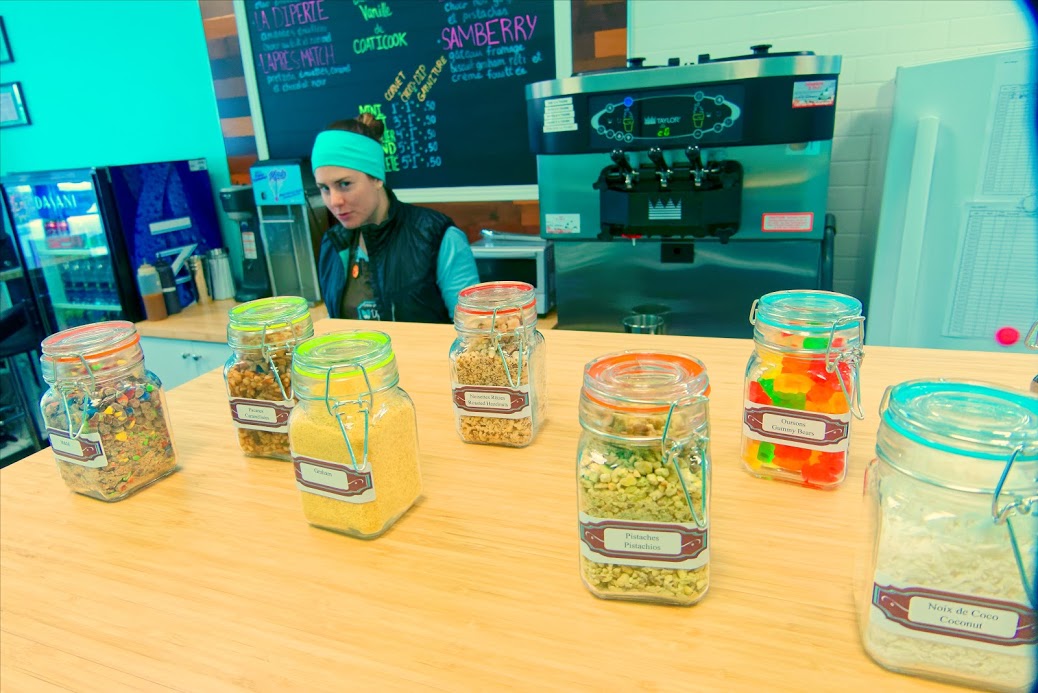 COATICOOK, Quebec – While many small towns dream about the financial security of becoming a tourist attraction, this city of about 9,200 pulled it off. It took an unusual idea, made a $1 million gamble and hit a tourism geyser. 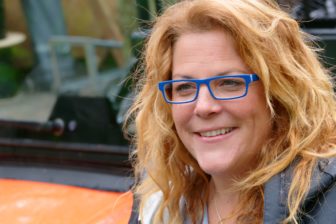 Caroline Sage, the executive director of the Parc de la Gorge, wondered if the forest trails could be turned into a nighttime attraction. Photo by Chris Jensen

In the last three years about 356,000 people have been drawn to tiny Coaticook to pay for a 1.6 mile nighttime stroll through the Foresta Lumina.

They follow a path wired for light and sound and are told a tale that is “inspired by the area’s myths and legends, who draw them into an immersive adventure,” according to Moment Factory, the Montreal firm that created it.

“It has been very, very, very good,” said Mayor Bertrand Lamoureux. The two motels as well as bed and breakfasts are full, the restaurants busy and shops are doing well, he said.

Before Foresta Lumina, Coaticook – located about 180 miles from Concord – existed on forestry, agriculture and a little manufacturing.

There wasn’t much tourism. Some people camped and hiked trails in the Parc de la Gorge or nervously crossed its 554-foot long footbridge over the gorge 160 feet below. Another draw has been the La Laiterie de Coaticook, known for excellent ice cream. 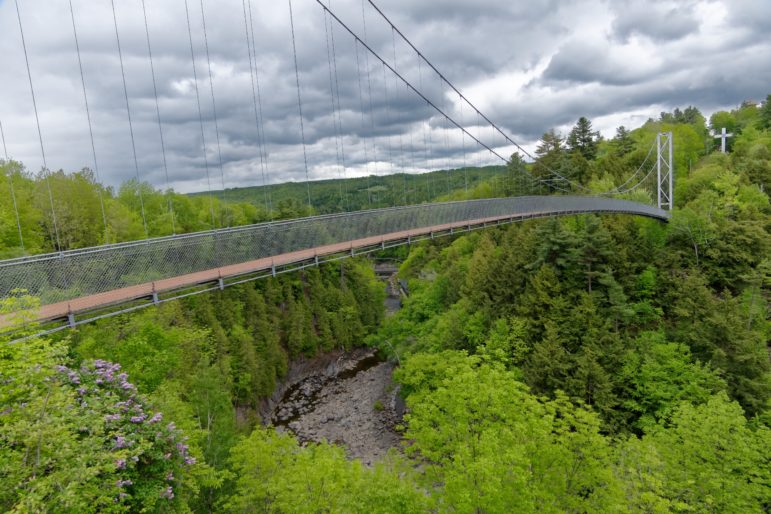 But around 2013, Caroline Sage, the executive director of the non-profit Parc de la Gorge, began to worry.

“We came to the conclusion that the hiking is in decline,” she said. She churned through a lot of ideas and finally settled on one: Could something be done to create an enchanted forest in the Parc de la Gorge?

Its less pretentious motto is: “We Do It In Public.”

The people in Coaticook “were really open to do something different,” said Jonathan St-Onge, the producer of the Moment Factory’s Lumina projects. “And they had the guts to take the risk and push it further and to raise a larger financing, I guess, than they would have imagined.”

That financing worked out to about $1 million. 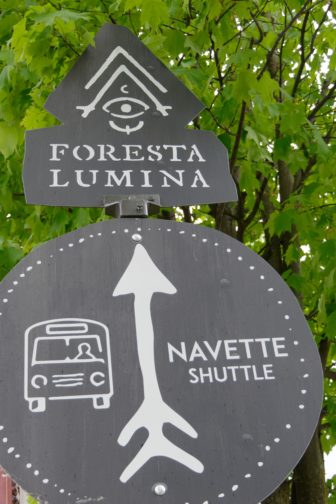 To bring tourists into the business district Coaticook created a shuttle bus and made parking easier downtown than at the Foresta Lumina site. Photo by Chris Jensen.

But there were bigger concerns than the cost, remembered Vincent Tanguay, who was city manager at the time. Coaticook didn’t want to be saddled with the ongoing, long-term expense of a white elephant if it didn’t draw enough tourists.

So, officials were conservative projecting income, Tanguay said. And, to keep costs down Moment Factory was urged to come up with a computerized project that didn’t need people operating every display along the path.

Lamoureux, the mayor, said some people weren’t embarrassed to tell him that the whole thing was crazy. But others thought it could be a good thing for the town and figured it was worth a shot.

And bit by bit Sage’s enthusiasm and persistence caught on and local and regional organizations, including New Hampshire’s Neil and Louise Tillotson Fund and a donor who wished to remain anonymous, came up with the money. 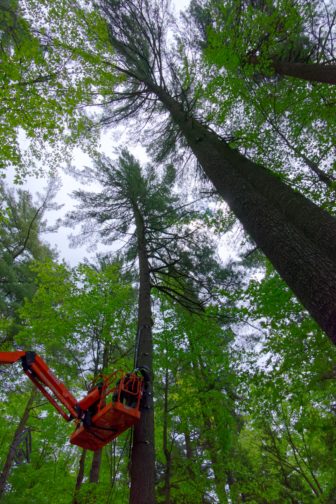 On July 12, 2014, Foresta Lumina was ready to open and Sage was nervous. She’d played a key role in convincing people to take a big chance. She was hoping at least 80 people would buy tickets. That would be face-saving respectable for a first night.
Eighty people showed.

When the gates closed, 800 tickets had been sold.

Through the summer, word spread and the number grew. About 72,000 bought tickets. But the unexpected success brought problems.

Restaurants ran out of food, said Caroline Thibeault, the president of the regional chamber of commerce. They never expected such a crowd.

Those with homes around the Parc de la Gorge didn’t like people parking everywhere. “It was terrible for those people,” said Lamoureux. And many of those tourists who crowded the nearby residential streets went through Foresta Lumina and then drove off, wallets untouched. They never went into Coaticook’s business district.

The solution was to designate a parking area in the business district and provide free shuttles. That encouraged people to have something to eat or shop before or after Foresta Lumina.

Another problem was that the Foresta Lumina didn’t have the organization to handle all those people wanting tickets and information. Some became cranky.

In an August 2014 posting on TripAdvisor a visitor from Montreal complained about the frustrating lack of information and organizational goofs. 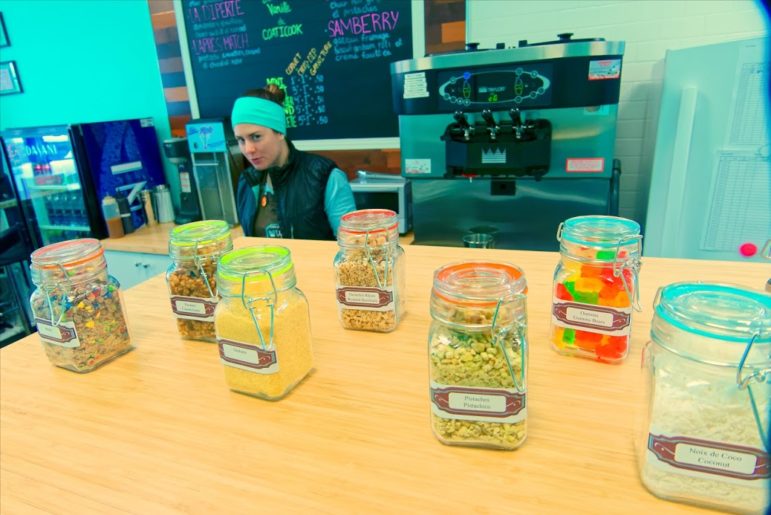 But then he added: “It was absolutely stunning and magical…a totally unique experience. If you love fantasy/fantasy worlds (like Lord of the Rings or Pan’s Labyrinth) you’ll be very happy.”

Foresta Lumina added administrative resources and the number of organizational complaints withered. It now has a “Certificate of Excellence” from TripAdvisor based on so many happy comments.

And it got an unexpected accolade. In 2016 it was given an award from The Themed Entertainment Association for “Outstanding Achievement” for an “Interactive Attraction.”

It was one of 12 such awards worldwide, including a Disney exhibit in Hong Kong. The $1 million Foresta Lumina project was honored in the “Limited Budget” category, which sets the maximum cost at $10 million.

“But we get thrilled when someone takes those tools and makes art out of them and art in a way that people can enjoy in large numbers in an unusual space. It just kind of blew us away,” he said. 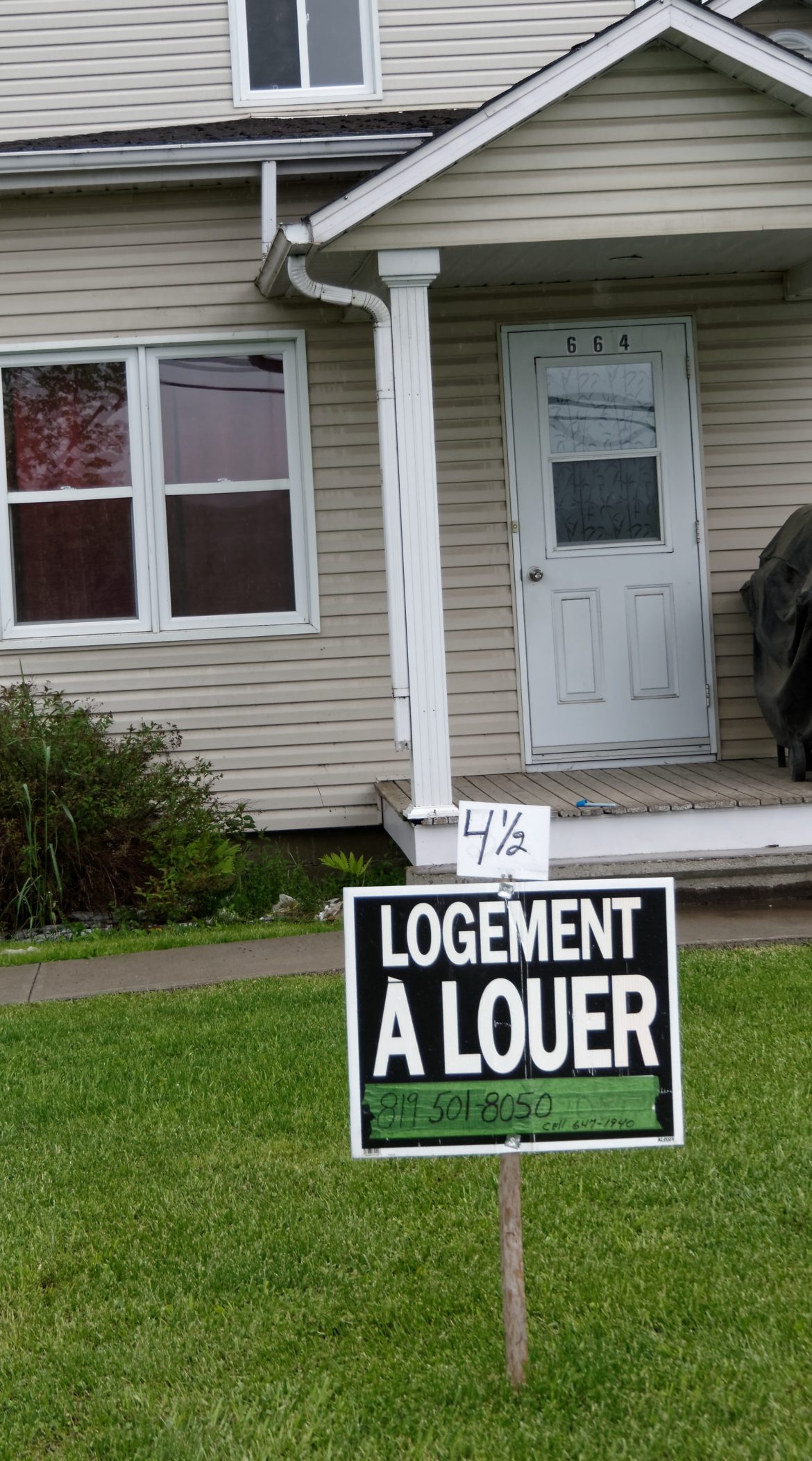 With only two motels – and seeing the need for more lodging – Coaticook is allowing homeowners to rent out rooms, regardless of zoning. Photo by Chris Jensen

And unsurprisingly that’s played an important role in the economic growth of the region, according to a 2016 study. It concluded tourists spent about $48 million (Canadian) in the area in 2015, compared to $11 million in 2001.

Local officials say they don’t have an exact economic impact. But Coaticook businesses have gotten a boost and a robust summer makes it easier to survive the leaner, winter months, said the chamber of commerce’s Thibeault. She says it’s also encouraged some new businesses.

One of those is La Diperie, an ice cream shop on Child Street. Owner Maude Brodeur opened it after seeing all those tourists wandering around and noticing a storefront not far from the Foresta Lumina shuttle bus stop.

Coaticook has only two motels, so to provide more lodging the town allows anyone with a spare room to rent it, regardless of zoning, said Lamoureux, the mayor.

It’s not unusual for small towns to have sometimes vague dreams about becoming a tourist destination, said Mark Okrant, a former tourism professor at Plymouth State University, who now has a consulting business.

But Coaticook made its dream come true.

“It’s a very interesting story. These people obviously have their act together. They have obviously thought things through quite well,” he said.