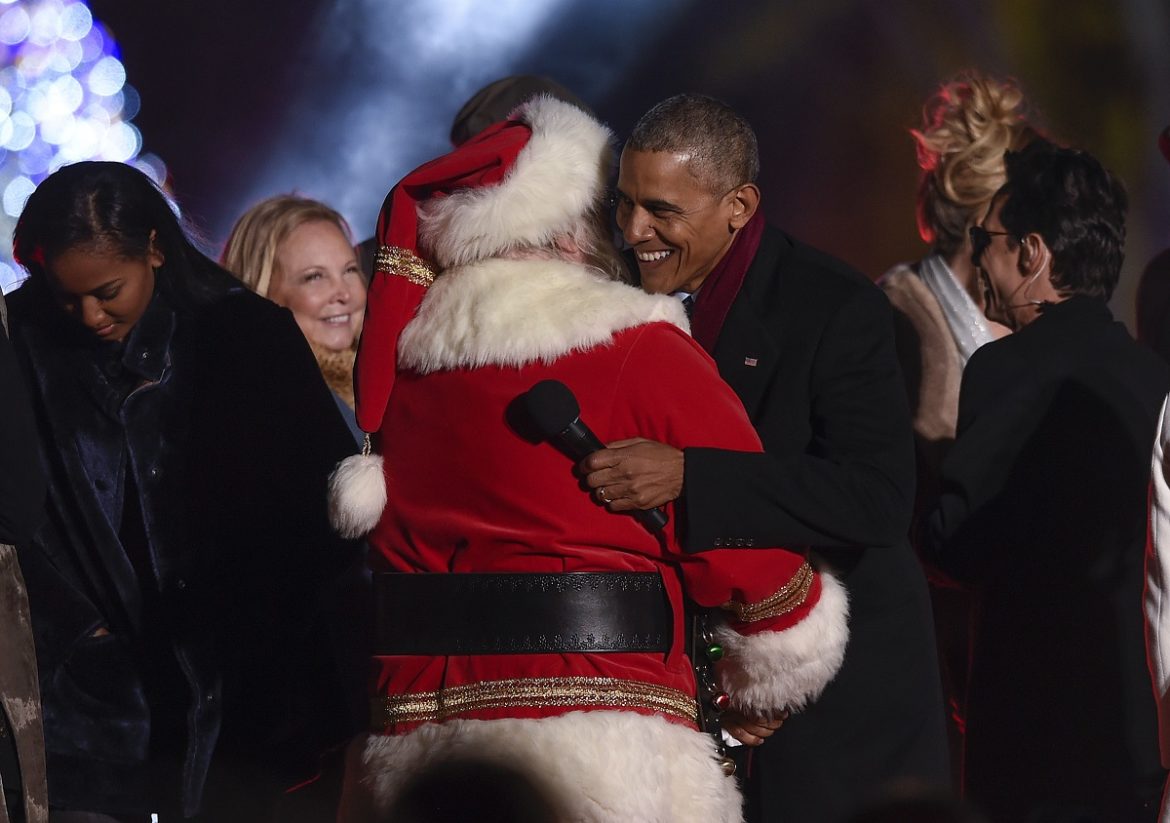 President Barack Obama hugs Santa Claus during the 94th annual lighting of the National Christmas Tree on the Ellipse of the National Mall, In Washington, DC on December 1, 2016 (Photo by Riccardo Savi) *** Please Use Credit from Credit Field ***(Sipa via AP Images)

Boy, has 2016 been a whirlwind adventure. If you’re like us, you have tabs and tabs of unread stories that caught your eye during the workday, but haven’t had time to dive into yet. Now that the holiday break is upon us, we’ll finally have the time to sink into that comfy chair by the fireplace and immerse ourselves in great journalism.

For those of you who haven’t had time to read every word OpenSecrets Blog has published this past year, have no fear! As our holiday gift to you, we’ve compiled our best investigations below in a handy listicle. Enjoy!

In partnership with the Boston Globe’s Spotlight team, we uncovered what may be the largest straw donor scheme ever reported. A small law firm in Boston reimbursed its lawyers with bonus payments for the contributions they made to federal, state and local politicians — more than $1.4 million that we were able to document. Reimbursing individuals for their political donations is generally illegal, since it obscures the true source of the funds. CRP’s investigation spurred at least 20 politicians so far to send almost $600,000 in donations from the firm’s employees to the U.S. Treasury or charity. Federal prosecutors have opened a grand jury investigation.

We attempted to make sense of 2016, the most expensive election on record — with the lower spender winning the White House. Although Hillary Clinton and her allies spent double what team Trump did (though Trump received vast amounts of free media exposure), Clinton’s inordinately high dependence on large donors may have been a sign that she wasn’t connecting with key segments of the electorate. But Trump’s (relatively) low-cost win was an exception to the overall rule: Congressional candidates with the most cash on their side prevailed at a higher rate than in recent past elections. We forecast the federal elections would cost a record-breaking nearly $7 billion.

We followed corporate and lobbyist money to the nominating conventions in Cleveland and Philly (even though the Republicans wouldn’t give us credentials to theirs), pulling back the curtain on the special interest subtext to the schmoozing. While we were there, our designated survivor back home mined DNC documents released by Wikileaks to find that party officials asked the White House to reward some donors with appointments to boards and commissions. As we now know, those documents resulted from what U.S. intelligence officials believe was a Russian government hack of the DNC to help Trump win the election.

And speaking of Russians and Trump, we found a Russian-born oil magnate who made his first-ever political donation…to the real estate tycoon-turned-candidate.Simon Grigorievich Kukes, the former chief executive of a now-defunct Russian oil company once owned by the government, contributed more than $150,000 to Trump’s campaign and joint fundraising committee, Trump Victory.

Still, some of the biggest megadonors around come from the hedge fund industry. We examined some of their firms and showed that the value of their 151 hedge funds is as high as $390 billion, with a majority of these dollars are based overseas, primarily in the Cayman Islands.

Our latest analysis of the correlation between votes and contributions focused on climate change. Turns out that lawmakers who voted for an amendment stating that human activities contribute significantly to climate change received less than one-fifth as much in campaign contributions from the oil & gas and coal industries as those who voted against it.

Sen. John Cornyn (R-Texas) has received the most money from the oil and gas and coal mining industries, over $1.6 million since 2010. (AP Photo/J. Scott Applewhite)

We also continued our unmatched coverage of dark money throughout the year with exclusive, newsbreaking pieces and explainers. We called out Democrats for employing dark money groups despite condemning Republicans for the very same practice: Using our new FCC tracker, our reporters uncovered the advertising campaign of a group that does not have to disclose its donors or necessarily report political spending to the FEC. And we found a group that actuallyadmitted to the IRS that it had spent too much on political activity.

Earlier this year, we found that more than half of ads run in Senate races weren’t reported to the FEC, with nondisclosing political nonprofits such as the Chamber of Commerce, the League of Conservation Voters and Americans for Prosperity tweaking the language just slightly to make them so-called “issue ads.”

We even tried detailing some dark money tricks using a lighter touch. Skeptical of dark money humor? It’s amusing, we promise (still, can’t hurt to have a cup of eggnog when you take this on).

One of our biggest dark dollar moments came when we broke the story that the IRS granted nonprofit status to Karl Rove’s group after five years in limbo. Read about how it happened. (Our story caused the New York Times to lash out with an editorial titled “Karl Rove Bamboozles the I.R.S.”) The shadowy giant Crossroads GPS reported $114 million in political spending in its first four years, and dodged reporting millions more. Conversely, GPS’s new incarnation, One Nation, went from reporting no revenue to bringing in more than $10 million in 2015.

We also called out some of the other creative, or long-winded, ways donors tried to hide their tracks, with trails of sketchy-seeming LLCs.

Our top-notch coverage of scam PACs continued, as we showed how these PACs’ treasurers take donations primarily to benefit their own interests.

Once Donald Trump was elected and began naming his Cabinet picks, we dug around to see what these men and women have been doing with their money when it comes to politics.
For example, our potential new Education secretary, Betsy DeVos, and her relatives have given at least $20.2 million to Republican political groups and candidates since 1989. We broke down the most interesting donations and foundations for you, but also published our data so you can play with it as well.

The funding histories of nominees who have been on the receiving end of the cash chase — current or former elected officials like Ryan Zinke, Rick Perry and Tom Price — are equally worth examining, we showed.

We continued delving into the personal finances of our lawmakers, showing that 24 members of Congress held stock in Gilead Sciences, the manufacturer of lifesaving hepatitis C drug Sovaldi. Gilead came under fire for its sky-high prices for patients, many of whom are victims of the epidemic of opiod abuse. Glad someone benefited from the price hike.

Along with all this great journalism, the Center for Responsive Politics created some new tools to help other reporters and the public dive deep themselves. One helps track ad buys more easily. While the FCC’s website has data on these, it isn’t standardized, isn’t searchable in any useful way and contains gaping holes. Our tool allows you to search by group, candidate, zip code or station, with links to the original purchase contracts for the air time.

We also created a new site and tool to help bring transparency to groups that don’t disclose their donors, with data visualizations to explain the complexities of how money travels so the source can remain hidden. We also now provide downloadable financial information for more than 20,000 nonprofits, thanks to a partnership with Guidestar. You can now unravel normally obscured connections by, for instance, comparing vendors and board members across groups to find the links.

Finally, we have taken over two projects from the Sunlight Foundation: Political Party Time, to help track candidates’ fundraising events, and one that tracks lobbyists for foreign interests trying to influence our government. The former is now accepting uploads of invitations — please contribute to this crowdsourcing effort! The latter is coming soon. Thanks to Sunlight for building these and keeping them going for so long.

Next year, we’ll have a new administration that is already proving to be rife with potential conflicts of interest. We hope our reporting inspires you, and our new resources help you hold our government officials accountable. Happy holidays from OpenSecrets!