It was an action in the city Mandan that was unauthorized and it was disturbing. And I wanted to make sure I knew where and what I was going to in the future. 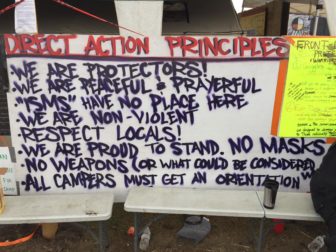 Signs detail what is expected of people who are considered “protectors.” (Lincoln Soldati photo)

One elder addressed us about a new way of thinking about Thanksgiving. His words were words of inclusion and love, of moving beyond the past. I felt such humility and honor to there.

I can tell you without hesitation this is one Thanksgiving I will never forget, and will always be thankful for.

Soldati is not a Native American, but his wife Kathleen’s great-grandmother was from the Rosebud Reservation, also a Sioux tribe in South Dakota.