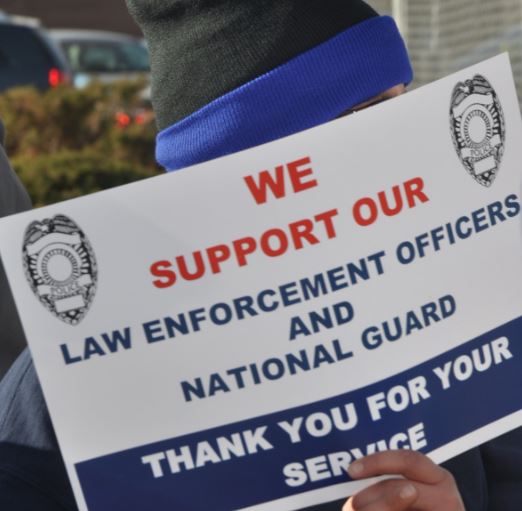 Opposition demonstrators had gathered as well at the action in Bismarck on Friday..

As I awoke from a somewhat restless sleep, I was surprised to find morning had arrived so soon.  After stashing my sleeping bag, pads, and pillow in my car, I wandered over to the white dome for the daily briefing.

Typically these are divided between recent arrivals for an orientation and those who’ve been here for at least a few days.  Previously, these have consisted of soliciting input from those gathered for comment on the previous day’s actions, and then for announcements for the day.

The announcements vary day to day depending on what is needed — help with construction, winterization, women’s meetings, actions if any that are planned for the day.

During the comment period, several people spoke of the action in the city of Mandan that took place the day before. Many people were not pleased about what happened. I myself had gone to the action with the intention of participating; however I quickly realized that this was not what I had signed up for.  I made the decision to leave and was joined in that decision by the two young people I had driven to Mandan.

We later learned the action in Mandan had not been approved by the elders.

The focus today was an action to take place in Bismarck, about an hour’s drive north of the camp.  The action was to take place in the Kirkwood Mall, and more specifically, Target, a retailer known to be unsympathetic to the interests of the Water Action of the Water Protectors from Standing Rock.

The plan was to have everyone drive separately (in small groups) to the Kirkwood Mall in Bismarck and then gather in front of Target at 12:30.  The action was to consist of a prayer circle, with concentric circles on the outside. Those choosing to be on the outside were cautioned that they would likely be arrested.

I chose to leave early to get a lay of the land and assess the options surrounding the scene of the intended action.  To be honest, after my experience the day before, I was still wrestling with what role I should choose to play. 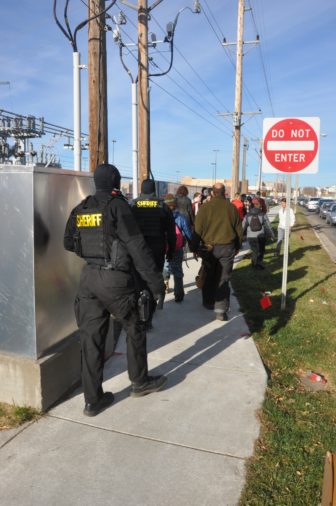 Sheriff’s deputies follow group of people at the action in Bismarck on Nov. 25. (Lincoln Soldati photo)

While I wasn’t particularly concerned with getting arrested, I was still trying to decide if doing so would benefit the cause or simply be an act of hubris on my part, somehow earning my “street cred.”

Ultimately, I opted for the role of observer.  I still have much to learn and when I decide to risk arrest I want to know I am doing so for reasons other than my own self-absorption.

As I waited, observing all of the Black Friday shoppers going about their holiday shopping, I began to notice police and security gathering.  Most had bundles of white plastic handcuff ties strapped to their belts.  They were clearly not looking to engage in a discussion with the water protectors from Standing Rock.

And they obviously knew we were coming.  In the morning briefing, we were told that in the room with us were infiltrators and that the police would know what our plans were.  I knew then they were right.

I encountered a few I recognized from the morning gathering.  None of us knew exactly what was going on.  Twelve-thirty came and went and the “flash mob” was nowhere to be seen.  Several minutes passed and suddenly waves of police began moving briskly toward the Target entrance.  Many shoppers, too, began to gravitate toward the entrance wondering what was going on.  I followed and watched. Almost instantaneously, the police began grabbing people and pushing against the prayer circle.

Those in the center were seated and began a prayer, then a chant.  The police were relentless and told everyone to move out or be arrested.

The shoppers were also told to move back. Many had their cell phones out and were recording the event.  Some of those filming were warned that their phones would be confiscated for evidence.  It didn’t appear that anyone stopped filming and no phones were taken.

Most of the police were professional, but determined.  One sergeant, however, was very boisterous and aggressive.  He was the exception and was the least effective.  Some in the crowd shouted “Water is Life,” which is a frequent chant of the water protectors.  Others shouted epithets at those in the circle and urged support for law enforcement.  Everything happened very quickly.

Within 10 to 15 minutes, the area was clear.  Those who were not arrested made their way outside.

I made my way outside, retrieved my camera from my car and located a group from the camp walking along a sidewalk on the outside of the mall.

At an intersection, a small group of opposition demonstrators gathered on an opposite corner.  Some carried flags and signs urging support for law enforcement. Sheriff’s deputies escorted the camp group as they proceeded past the demonstrators.

I heard one of the deputies talking to a small group from the camp. He was polite and respectful, urging them to return to their cars.  They did and it was over.

There were about 100 people from the camp who participated.  I later learned from a local news report that 33 had been arrested.

I am learning every day.  www.ocetisakowincamp.org