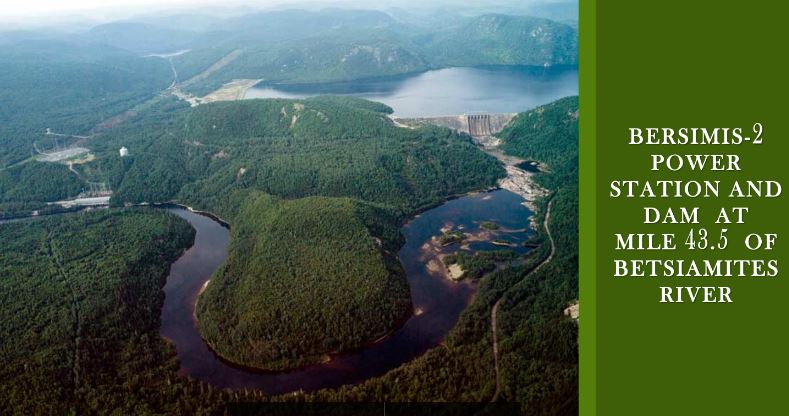 Photo is from a presentation the Pessamit Innu gave at Plymouth State University in September called “An Indefensible Privilege: Wiping Out Salmon in the Betsiamites River to Light up Cities" of a dam and hydroelectric station built by Hydro-Quebec.

Northern Pass has objected to a late-filed motion by the Pessamit Innu First Nation of Quebec to intervene to fight the controversial 192-mile transmission line proposed to run from Pittsburg to Deerfield.

Northern Pass says the Pessamit Innu, with 4,000 members who live on a reservation 390 miles northeast of Montreal, haven’t shown that their substantial interests would be affected by the state Site Evaluation Committee proceedings as required.

The Pessamit Innu also haven’t shown that intervening would be in the interests of justice, according to the Northern Pass objection filed on Friday by Thomas Getz of the law firm McLane Middleton.

“Moreover, to the extent that Pessamit has any justiciable claims, they are beyond the jurisdiction of the New Hampshire Site Evaluation Committee,” Getz wrote.

The objection also referenced how the Pessamit filed a motion for declaratory judgment in the Québec Superior Court, which has been pending since February 1998. That case claims damages against the government of Canada, the government of Québec, and Hydro-Québec, and seeks a permanent injunction against Hydro-Québec to stop construction or operation of any new installations on Pessamit Innu territory, the objection states.

Louis Archambault, a biologist and consultant who represents the Pessamit Innu, said Monday the objection raises a number of questions he hopes to legally resolve. Archambault wants to find out what recourse the Pessamit Innu have to what he says are factual inaccuracies in Northern Pass’ objection.

Archambault said the lawsuits referenced in the objection that the Pessamit Innu filed against the government and Hydro-Quebec are longstanding and have nothing to do with the fight to stop Northern Pass.

“This fight is to save the salmon on the Betsiamites River,” Archambault said.

If Northern Pass isn’t stopped, the salmon on the river will be extinct in a matter of a few years, he said.

The bigger legal battle with Hydro-Quebec and the government is on hold simply because the Pessamit Innu cannot afford to fight the court battle right now, Archambault said.

“We now are only focusing on the very, very important problem of the survival of the salmon, although it is the tip of the iceberg,” Archambault said. He said Northern Pass mixed those legal fights in their objection to confuse people.

Settling the court battle with the government and Hydro-Quebec that predated Northern Pass would be great, but there is plenty of time later, he said.  “If there is a settlement in five years fine, but for the salmon it is impossible to wait. We have to do something now or be responsible for the extinction of the salmon,” Archambault said.

Pessamit Innu First Nation has no money to hire a lawyer to fight Northern Pass, only learned they could intervene recently and face a language barrier in getting their message out, Archambault said.

“We are not fighting to have a treaty or be compensated. We are fighting to save the river. We are very close to a minute before midnight,” Archambault said.

Northern Pass says the Pessamit Innu are nine months beyond the deadline to file to intervene and the evaluation committee must make its decision by Sept. 30, 2017.

“Pessamit bases its intervention on international rights and conventions, effects of existing Hydro-Québec facilities on lands in northern Canada, and salmon survival in the Northern hemisphere. The attenuated claims that Pessamit makes are beyond the jurisdiction of the Subcommittee and whether such claims have any merit are determinations to be made elsewhere,” Getz wrote.

Northern Pass is seeking approval to build a high voltage transmission line with associated facilities to bring 1,090 megawatts of hydroelectric power from Hydro-Quebec in Canada through New Hampshire and on to New England.

There is a great deal of opposition to the proposal along the Northern Pass route, but Eversource Energy and Northern Pass, the filers of the joint application, insist it will provide clean energy that will reduce electric rates and create jobs. Opponents say the jobs will be short-lived and the savings minimal, but insist the project will seriously impact tourism and real estate sales.

The Site Evaluation Committee must make its decision by Sept. 30, 2017, and the complex legal proceedings are still ongoing. Next in the process, intervenors will file their expert testimony and make their experts available for questioning by Northern Pass.

“Pessamit argues, among other things, that Hydro-Québec illegitimately acquired capacity to Pessamit’s detriment, that there will be undeclared impacts on its territory, and that there will be devastating impacts on the river downstream from existing Hydro-Québec power stations. The harms that Pessamit alleges, however, are historic in nature, related to past actions taken in Canada, and there is no factual basis for concluding that the issuance of a Certificate in this proceeding would cause harm to Pessamit.

“As for the impact on salmon, Pessamit provides no factual basis for its claim and such claims, even to the extent they were at all related to the siting, construction and operation of the Project, are general in nature and fail to satisfy the requirement that petitions to intervene demonstrate how the party will be directly affected by the SEC’s decision,” Getz wrote.

“The SEC simply does not have the authority to adjudicate issues regarding Hydro-Québec’s operations in Canada, and its decision to issue a Certiftcate of Site and Facility for the Project will not affect Pessamit’s rights or interests,” Getz wrote.