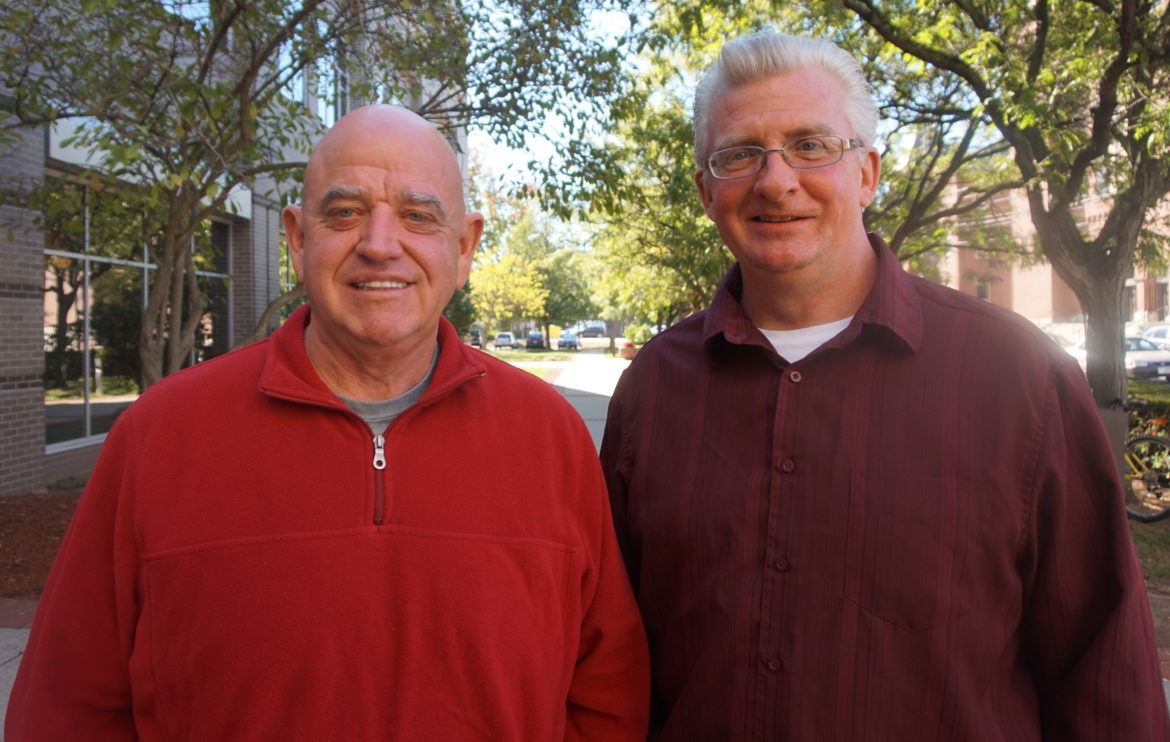 Eric Largy, right, is pictured with his uncle Dan Largy Thursday after criminal charges against Eric were dropped in connection with the alleged assault on his father Clifton Largy seven years ago. The photo was taken outside Hillsborough County Superior Court South in Nashua.

NASHUA — A judge dropped criminal charges against Eric Largy on Thursday in connection with the alleged beating seven years ago of his father, retired Nashua Police Chief Clifton Largy.

Judge Charles S. Temple told Eric Largy that the law only allows him to dismiss the charges “without prejudice,” which means they could be refiled again in the future. Temple said he hopes prosecutors will not do so.

“My hope as a judge is while I’m constrained by the statute in terms of the nature of this dismissal is that after seven years, this case is over for you at this point,” Temple said at the hearing in Hillsborough County Superior Court South in Nashua.

Largy, 49, was locked up for most of the seven and a half years after the April 22, 2009, incident even though the original two first-degree assault and kidnapping charges were dropped. He was jailed for 18 months awaiting trial after the incident, then deemed incompetent to stand trial, and involuntarily committed for five and a half years to the state prison’s Secure Psychiatric Unit.

Largy, who insists he is not mentally ill, refused treatment during much of the time he was in the state’s custody. He was described as a “perfect gentleman” by Dr. Daniel Potenza, medical director of forensic services at the Department of Corrections.

The criminal charges were reinstated in May and in July, Largy was discharged from the New Hampshire Hospital, shortly after being transferred there from Secure Psychiatric Unit. Largy has been free on personal recognizance bail and was ordered to undergo another competency evaluation.

Temple said he dismissed the case because the most recent competency evaluation found Largy was not competent to stand trial and not restorable, adding that Largy is also not dangerous.

Temple took note of the fact that Eric’s uncle, Dan Largy, was in court supporting Eric after being estranged from him – as was the rest of the family – during his years in state custody.

“My hope for you now and your family is that you can heal and recover from not only the episode with your dad, but the seven years that you had between your bail detention and the civil commitment,” Temple said. “I hope you can live a constructive, fruitful and meaningful life.”

Largy said in the past that he was defending himself that day from an abusive father, allegations that Clifton Largy denied. The senior Largy previously told InDepthNH.org that Eric lured him to Eric’s residence and attacked him from behind.

Published reports at the time said police accused Largy of beating his father and restraining him with duct tape in an antique barber’s chair for 12 hours. Clifton Largy suffered fractured facial bones and other non-life-threatening injuries.

Clifton Largy couldn’t be reached for comment after the hearing.

His brother, Dan Largy, who owns Collins Brothers Chowder Co., a restaurant in Nashua, attended the hearing and said the family wants to move forward.

“I think we’re all glad that it’s all over with,” Dan Largy said. “I think Eric right now wants to get on with his life.  I think my brother Cliff would like to see what’s best for Eric. Seven years is a long time.”

Dan Largy spoke fondly about Eric having always been a helpful member of the family as the two left the courtroom. Dan teared up talking about the past.

“Eric is part of our family,” Dan said. “We love Eric and we just want the best for him.”

Eric Largy’s good nature and tendency to help others, especially weaker patients and inmates at the Secure Psychiatric Unit, were consistently mentioned by four psychiatrists who testified at Largy’s recommittal hearings in Merrimack County Probate Court.

Such recommittal hearings are generally closed to the public, but Largy decided to open them to InDepthNH.org because he was frustrated with the system.

She supported dismissing the criminal charges. ”I think that’s the remedy at this point,” Battaglia said.

When asked if Clifton Largy supported dismissing the case, Battaglia said: “I had Mr. (Clifton) Largy’s input all along and that’s what I’ll say about that.”

Largy had been diagnosed with delusional disorder.  One of the state’s motions to recommit him restated Dr. Nicholas Petrou’s original reasons why he believed Largy should be found incompetent to stand trial.

Largy had been insistent that his father pulled strings in his case to deprive him of a criminal trial in which Largy planned to testify that he was defending himself.

“Dr. (Nicholas) Petrou stated that Mr. Largy’s delusional and paranoid beliefs and preoccupations about his father and the legal system were so pervasive that they would likely cause Mr. Largy to make decisions based upon a paranoid and distorted understanding.

“Hopefully this is the end of it. Come on,” Stewart said. “I would say that it was a misguided decision to prosecute him a second time after seven and a half years.”

Largy has been speaking out publicly about his treatment at the Secure Psychiatric Unit, which is run by the Department of Corrections. The unit has come under fire by state Rep. Renny Cushing, D-Hampton, and advocates for the mentally ill for housing mentally ill people who haven’t committed a crime at the unit with convicted criminals.

They have sought a federal investigation into the state prison’s Secure Psychiatric Unit.

“I feel pretty good,” Eric Largy said after the hearing. “I was glad the judge dismissed all the charges, but I’ve gone through this before and it hasn’t sunk in yet. On the record, I don’t have a lot of trust in the system.”

Earlier this year, the state sought to have Largy recommitted for another five years arguing he was mentally ill and dangerous. Probate Court Judge David King denied the petition, finding that Largy posed no danger and discharged him in July.

Largy’s attorney for the criminal proceedings, Public Defender Michael Davidow, said: “The Court’s decision to dismiss this case is a welcome one, as it allows Mr. Largy to resume his work and family relationships without further delay.

“These past years have been hard for all concerned, though, and whether Mr. Largy was treated appropriately while in the state’s custody remains an open question.”