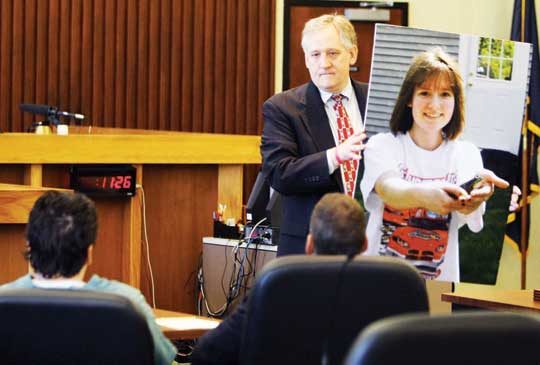 The state Supreme Court ruled on Thursday that records about murder victim Lizzi Marriott’s past sexual history will remain under seal, but left open the possibility that it will be discussed publicly in oral arguments during the convicted killer’s appeal.

Seth Mazzaglia is appealing his conviction in the rape and murder of Marriott, who was a 19-year-old University of New Hampshire sophomore at the time. Mazzaglia claims a Superior Court judge denied him a fair trial by sealing details of Marriott’s sexual history.

The trial court ruled at the time of Mazzaglia’s trial that evidence of Marriott’s interest in certain sexual practices was inadmissible, according to the Supreme Court’s order.

While U.S. Sen. Jeanne Shaheen, D-NH, Gov. Maggie Hassan and victim advocates applauded the ruling, Mazzaglia’s appellate defender Christopher Johnson viewed it as more of an interim order. Johnson said the ruling made it clear that oral arguments in Mazzaglia’s appeal will be open to the public.

And to vigorously argue why the lower court was wrong to seal records of Marriott’s sexual history, the now sealed details will very likely be discussed during oral arguments in Mazzaglia’s appeal to the Supreme Court, Johnson said.

“I don’t see anything in the order that says we have to self-censor or inhibit our arguments,” Johnson said.

He is not trying to embarrass or harm anyone, Johnson said, in seeking to make the information public.

“There’s no salacious or nefarious motivation,” Johnson said. “What I want for my client and all my clients is the marvelously fair and thorough appellate process that Americans are rightly proud of.”

UPDATED: Senior Assistant Attorney General Peter Hinckley returned a call requesting comment on Friday. He disagreed with Johnson. Since the underlying issues are sealed, Hinckley said, the details of Marriott’s sexual history cannot be discussed during oral arguments, which have not yet been scheduled.

“It is my understanding that the lawyers are not allowed to discuss it or they could be in violation of the court’s order,” Hinckley said, to which Johnson said he “respectfully disagrees.”

Gov. Hassan issued a news release saying the Supreme Court order “reaffirms the longstanding recognition under New Hampshire law that rape victims have a fundamental right to privacy about their personal sexual history. …

“By upholding the intent and spirit of New Hampshire’s rape shield law, the Supreme Court avoided a precedent that would have had a potentially devastating impact on victims and their families. My heart continues to go out to the Marriott family, who has endured a loss beyond comprehension, as they continue to pursue justice for Lizzi.”

Sen. Shaheen also issued a news release: “Today’s ruling by the New Hampshire Supreme Court upholds our Rape Shield Law’s basic privacy protections that encourage survivors to report their assault and cooperate with prosecution. I am glad that the court agrees survivors of sexual assault have a basic right to privacy, including their past sexual history.”

Mazzaglia is serving life in prison without parole for murdering Marriott, of Westborough, Mass., on Oct. 9, 2012, in Dover. Published reports of the trial say Mazzaglia’s former girlfriend Kathryn McDonough testified that Mazzaglia strangled Marriott after she said no to his sexual advances.

McDonough said she left the room and when she returned saw Mazzaglia raping Marriott’s body, according to published reports of the trial.

Mazzaglia’s defense blamed McDonough for Marriott’s murder and said she cut a deal with prosecutors to testify against him.  McDonough was released in July after pleading guilty to lying about Marriott’s disappearance and serving three years in prison. Marriott’s body, which was reportedly dumped in the Piscataqua River, has never been found.

Amanda Grady Sexton of the New Hampshire Coalition Against Domestic and Sexual Violence, was quoted by the Associated Press about the Supreme Court’s ruling: “We are pleased that the court upheld the well-established right of rape victims to not have their prior sexual history used against them. This is a victory for not just the Marriotts, but for all victims of sexual assault.”

The Supreme Court had previously ruled that the sealed portions outlining Marriott’s past sexual history would be made public during the appeals process because of a new administrative rule that went into effect in January. But the court stayed its order to give the state and Marriott’s family a chance to appeal.

“Having considered the oral arguments, briefs, and the applicable law, we hereby order that the records sealed by the trial court shall remain sealed and that the parties’ unredacted appellate briefs and appendices shall remain confidential,” the Court’s latest order said.

In the next sentence, however, the Supreme Court said: “Oral argument on the defendant’s direct appeal of his convictions shall be open to the public.”

Johnson said: “This order doesn’t really explain why they came to this decision. That leads me to think this order reflects an interim decision on their part.”

Hinckley had asked that oral arguments in Mazzaglia’s appeal be held behind closed doors.

During arguments on Sept. 21, Hinckley called the sealed records “private and untrue allegations which have been found by the trial court to be irrelevant and inadmissible and should remain so at this time.”