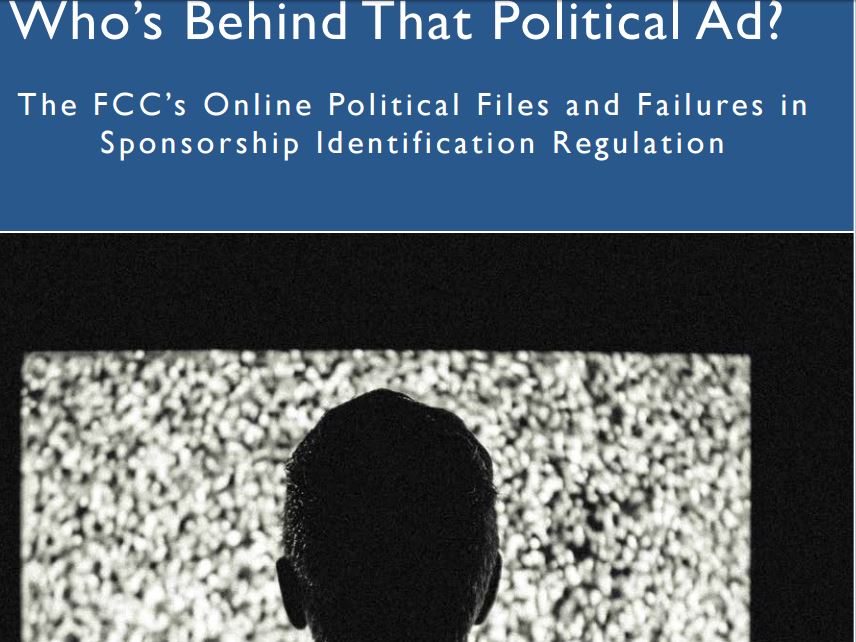 The current filing system is “pretty useless” for the public, according to a new study by the Campaign Legal Center, which put out a report on the system’s shortcomings this week.

Four years after it began requiring TV stations to upload their records of political ad sales to a central government website, the Federal Communications Commission maintains a recordkeeping system that makes finding out who an ad’s sponsor is feel like a treasure hunt.

In 2012, the FCC approved a rule requiring broadcast stations in the largest markets to upload the files showing who bought time for political ads, how much they paid and other details, saving journalists and others from having to visit individual TV stations to get the info. The directive was gradually expanded and now includes most broadcast, cable, satellite and radio outlets.

But the victory for open government turned out to be a website that is searchable only by station call letters, channel number, facility ID number and similar data — not by sponsoring group, candidate mentioned and other terms that would make it easier to track who is running ads in particular federal races, and how much they’re spending.

The current filing system is “pretty useless” for the public, said Meredith McGehee, policy director at the Campaign Legal Center, which put out a report on the system’s shortcomings this week.

Earlier this month, the Center for Responsive Politics launched an ad data tracking tool searchable by state and zip code (and soon, by other terms) to continue efforts started by watchdog groups and news outlets such as Sunlight Foundation and ProPublica when the data first came out.

But the federal agency responsible for the data still maintains only a vague “due diligence” standard when it comes to stations’ responsibility for ensuring the forms contain complete and accurate information.

How it shouldn’t work

Here’s an example: This particular ad-buy record of the National Rifle Association of America – Institute for Legislative Action — a 501(c)(4) that does not disclose its donors — from a Pennsylvania CBS affiliate, WHP-TV, is a short, casual thread of emails titled “NETWORK BUY.”

The WHP-TV email thread seems like a version of a contract document as it shows dates and times of ads to be aired, but it doesn’t include any information on the amount charged for the broadcast time, contrary to the law.

Under the Section 315 of the Communications Act, all broadcasters have to maintain a complete record of requests to purchase air time that includes ad buyer and content information. Forms drawn up by the National Association of Broadcasters usually contain the same information. Contracts and invoices generally detail dates and times ads were aired and amount paid to purchase broadcast time.

Most stations use the NAB form — but not all. And beyond that, there is absolutely no standardization in filing.

According to a Campaign Legal Center consultant’s analysis of the whole archive, broadcasters nationwide were using about 80 different forms to report the same type of information, making it difficult for anyone to sort the information.

It doesn’t look like change is coming soon. Asked whether the FCC is building a standardized filing system for ad buy information, an agency spokesperson replied it is looking into the costs and benefits of making the political files machine-readable and machine-searchable.

Under the current system, ads don’t have unique identification numbers, making it extremely difficult to match ads seen or heard on TV or radio to corresponding purchase records.

The NAB form for its buy from WHP-TV lists “National Rifle Association of America–Institute for Legislative Action” where it should have identified specific issues referenced in the ad.

With thousands of ad clips uploaded on YouTube by the NRA in the last few months, it is impossible to match the NAB form and the email contract with a specific ad.

An examination of the records shows this isn’t unusual. In fact, count yourself lucky if you find any responses to questions asking for candidates names, issues the ad may mention or names of the sponsoring organizations’ board members.

For instance, this NAB form shows that the conservative 501(c)(4) nonprofit One Nation has purchased TV time for “a message relating to any political matter of national importance,” but the document is missing required information on what the ad is about.

According to Campaign Legal Center’s report, several stations have also incorrectly labeled ads as not “of national importance” when the contrary was true.

In June 2015, multiple broadcasters in Wisconsin, including ABC affiliate WBAY-TV, CBS affiliate WFRB and Fox affiliate WLUK aired ads from the U.S. Chamber of Commerce in support of Ron Johnson’s Senate race. The corresponding NAB form, on the other ad, fails to say the ad is a “matter of national importance.”

Not only does the federal law clearly require broadcasters to identify ads that target any election to federal office, the NAB form kindly reminds filers to mark a communication “a message relating to any political matters of national importance” if the ad references “legally qualified federal candidate,” “any election to Federal office” or a “national legislative issue of public importance.”

Campaign Legal Center was able to confirm this was a false filing only after checking with the Chamber of Commerce itself, something that would be extremely difficult for an individual to do; super PACs and 501(c) groups often don’t reveal their contact information to the public.

Last month, conservative dark money group One Nation spent about $1 million on airing an ad against the Obama administration’s Medicare overhaul across Missouri, including Kansas City, St. Louis and Columbia.

While Kansas City station KMBC clearly marked the program as a message relating to a political matters of national importance and listed Sen. Roy Blunt (R-Mo.) as the target of the ad on its NAB form, Columbia’s NBC affiliate KOMU and St. Louis’ Fox affiliate KTVI left the boxes empty.

Ad buyer information reported for One Nation ads are even more baffling. Several One Nation documents show that either broadcast stations or ad buying agents have been mixing up the nonprofit group One Nation with One Nation PAC, which has no relation to One Nation and has purchased no ads in 2016.

In this particular ad purchase record for WMUR in New Hampshire from last month, the contract document lists One Nation PAC as the advertiser but the NAB Form identifies One Nation as the organization that will use the broadcast time.

The contract lists One Nation PAC as the advertiser.

The NAB form lists One Nation as the organization to use the broadcast time.

As similar as they sound, there’s an important difference between the two. One Nation is a tax-exempt 501(c)(4) nonprofit that has a legal privilege to keep its donors secret. One Nation PAC, on the other hand, is a Carey Committee, a hybrid that can contribute to candidates as well as make independent expenditures. But the PAC must disclose its donors.

Vermont’s WCAX consistently lists One Nation as the advertiser in all its documents; but it uploaded all its One Nation filings under a folder named One Nation PAC on the FCC website.

WCAX General Sales Manager Nick Hasenecz, who files the reports for the station, told OpenSecrets Blog he wasn’t aware that the political action committee and the nonprofit group were separate entities. The station changed the folder’s name to One Nation after the conversation with OpenSecrets Blog.

But WMUR and WCAX aren’t alone in mixing up the two groups.

Because the database isn’t sortable, it’s difficult to check the whole archive, but an analysis shows that at least 10 different stations have listed One Nation and One Nation PAC interchangeably on their NAB forms, records of requests and contracts.

“The reason for this [missing and inaccurate information] is that the stations feel absolutely no pressure to fill in all the required information accurately,” McGehee said.

Under current rules, broadcast licensees have the sole burden of “due diligence” to report complete and accurate information. But because of the lack of precise definition for “due diligence,” stations can simply say they “asked” sponsors or ad-buying agencies for missing information but failed to get an answer.

An FCC spokesman said the agency conducts periodic audits to ensure compliance with its rules and also reviews complaints filed with the FCC.

The agency usually issues warnings to stations that have failed to comply with the rules. Last month, a Florida radio station WQBQ (AM) was fined $15,000 by the FCC for failing to include required information in a public file.

When the Campaign Legal Center and Sunlight Foundation filed complaints against TV stations in 2014, the FCC responded immediately with letters of inquiry to each of the stations and issued a statement claiming to take the matters seriously. However, the complaints still have not been resolved.

“It seems reasonable to assume that FCC is not making reasonable effort to provide the important information to the public,” McGehee said.

The devil’s in the details

McGehee said easy access to accurate political ad buy information is especially critical since the Citizens United decision in 2010 because sometimes that’s the only way to track huge amounts of dark money spending in elections.

Federal Election Commission rules allow 501(c) groups to spend millions without disclosing their activities to the agency as long as the ads run more than 30 days before a primary or 60 days before a general election. Political nonprofits havedeliberately avoided spending within the window to avoid filing reports with the FEC.

One Nation’s ad buy records compiled by the Center for Responsive Politics show that the dark money group has spent tens of millions of dollars already this election — a fact that can be partially gleaned from its website.

One Nation has already spent at least $25 million in 2016, but the FEC’s database shows its outlays as a little over $200,000, because it only began reporting its spending to that agency two weeks ago.

The Campaign Legal Center, along with Common Cause, the Sunlight Foundation and the Benton Foundation, filed more complaints this week against several broadcasters across the nation that have failed to comply with the rules by leaving out important information or reporting false information on their political ad records.

In its new report, CLC called for building a machine-readable standardized filing system, updating the “due diligence” definition to clarify the responsibilities of broadcasters and requiring ad sponsors, under penalty of perjury to provide media outlets with accurate information.