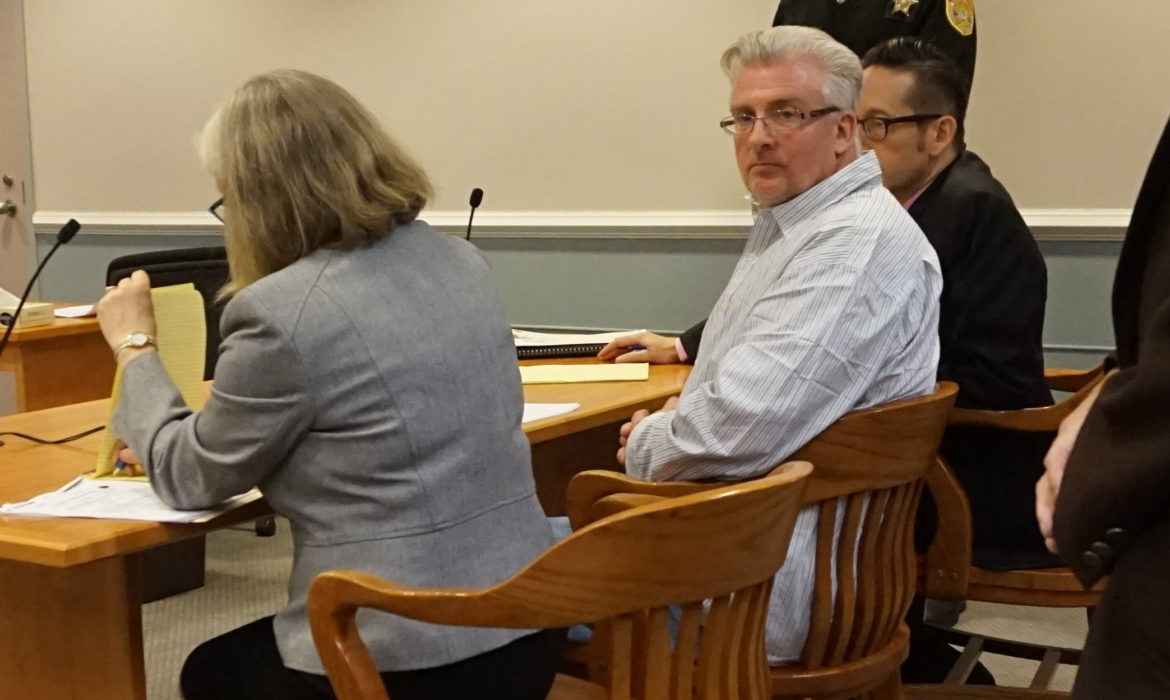 After being locked up for seven years, Eric Largy was arraigned Friday on the same charges that were previously dropped in the alleged beating of his father, retired Nashua Police Chief Clifton Largy.

Judge Charles S. Temple set Eric Largy’s bail at $100,000 cash on two counts of first-degree assault and one charge of kidnapping in the April 22, 2009, attack on Clifton Largy in Nashua.

Judge Temple made it clear that he doesn’t want Largy sent to Valley Street Jail to be “warehoused” until trial. Temple also questioned where the case is going.

“The Court strongly recommends that Mr. Largy remain hospitalized at New Hampshire Hospital until he is discharged from that facility,” Temple wrote.

Temple said he would immediately review the bail order if Largy is taken to Valley Street Jail instead of the state’s psychiatric hospital because of the criminal charges.

Largy, 49, was held for almost two years in Valley Street Jail and for five and a half years on a civil involuntary commitment to the Secure Psychiatric Unit at state prison after being found incompetent to stand trial on the same criminal charges.

“I’m concerned about where we are in terms of what is actually going to be accomplished in this case,” Temple said.

Largy was recently transferred from the Secure Psychiatric Unit to the New Hampshire Hospital after Probate Judge David King denied the state’s request to involuntarily commit Largy for another five years. King’s order paved the way for Largy’s release from the psychiatric hospital in the next two months.

“If this process is simply going to repeat the competency process and end up exactly where we were in April of 2012 when Judge (Jacalyn) Colburn dismissed the case without prejudice, I am not sure why we are spinning those wheels,” Temple said. “But that’s not for me to consider at this point.”

“He duct-taped his arms, put a blanket over his father’s head and tortured him for nearly 12 hours,” Gill said.

Clifton Largy suffered broken eye sockets and a broken jaw, according to press reports at the time.

“He’s already served the amount of time one of those charges would result in,” Ketteridge said.

Gill told the judge: “I would argue, your honor, that he hasn’t been incarcerated. He’s been civilly committed because of mental health issues and dangerousness he poses to the community.”

“The defendant should be treated just as any other defendant who is similarly situated. This crime was so heinous that in itself justifies a high cash bail,” Gill said.

She also asked Temple to place a no-contact order as part of the bail conditions that Largy stay away from his parents, Nancy and Clifton Largy, and Donna Largy and Daniel Largy, which he did.

Gill said it was her understanding that Eric Largy would be absolutely discharged from the hospital and sent to Valley Street Jail to await trial.

Ketteridge said Largy is on nine different medications after having heart surgery in November. She also said he believes his civil rights were violated because he was given no notice of Friday’s bail hearing.

“There was no time to review any of the documents that might have lent more weight to the arguments,” Ketteridge said, adding defendants have a right to call witnesses at bail hearings.

Temple told Largy that if his attorneys asked for a second bail hearing “based on the fact that this was a secret indictment …. I will allow them to do that out of fairness to you.”

Temple said the doctors who testified in the recent civil hearings in Probate Court said Largy is mentally ill and still presents a substantial likelihood of danger to himself and others.

On May 15, Probate Judge David King issued an order that said Largy shouldn’t face a “life sentence” in civil commitments in connection with the assault on his father, noting Eric was never convicted of the crime.

At the Secure Psychiatric Unit, Eric Largy initially told treatment providers that it was self-defense, but stopped when it became clear they didn’t believe him, according to testimony at the previous Probate hearings. Eric Largy insists he is not mentally ill.

Judge King wrote in the May 15 Probate order:  “Surely a lifetime commitment for a 2010 assault charge, which has not resulted in a conviction, is not how the courts can be expected to treat someone because he has a mental illness, absent clear and convincing evidence of present dangerousness.”

King said there’s no question an altercation occurred that day.

“(Eric Largy) has been deprived of his liberty since then, first at the Valley Street Jail, where he spent approximately two years, and then at the Secure Psychiatric Unit at the state prison (SPU) for a five-year period,” King wrote.

Several psychiatrists testified at the earlier civil hearings that Largy suffers from delusional disorder based on his insistence that he was the victim of child abuse at the hands of his father and his belief that his father used his political connections to interfere with his case, which his father also denies.

The delusional disorder diagnosis prompted the courts to first find Largy was incompetent to stand trial, and then formed the basis for his first involuntary commitment for five years to the Secure Psychiatric Unit.