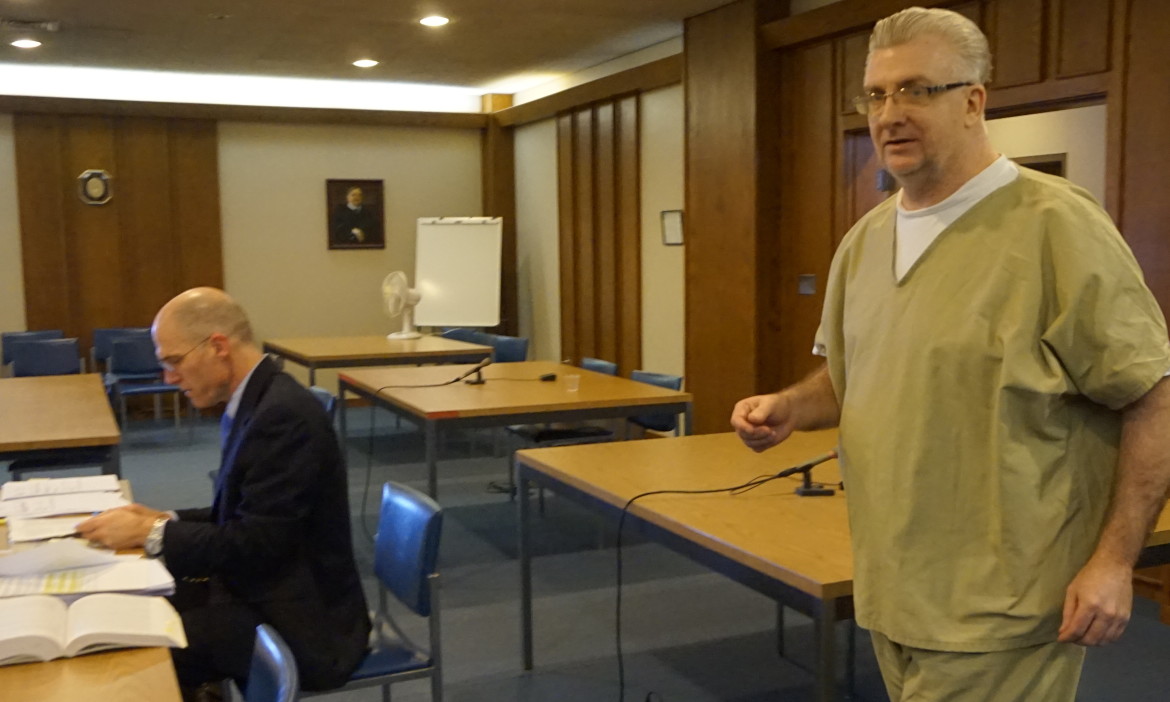 Eric Largy, right, is pictured with his attorney Shane Stewart of Concord at Largy's recommittal hearing in March at Merrimack County Probate Court.

Eric Largy has been transferred to the New Hampshire Hospital in Concord and could be released as soon as May 15 when his involuntary commitment expires unless the state again seeks to renew it.

Largy, 49, had been locked up for five years at the Secure Psychiatric Unit at the State Prison for Men in Concord after he was deemed not competent to stand trial for allegedly beating his father, retired Nashua Police Chief Clifton Largy, on April 22, 2009.

Before that, Largy was held for two years at the Valley Street Jail in Manchester awaiting trial. His lawyer Shane Stewart of Concord confirmed Largy’s transfer.

“I’m extremely happy that he is at the New Hampshire Hospital, that they finally transferred him,” Stewart said on Monday.

Largy was originally charged with first-degree assault and kidnapping for allegedly torturing his father for 12 hours while restraining him in an antique barber chair after luring his father to his home in Nashua.

Those charges were dropped after Largy was involuntarily committed to the Secure Psychiatric Unit, but they could be reinstated any time until the statute of limitations runs out on April 2, 2018.

Largy recently spoke out in an exclusive interview with InDepthNH.org. Largy allowed InDepthNH.org to review some of his confidential files.

Largy told police and treatment providers early on that he was defending himself that day from an abusive father. Largy also said then and continues to be convinced that his father used his connections to interfere with his case, allegations the senior Largy adamantly denied.

Attempts to reach Clifton Largy for comment on his son’s transfer were unsuccessful, but he did speak last week with InDepthNH.org. A woman who answered the phone at his listed number on Monday said he “has no comment.”

When told Eric has been transferred to the less restrictive New Hampshire Hospital, she said the senior Largy was aware of the move, adding “the attorney general called.”

In an interview last week, the senior Largy said his son’s allegations of abuse and domestic violence growing up were not true. The father suffered broken eye sockets and a broken jaw during the incident seven years ago.

Last week, Clifton Largy said of Eric: “If that’s what he thinks, I can’t help him. As far as I’m concerned, I did everything I could for both my sons.” The senior Largy said he hopes the state will do whatever is in the best interest of his son and the public.

“There was no self-defense. None. It was a plot and he hit me from behind,” Mr. Largy said. “I guess he should be ready to go to court and go to trial.”

“I’m not being paranoid,” said Largy during a recent interview at the Secure Psychiatric Unit. “This is a pattern of behavior that I have seen going on in law enforcement in my case.”

The Secure Psychiatric Unit is the most secure facility for mentally ill people in New Hampshire, houses mostly convicted criminals and is run by the Department of Corrections.  It is on the grounds of the state prison and staffed by corrections officers and a medical staff.

The Secure Psychiatric Unit has come under fire for housing together patients who haven’t committed a crime with those who have been convicted of serious crimes such as murder and sexual assault.

Eric Largy asked that his recommittal hearing last month be opened to the public in Merrimack County Probate Court. Such hearings are generally closed to the public and reporters.

The state had sought a six-month extension, which was delayed because Largy underwent heart surgery in November. The additional six months expires May 15.

Probate Judge David King has issued an order since the hearing, but he filed it as a confidential document. King also closed Largy’s file to the public. Stewart declined to comment on the confidential order.

“Better late than never,” Stewart said of the move, adding he doesn’t know why Largy wasn’t “stepped down” to the New Hampshire Hospital years ago.

The New Hampshire Hospital is a locked facility, but patients can earn much more freedom there and eventually may be able to leave the campus. It is run by the Department of Health and Human Services so Largy will now have a different treatment team.

Largy had a reputation of being a “complete gentleman” and was not involved in any violent behavior at the secure unit, according to Dr. Daniel Potenza, director of forensic services at the Department of Corrections.

Potenza testified at the hearing that Largy’s commitment should be extended saying he had refused treatment and still suffers from a delusional disorder. Potenza testified that Largy includes the treatment staff at the secure unit as part of the “conspiracy” to keep him locked up.

Stewart said the staff at New Hampshire Hospital will assess Eric Largy and come up with a treatment plan.

Before Largy would be released, the staff at New Hampshire Hospital would make sure he has a place to live and would help him file for Social Security disability insurance, Stewart said.

“Privileges are earned. They don’t just give them to you. He could go out in the courtyard. He could have gym time. It’s a much better facility,” Stewart said.

Stewart said he recently represented a client who committed a serious assault on par with what Largy was accused of. That client pleaded guilty and spent one and a half years in prison, he said.

“I hope he gets released. Either the commitment expires or they ask to renew,” Stewart said. “As far as I can see, Eric’s the victim here.”

Because the law allows the state to come back again and again seeking to renew involuntary commitments, it can be much worse than a conviction, Stewart said.

“What would you rather have, a date certain or years ad infinitum? They can go on forever,” Stewart said.

Assistant Attorney General Megan Yaple wrote in her motion to recommit Largy that he is “in such a mental condition as a result of his mental illness as to create a potentially serious likelihood of danger to himself or to others.”

Yaple also noted that Largy had not had any behavioral problems and was able to follow the rules while at the Secure Psychiatric Unit.