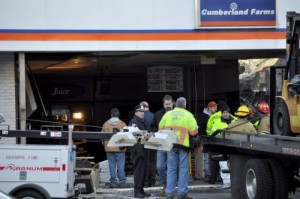 Emergency workers at the site of a crash at a Cumberland Farms convenience store that took the life of Kimmy Dubuque, 43, of Chicopee, Mass., in 2010.

A Massachusetts jury Tuesday awarded $32.4 million, plus interest, to the family of a woman struck and killed by an out-of-control SUV in a case that highlighted the surprisingly common phenomenon of storefront crashes.

The verdict was a victory for the husband and daughter of Kimmy Dubuque of Chicopee, Mass. Dubuque was 43 when she was pushed through a wall by the SUV as she was about to enter a Cumberland Farms convenience store in her hometown in November 2010.

Lawyers for the Dubuque family contended that Framingham, Mass.,-based Cumberland Farms, one of the nation’s biggest privately held businesses with stores and gas stations blanketing the Northeast, was at fault in the death. Despite repeated problems with cars driving at high speeds into the Chicopee store’s parking lot, they argued, Cumberland Farms failed to install bollards, safety barriers common in retail parking lots.

In addition, despite hundreds of previous “car strikes” at Cumberland stores, the Dubuque lawyers accused Cumberland Farms of dragging its feet in installing bollards throughout the chain. Even when an extensive effort began in 2011, the lawyers said, about 250 to 300 stores – roughly half of the chain’s outlets — were excluded. In addition, evidence shows that after determining that arrays of 6-inch-wide bollards could be installed at a per-store cost of $3,000 to $3,500, Cumberland Farms switched to narrower posts and thinner steel to save money.

“There was very good evidence of a long pattern of neglect on the part of Cumberland Farms,” said Paul S. Weinberg, one of the lawyers for the Dubuque family.

Another lawyer for the Dubuques, Robert J. Lefebvre, said his clients were “elated” by the jury’s decision. “Their concern has been the dangerousness of a lot of these type of locations,” he said. “Nobody has taken this issue seriously. It takes something like this to get a company or an industry to be proactive about their safety measures and protecting their customers.”

Lawyers and spokespersons for Cumberland Farms failed to respond to repeated requests for comment. In a court filing, the company said the 81-year-old SUV driver, who apparently suffered a stroke or another medical episode, was “wholly liable for damages … because he lost control of his motor vehicle and drove it at a very high rate of speed.”

Weinberg said he “would not be surprised” if Cumberland Farms appealed, and noted that the company has 10 days to file a motion for a new trial.

The accident that took Kimmy Dubuque’s life was far from an isolated event. Cumberland Farms alone had 485 “car strikes’’ from 2000 through 2009 at its 500-plus East Coast convenience stores, according to records submitted in the Dubuque case. Likewise, 7-Eleven once disclosed having more than 1,500 incidents over a seven-year period. In recent years, crashes on store property also have occurred repeatedly at other big-name retail chains such as Starbucks and Dunkin’ Donuts.

As FairWarning has reported, many safety experts say that for a modest cost — often $10,000 or less — bollards or other barriers can be installed that give customers, employees and pedestrians substantial protection from vehicles that otherwise might jump a curb and careen into a store. Still, safety specialists and plaintiffs lawyers say some big chains and other businesses, as well as shopping center owners, have done too little to reduce the risks.

No federal agency keeps figures on such accidents. But a FairWarning review of news reports from early April 2013 through early April 2014 found that at least 16 customers, employees or bystanders were killed in crashes into store buildings or adjacent property. At least 587 others were hurt, 121 seriously, during the 12-month period. The figures are certainly an undercount, since not all of the accidents make the news.

Along with the $32.4 million awarded by the state court jury in Springfield, Mass., the verdict includes another roughly $15 million in interest. That was based on a calculation that took into account the case being filed in May 2012.