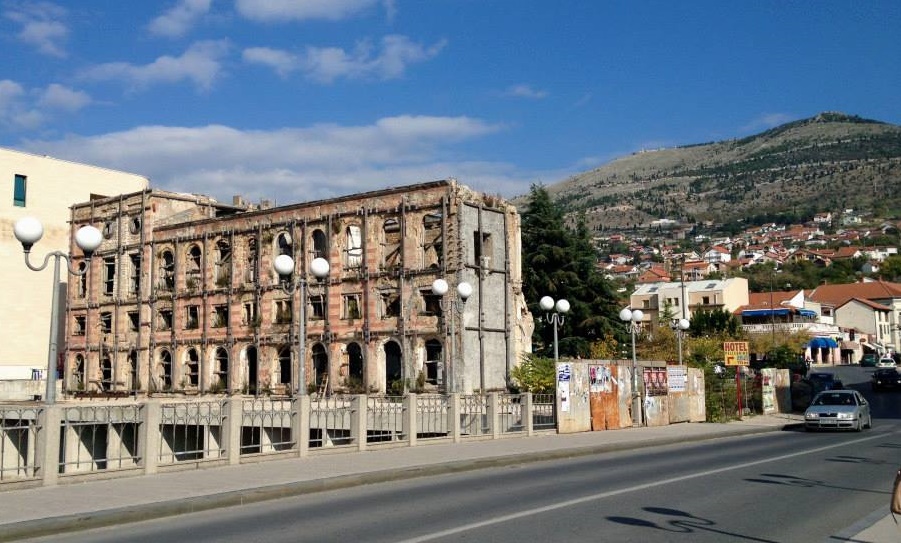 Destroyed buildings in Mostar, which were bombed by Bosnian Croat forces in 1993. 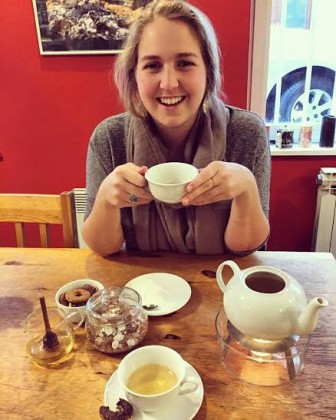 Last week I took an hour-long bus ride with a friend to Zenica to help facilitate an English conversation group with some of local high school students. I felt relaxed and excited, eager to meet some new people and visit a city I hadn’t traveled to before.

It was a lazy Sunday morning and we took our time getting to the bus station, which is not far from the city center. We grabbed some traditional cheese pies wrapped in oil-soaked paper for lunch, and crumbs coated my lap shortly after our journey got underway.

Unlike the many bus rides I have taken south to the Herzegovina region, this trip took me northwest from Sarajevo, meandering around hazy hills, with dry and scrubby brush coating the countryside, occasionally punctuated with clusters of boxy concrete homes.

The winter haze hung grey in the air as we drove past a sprawling factory in the town of Kakanj and rounded a mountainside into Zenica, Bosnia’s fourth largest city.

I didn’t know what to expect when the teacher greeted us at the station. He was friendly and talkative, and gave us a brief tour along the riverside to the dimly lit café bar where the event was taking place. A small congregation of high school and university students sat shyly around a common area, sipping espresso and chatting among themselves.

At first we were all a little shy. My friend and I approached the first table timidly, but the two girls seated there were friendly and eager to speak with us. Before long we were laughing together and sharing stories about where we came from. The girls were university students and we made small talk about our studies and our hometowns.

Although I expected questions about life in America, the students were even more eager to know what I was doing in Bosnia and Herzegovina this year. What was I doing here? Why did I pick Bosnia? How hard is it to learn the language? Did I like the food?

We rotated around between three different tables and spoke with students of science and international affairs and nursing, and two ballet dancers from Serbia and Bulgaria working as dance instructors in a local school. Our conversations flowed easily, and for the most part their English was advanced.

At one point in our conversation, a student asked me hopefully about the opportunities I knew about for her to apply to work in the United States. I offered a couple of ideas, mostly programs I had heard about from Bosnian friends who had worked with a volunteer program in North Dakota or Tennessee, washing dishes or waiting tables while earning three times than they could at home.

But I was struck by the irony of this question, and my own uncertainty in how to respond, since I have never had to seek out a method with which to enter the United States. Living in Bosnia and Herzegovina often makes me think about how much I take my citizenship and my passport for granted.

And reflecting on an issue not isolated to the Balkan region alone, I have not faced discrimination or profiling at airports for having a Muslim name.

These are privileges I grew up with America, and ones I see differently now that many of my friends face countless obstacles in their attempts to leave the country for educational opportunities or work abroad.

It is a strange time to be representing America abroad with so much international spotlight on the presidential election and gun violence, topics I am asked about wherever I go.

I don’t know how to respond to these inquiries except to share my own strong opinions, but I can’t help feeling defensive against assumptions that my own views align with the foreign policy decisions of my country.

In Mostar, I often sat on the couch with my host mother, watching Turkish soap operas before bed while my host dad reclined smoking his hand-rolled cigarettes, with loose tobacco in a paper box labeled “AMERICAN CIGARETTE.”

On several occasions, our conversations turned to the subject of America’s attitude towards Muslim countries, and my host parents would ask me, sincerely, to explain to them why America was always making war in Muslim countries, why the wars never happened in America, why we thought we had the right to invade everyone else’s country when those countries would never be able to do the same for us.

There is no easy way to answer these questions.  I’m often doing a balancing act, distancing myself from these policies when I can, but also trying to explain aspects of the American mentality that are important in order to understand how many Americans view our country’s role in the world.

Our conversations often ended with the acknowledgement that there exists a great deal of prejudice and misunderstanding of Islam and Muslim countries in America. Before we switched off the TV and headed to bed, my family would leave me with one request. “Write about this, so people will know.” So that is what I’ll do.

Sarah’s View from the Borderlands is Sarah Freeman-Woolpert’s biweekly column for InDepthNH.org. Freeman-Woolpert is originally from Pembroke, New Hampshire. She graduated from The George Washington University in 2015 and is currently spending 10 months in Bosnia and Herzegovina conducting research on youth activism and civic engagement. To read more of her writing, visit her blog at stilllifesarah.blogspot.ba.