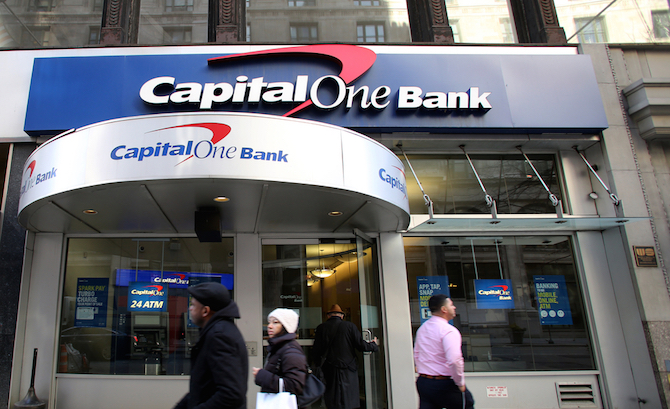 This story was co-published with The Daily Beast.

Several years ago, Capital One gave Oscar Parsons, 46, his first credit card. At the time, he didn’t need a loan. But he banked at a Capital One branch near his Bronx apartment, and when it was offered, he thought, “Why not?”

Initially, he had little problem keeping up with the payments. But after a run of construction jobs came to an end, he fell behind and found himself ducking the bank’s collections calls, he said. Each time the company’s TV commercials popped up, asking, “What’s in your wallet?” Parsons thought: “It’s not enough to pay you back.”

This year, Capital One provided Parsons with another first: his first lawsuit. For failing to pay his $1,800 debt, the company took him to court. Currently on public benefits and in a job training program, Parsons has nothing Capital One can take. But should Parsons find work, Capital One could use a court judgment to seize money from his bank account or take a portion of his wages.

It was a hard lesson — one learned by hundreds of thousands of the bank’s cardholders. No lender sues more of its customers than Capital One, according to ProPublica’s review of state court data.

Over the past year, ProPublica has sought to illuminate the scope of debt collection lawsuits, which, though they are often filed by public companies in public courts, are a largely hidden part of the nation’s financial life. The suits hit workers who earn below $40,000 a year the hardest and federal garnishment laws provide scant protection. Even workers near the minimum wage could have a quarter of their take-home pay taken or their bank accounts cleaned out. State laws typically offer little more protection.

To identify which companies file the most collection suits, ProPublica obtained and analyzed court data from 11 states. In every state, Capital One stood out.

During the years of the recession, particularly 2008 through 2010, when the number of credit card defaults surged, many banks filed more lawsuits. But Capital One dwarfed them all, reaching levels never matched by any company before or since, according to ProPublica’s review of data going back to 1996.

By our estimate, the suits exceeded half a million per year nationally during those peak years.

Since 2011, Capital One’s suits have dropped considerably, though they have continued to far exceed the totals of any other bank. For example, in Indiana counties for which court data is available — home to about two-thirds of the state’s population — the bank filed about 3,360 suits in 2014. That’s about a quarter of the suits Capital One filed in 2010, but still more suits than all other national banks combined in 2014. In Clark County, Nevada, which includes Las Vegas, Capital One’s suits comprised about 40 percent of all suits by major banks. In Miami-Dade County, Florida, the tally was about the same.

Capital One began filing a large volume of suits in Clark County (which includes Las Vegas) starting in 2005. The suits reached their peak in the years around the Great Recession. In 2009 alone, Capital One filed about 10,000 suits. Since 2011, the bank’s suits have declined and numbered 1,119 in 2014.

The suits, often over debts as small as $1,000, reveal a largely hidden side of Capital One’s business. The bank has only the fourth largest credit card portfolio (as measured by both numbers of cardholders and balance size), but such a large portion of its cards are held by those with poor credit that it is the country’s largest subprime lender. With those loans comes a high risk of default, and the company is particularly aggressive at recouping losses.

Capital One’s subprime borrowers live life on the edge, said Steve Brobeck, executive director of the Consumer Federation of America. “A large majority of these cardholders carry balances from month-to-month,” he said, because they can’t afford to pay off the balance.

The “disturbing” volume of suits filed by Capital One should prompt regulators to investigate whether the perils of subprime credit cards outweigh the benefits, Brobeck said.

A Capital One spokeswoman said the bank serves an important function by providing credit to large numbers of borrowers who might be unlikely to get it from other banks. When customers fall behind on payments, she said, the bank makes every effort to work with them.

“We will not sue anyone working with us, no matter how small the payment,” said spokeswoman Tatiana Stead. But when customers don’t pay, she said, “we have an obligation to recover some of our losses so we can offer the best pricing to our customers.”

Capital One’s suits are notable not just for how common they are. The company also files suits over much smaller debts than other banks.

In 2013, the typical debt in a Capital One suit filed in New Jersey was about $1,500, according to ProPublica’s analysis of state court data. The typical debt in a suit brought by other major issuers like Citibank or Bank of America was more than three times as high. ProPublica found a similar gap in other states.

Capital One offers cards with a credit line often as low as a few hundred dollars to customers with poor credit. On the bank’s website, the cards carry annual interest rates as high as 25 percent. After making payments for five months, customers’ credit limits can increase.

Capital One began filing a large volume of suits in New Jersey starting in 2000. The suits reached their peak in the years around the Great Recession, particularly 2008–2010. In 2009 alone, Capital One obtained over 41,000 court judgments.

Kevin Thomas, an attorney with the nonprofit New York Legal Assistance Group, often represents clients sued in Bronx Civil Court by Capital One. He said his clients frequently started with low-limit cards, but after Capital One raised their credit limits, their balances grew, the interest mounted and they lost control. Then, although their debts were not large, typically between $1,000 and $1,500, they ended up in court, he said.

Lawsuits over even small debts can provoke a crisis for low-income debtors. Patricia Boglin, 51, of Woodbridge, Virginia, works as a school bus driver, earning about $26,000 a year. When Capital One sued her over a $1,878 debt late last year, she said, she panicked. Would the bank try to foreclose on her house to force repayment? “It just terrified me,” she said.

That a collection lawsuit could lead to foreclosure is a common fear among defendants, said Jay Speer, executive director of the nonprofit Virginia Poverty Law Center, even though it’s extremely unlikely. Of course, the realistic consequences of a suit — garnishment or a lien being placed on the debtor’s home — are serious.

The Color of Debt: How Collection Suits Squeeze Black Neighborhoods

Our first-of-its-kind analysis shows that the suits are far more common in black communities than white ones. Read the story.

Boglin did not want to risk it, so she filed for bankruptcy under Chapter 13.

How banks handle delinquent accounts is largely shielded from public scrutiny. They aren’t required to disclose how many suits they file. And the role of debt buyers — companies that purchase accounts from banks at a steep discount, then try to collect — further obscures what happens to customers who don’t pay.

To generate a national estimate for Capital One’s suits, ProPublica looked to Encore Capital Corp., the nation’s biggest debt buyer, which voluntarily disclosed the number of suits it had filed nationally until 2010. That year, the company reported having filed 517,000 suits.

Capital One filed about 40 percent more collection suits than Encore in 2010 in the states for which ProPublica has data, indicating that the bank filed at least half a million suits that year nationally and potentially hundreds of thousands more. Our data showed even more suits in the two preceding years.

Capital One declined to respond to this comparison or provide a count of its suits.

After 2010, Encore Capital, under scrutiny for its litigation practices, stopped disclosing the number of suits it had filed. A spokesperson for Encore did not explain the decision beyond saying, “as we have diversified and grown as a company, we continue to evaluate what disclosures are appropriate for our investors.”

Capital One has also sold debt in the past. Stead, the bank’s spokeswoman, declined to provide detail on its debt-selling practices, but said the bank’s “strong preference” is to do its own collecting.

The lack of transparency leaves both borrowers and policymakers in the dark, said April Kuehnhoff, an attorney at the National Consumer Law Center. “We need more data about debt-collection practices by both debt buyers and original creditors so that we can improve debt collection laws,” she said.

ProPublica contacted the six largest card issuers for this story, and all were guarded when it came to details about their approach to collections.

Citibank and Bank of America declined to respond to questions. Chase stopped filing lawsuits or selling its debt in 2011, after a whistleblower identified flaws in the bank’s collection practices. Those problems led to a consent agreement with regulators in 2013.

Discover filed the second-most suits, according to ProPublica’s analysis. It, too, declined to comment. Like Capital One, Discover’s volume of suits was also disproportionately large given the bank’s relatively small market share — Discover is the sixth-largest card issuer.

American Express, the fifth-largest issuer, filed relatively few suits. Spokeswoman Sonya Conway said the bank has not sold its debt in the past six years and had no plans to do so.

Federal regulators say they are alert to the potential for abuse through debt collection lawsuits, but it’s unclear that consumers should expect any more transparency in the near term.

Banks should “consider the risks of excessive litigation,” said Bryan Hubbard, spokesman for the Office of the Comptroller of the Currency. The regulator has also publicly urged banks, when selling debts to buyers, to “consider selecting debt buyers who limit their use of litigation.”

The federal Consumer Financial Protection Bureau is in the process of writing new rules for debt collection that are expected to cover a wide range of activities, including the filing of lawsuits. A spokeswoman declined to comment on whether the CFPB tracked the number of collection lawsuits filed by banks or planned to in the future.

A number of the bureau’s past enforcement actions have centered on debt collection litigation practices. It filed suit against the largest collections firm in Georgia, Frederick J. Hanna & Associates, which counts Capital One among its clients. Calling the firm a “debt collection lawsuit mill,” the CFPB alleged attorneys often filed suits with faulty information. The law firm disputes the allegations, and the suit is ongoing.