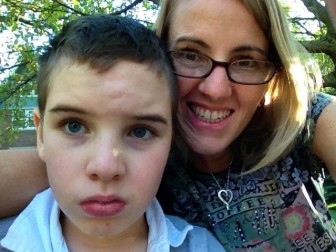 Maria La France, founder of Iowans for Medical Marijuana, has seen a glimmer of hope for her son, Quincy, who has suffered from severe seizures since age 2. He is now 14.

When Logan Edwards returned home to Davenport in 2008 after his deployment in Iraq as a Marine, he was anything but the same.

Having just turned 21, he started using alcohol to cope with his anxiety, insomnia and nightmares. Suffering from post-traumatic stress disorder, better known by its initials PTSD, Edwards drank every day for six months before seeking help. By the time he got it, it was almost too late.

After a very long journey with many trials and errors and finding no real relief, Edwards, now 28, said he found a way to live his life in a functional and productive manner through the advice of a Vietnam vet. That advice: smoke weed.

Edwards said his life immediately started to take a change for the better once he started smoking marijuana; however, he found a major problem in this: Iowa doesn’t allow it.

Iowa’s Medical Cannabidiol Act that became law in July of 2014 allowed the use of cannabidiol, or CBD, to treat intractable epilepsy.

At first glance, the law seemed like a major breakthrough for Iowans who had been advocating for medical marijuana, but the act leaves out two important pieces to the story: where the caregivers and patients can obtain the CBD and what is being done for those who feel the need for medical marijuana but do not have epilepsy.

Changes to address those issues in the law don’t appear to be coming anytime soon. “The Republicans have no plans to bring it up as an issue,” Sen. Joe Bolkcom, D-Iowa City, the floor manager of a bill that would loosen access to CBD, said. “I think it will be an uphill battle next Legislature.”

The current law put the University of Iowa in charge of researching the effects of CBD on epileptic patients. The drug CBD derives from the cannabis plant but contains no THC, the part of cannabis that gives the high effect that opponents of any marijuana use focus on.

GW Pharmaceuticals, the company that provides the CBD for the UI’s research has been researching medicinal marijuana for more than 16 years and is in charge of a nationwide study for this research. The Food and Drug Administration and the Drug Enforcement Administration have approved 450 children to participate in the Expanded Access Program, also know as the Compassionate Use.

Dr. Charuta Joshi, a clinical associate professor of pediatrics with specialties in neurology and epilepsy, is the principal researcher in the study at the UI. She said 17 people are participating but that the research team is still recruiting. She was unwilling to give information on the early results of the study because it is still in progress.

Schultz said CBD has been “effective in reducing total seizures in these patients with a very tolerable side effect profile.”

But with only 71 registration cards issued for patients in Iowa, more people are waiting on the Legislature to help. All 71 of these patients have to cross state lines to obtain the CBD and break federal laws by transporting back to Iowa.

At one point Edwards spent around three months driving back and forth from Iowa to Colorado to purchase four to six ounces of marijuana each trip for his personal use.

This system initially was working for him, but the fear of jail became too overwhelming he said. He decided to move to Denver, Colorado, in 2014.

“Things have just gotten much, much better,” Edwards said. “I’m doing great here. My biggest complaint is having to fly or drive back to Iowa to see my daughter.”

Senate File 484 was the next step in legislation proposed to solve these issues and make medical marijuana a reality in Iowa. The Iowa Senate passed the bill on April 15, but the likelihood of it being passed in the House next year is low.

This bill would add on to the previous Medical Cannabidiol Act, allowing the production and sale of marijuana for medicinal purposes within the state, and adds several “debilitating medical conditions” that can be treated with medicinal marijuana, such as cancer, HIV/AIDS, multiple sclerosis, PTSD and other illness causing severe and chronic pain.

“I’ve worked closely with patients and their families who suffer with chronic and debilitating conditions who have wanted to have access to cannabis as medicine,” Bolkcom said.

Opponents of the bill Bolkcom drafted said it has too many flaws.

Sen. Mark Chelgren, R-Ottumwa, said that while he supports medicinal marijuana, “I am not so arrogant to think more about what should go in people body’s more than they or the doctors do.” He said he only supports “any products that are considered to be medicinal in power.” And that, “until it goes through the medical proofs and is tested, its not medicine.”

Chelgren said Bolkcom’s bill is part of a political agenda and accused Bolkcom of grandstanding. “He wants to get points for re-election more than he actually wants to help,” Chelgren said.

One of the reasons for this is that Chelgren said the bill “completely ignored federal laws.” He is referring to the federal government’s legal classification of marijuana, an issue Sen. Michael Breitbach, R-Strawberry Point, also found troublesome.

The federal government considers cannabis to be a schedule 1 drug by, meaning that it has no medicinal value and has a high potential for abuse. “Most doctors and labs can’t even do research on it without losing their license,” Breitbach said.

More research and experiments could be done for a better understanding of the effects and how to prescribe cannabis if the federal government were to reclassify it as a schedule 2 drug, Breitbach said. “I don’t feel we will see widespread meaningful research until that happens,” he said.

While Iowa can reclassify the drug itself, as the other 23 states that have legalized medical marijuana have, some do not support this route because the federal government could prosecute.

Breitbach said the Obama Administration has said it won’t prosecute but he said he doesn’t know if the next president will take a different stance.

Bolkcom said, “It’s hard to imagine that anybody running to be president of the United States would undermine the work that’s been done in over 20 states.”

Breitbach’s other issues with the new bill are that it does not allow for someone to be in charge of dosages, that other states have not been able to sufficiently control THC levels in oils, and that the bill refers to PTSD as a condition that can be treated with medical marijuana, which he doesn’t support.

The bill was rushed to get passed, not leaving enough time to discuss these issues and attempt to fix them. “We can and will make a better bill than the one that passed the Senate this year,” Breitbach said.

A Des Moines Register Iowa Poll earlier this year found that 70 percent of Iowan adults support legalizing marijuana for medical purposes. When changes matching the polling will be made is hard to answer.

Until the legislation can find a way to agree on how to make this work, people like Edwards will continue to wait, or move.

Edwards works 50 to 60 hours a week in Colorado while coming to Iowa to see his daughter and family as often as possible. He said he knows marijuana is not a cure for PTSD but that, “it absolutely helps give sufferers a livable life instead of the constant anxiety and depression.”

Parents like Maria La France, founder of Iowans for Medical Marijuana have seen a glimmer of hope for her son, Quincy, who has suffered from severe seizures since age 2. He is now 14.

Quincy is taking a natural based cannabis oil that is grown in Colorado. “He isn’t seizure-free yet, but his seizures have reduced. He is recovering faster, and he id doing better in school,” La France said.

As a parent and a member of Iowans for Medical Marijuana, she said she would like to have access to marijuana locally. “If medical cannabis was legalized, we would have more flexibility to change dosing amounts and try different strains,” she said.

She said this battle is frustrating. “It’s morally wrong for lawmakers to not allow this treatment when lives can be saved.”

“I think it’s important to look at cannabis as a plant that has tremendous potential for helping, and anything can be abused,” La France said. “I don’t want to encourage young people to go out and do it,” she said about using marijuana, “but there are people who really need it.”

“This option should be available to anyone who is sick and has found this to be helpful for their condition.”