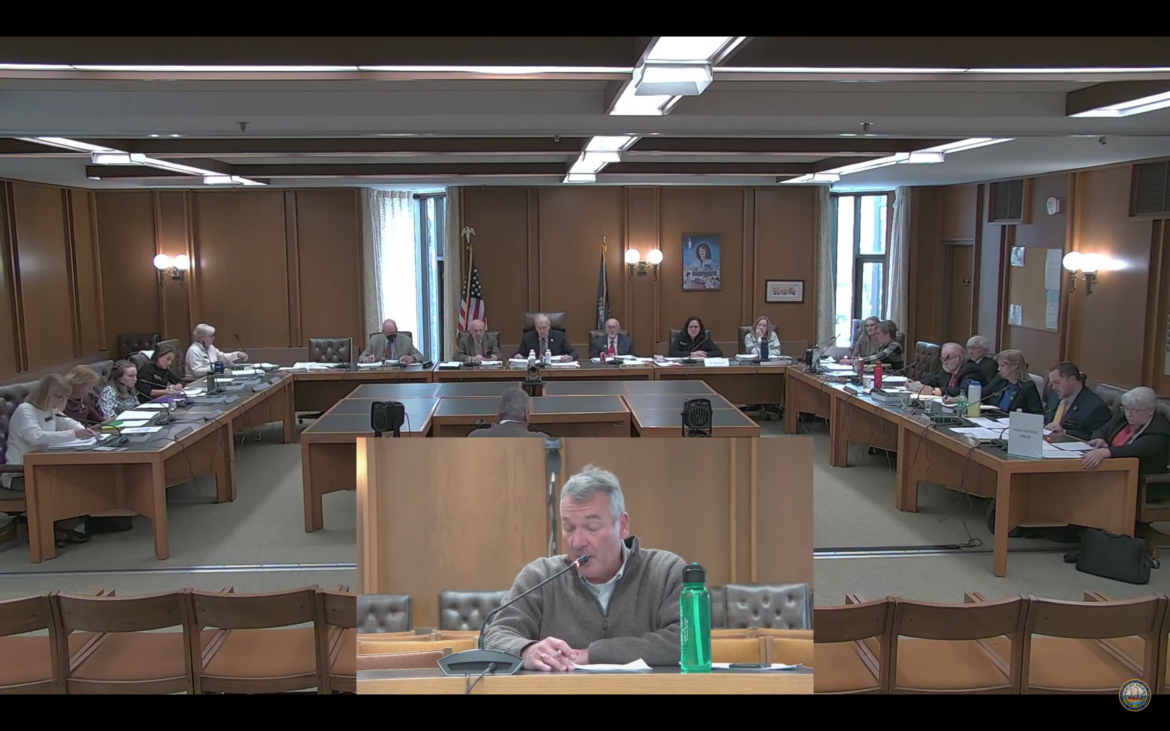 Rep. David Luneau, D-Hopkinton, speaks to the House Education Committee Wednesday about his bill to have the Department of Education take over administration of the Education Freedom Account program in this screenshot.

The program was included in the state’s two-year operating budget passed in 2021, and has been significantly over budget projections with more students than anticipated and what many view as insufficient oversight.

The bill, which had a public hearing Wednesday before the House Education Committee, would have the Department of Education administer and manage the program instead of the Children’s Scholarship Fund NH, which receives 10 percent of the program’s grant distribution under its contract with the state. The organization’s no-bid contract was approved by the Executive Council soon after the program was approved in the state’s operating budget.

The program allows the money parents receive to roll-over from year to year, unless the amount exceeds what would be a quarterly payment.

If the student graduates, leaves the freedom account program or is removed from the program for misuse of funds, the parents would be required to return any excess money to the Education Trust Fund under the bill.

Luneau and other supporters of the change say the program needs more oversight, accountability and transparency given the millions of dollars being distributed to parents.

The state has spent about $27 million during the first two years of the program, well above the $3.3 million budget Education Commissioner Frank Edelblut projected would be the cost.

He asked for $30 million each year of the next biennial budget in requests to the Governor’s Office.

Luneau told the committee that is $90 million in the first four years of the program coming out of the Education Trust Fund, and $9 million of it going to the scholarship fund.

He said he believes with added staff, the department could manage and administer the program for much less money and have the data needed for better accountability, transparency and assessment.

Why use tax dollars to pay the overhead of a private company, when you are already paying the department to oversee kids’ education in the state, Luneau said.

To date, about 75 percent of the funds for the program have gone as subsidies to parents of students who were enrolled in private or religious schools prior to the program’s start.

Of the 3,000 students in the program  this year, about 700 attended a public school the year before.

Luneau said the reports include the kids who were in private and religious schools before the program began to show how successful it is, but that is not saving any taxpayers money but is using money from the Education Trust Fund.

Luneau is prime sponsor of another bill prohibiting using the money as a subsidy for private or religious school tuition.

Supporters of the program sold it as a way for lower income parents to afford to find the best education opportunities for their students while saving property tax dollars for taxpayers.

Luneau said taxpayers who fund public schools receive a great deal more accountability, oversight and transparency of their tax dollars than they do in the freedom account program, adding the reports the scholarship fund has provided are laughable; they are so incomplete.

But several members of the committee who support the program said there is more data found on the department’s website that might provide some of what Luneau seeks, but he said it lacks specificity with summaries like what was paid to Amazon or the gross figure for computer devices.

“By establishing these guardrails we will improve the program and make it more accountable and more transparent to taxpayers,” Luneau said “and give it some real oversight by the legislature like public school programs have with a light touch.”

He noted Edelblut said on a local television program he had seen information that indicates there is no abuse or fraud in the program, but when Luneau said he asked Edelblut directly what information he reviewed, he avoided the question.

“I am not at all confident the law put into the current state budget provides any information flow to the Department of Education let alone the commissioner,” Luneau said, “that is sufficient to provide any satisfaction that there is no fraud or abuse in this program.”

If the department has access to that material, then it ought to be reviewed and provided in the same way as done for public schools, Luneau said.

Committee vice chair Rep. Glenn Cordelli, R-Tuftonboro, said an annual audit is required under the law and the children’s fund provides quarterly reports which are on the department’s website.

He noted the law is based on the Senate’s version of the program and does not have some of the provisions included in the House bill. A bill with those provisions will be heard later, Cordelli noted and would help with accountability and transparency.

He said that the bill would allow for multiple organizations to administer the program with a request for proposals to be issued. He noted the Children’s Scholarship Fund NH was the only organization qualified based on the law.

“I am not sure where the holes you see in the program are,” Cordelli said to Luneau. “The best accountability is with the parents. If they are unhappy with what’s going on, they walk. That is not always easy and does not happen in a public school.”

Luneau responded his concern is the sheer lack of information released by the department.

“It is impossible to tell if this taxpayer money is spent appropriately,” Luneau said, and it is impossible to get the exact material (the commissioner) reviewed.”
Committee chair Rep. Rick Ladd, R-Haverhill, asked Luneau if he had worked with the department to obtain what moving the program administration to the agency would cost and if it would be cheaper than having the contracted services.

Luneau said he had not gotten a specific amount for the change, but noted school districts with more students than the freedom account program do the work with a few staff members.

He suggested the department could develop a staffing plan very quickly, noting they developed rules for the program in a  few months once it was approved. “They can act very quickly when it comes to the EFA program,” Luneau said.

According to the electronic sign-up sheets, 68 people favor the bill and six oppose it.

The committee did not make any immediate recommendations on the bill.